What should audiences expect from Get Raunchy?

You’ll see a series of hilarious sketches, from dealing with growing questions from a six-year-old through to selling an innovative idea to a Dragon’s Den panel. Just bring a box of tissues because you are going to need it; belly laughing.

We wanted to express ourselves as grown women who have gone through career changes and motherhood. We wanted to share our thoughts and opinions; the good and the bad in a comical way.

Who are the BiBi Crew?

We started in the 1990s in response to a group of young black male performers called The Posse, who were so funny. I thought, ‘there should be a group of women doing this’. So I got some numbers from my little black book and the BiBi Crew were birthed.

The name came about because in the 1990s there were a lot of music groups from America who had “Crew” in their name. “BiBi” means “lady” in Swahili, which is an east African language; and we are women of African descent.

There were originally seven but now there are five of us: Judith Jacob, Suzette Llewellyn, Josephine Melville and Suzanne Packer.

We created, directed and performed for a number of years before taking a hiatus to develop other projects.

This is when I came into my own as a teacher.

So you are a teacher as well. How long have you been doing this?

I gained a B.Ed (Hons) in Speech and Drama and have been in education ever since. This allowed me to be able to raise my family. However, this meant I did not perform onstage for a number of years.

BiBi Crew began bubbling up again around 10 years ago.

That’s a difficult one. One’s non-fiction real and the other is fiction. I suppose they are equal.

When performing you never know how people are going to respond but when you hear an audience laugh that really does make you feel connected.

That’s a challenge and a reward. As a teacher, the challenge is to engage students and get them to listen to you. But if you reach out to a student and they understand what is expected of them and they get the desired results they want then: bam, boom, bam!

They’ve got it. They have been listening and they have executed in their exam and they got the result they wanted.

How does that make you feel?

On top of the world, like a performer on stage hearing the audience laugh on a comedy night.

What role do you have within the BiBi Crew nowadays?

I am more involved in producing and writing. But you may see pop on stage.

What like Alfred Hitchock’s cameo appearances in his TV shows?

Exactly, carrying a light bulb in the background or holding up a projector scene.

This is not your first time performing at the Albany?

No. I previously performed in Peter Pan and Emily, in the late 1980s. It was the theatre’s first pantomime and I played the first black Sindy doll ever to grace the stage in the UK.

We had a wonderful time performing back then.  However, it was hard work; doing two shows a day. But this really honed my theatrical skills.

You also starred in the 1980s classic film, Babylon? 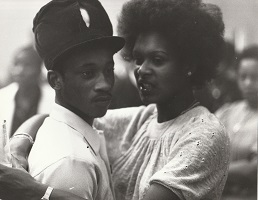 Yes. I played the girlfriend of the lead character, played by Brinsley Forde – lead singer of chart-topping reggae group Aswad.

It was filmed in South London, mainly around Deptford and Brixton.

Babylon is considered to be one of the great Black British films.

I am so proud to be a part of that history.

I think it is important for our young people to know what was life was like then compared to now and how much of a contribution we have made to British Society.