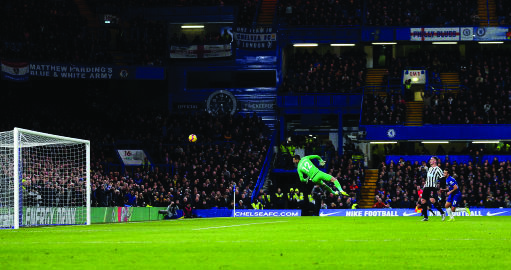 Willian scored a worldly as the Blues rediscovered their home scoring form in the league to put Newcastle to the sword, winning 2-1 at Stamford Bridge and secure three valuable points that puts them six points clear of fifth place Arsenal.

The Blues opened their account on eight minutes through a beauty by Pedro. The Toon equalised before a magnificent curler by the Brazilian lifted the 40,491 crowd.

While the result was as expected against lowly Newcastle, the overall performance was enough to cure insomnia. Only the obvious class of the two wide men shone in crucial moments.

Pedro opened the scoring on eight minutes when after a sequence of keep ball by the Blues, the ball was fed to David Luiz, who, from just on the half was line launched a long ball – at lest 50 yards, over the Newcastle defence. Pedro managed to judge his run perfectly, coolly tapped the ball and then produced an audacious chip over the advancing Martin Dubravka.

It was the Blues first league goal since David Luiz nodded home the second goal in the 2-0 defeat of Manchester City on December 8.

Salomon Rondon had a chance to equalise on 30 minutes after ex-Chelsea winger Christian Atsu, set up the striker. But he could only slice a left-footer from the edge of the Chelsea penalty area, over Kepa Arrizabalaga’s crossbar.

The visitors had a fantastic chance on 35 minutes when Ayoze Perez raced clear, but under a challenge from Cesar Azpilicueta,. Took his shot a little earlier than he would have liked. Much to frustration of the Toon Army, his effort went just wide of Kepa’s left upright.

Newcastle were set up to defend and hope for a set piece or quick break. And six minutes from the break, they goal that chance and took it.

Direct from a corner Ciaran Clark got between Luiz and Antonio Rudiger and directed the perfect header downwards and just beyond Kepa’s grasp to level the score.

Willian squandered a chance a minute later as the Blues dominant in possession, still looked like they concede a goal at any time.

The Blues restarted the second half with high intensity, and Pedro could have snatched a goal but his smart right-footer was well parried away by Dubravka.

But Brazilian Willian produced a brilliant strike all of his own making after receiving the ball from Hazard.

On the edge of the Newcastle penalty area, on the left. He took a shimmy touch before unleashing a wonder strike, curling the ball beyond the despairing dive of Dubravka and nestling the ball into his left side-netting.

Willian also did a Pedro a minute later. Latching onto another long ball by Luiz, Willian raced clear and attempted a lob over the goalkeeper, but this time the stopper managed to tap the ball away for a corner.

Callum Hudson-Odoi replaced Pedro with 11 minutes left on the clock.

There was little doubt that the Blues would hold on to their slim lead, and they duly ran down the clock.

Next up is a little matter of a derby in north London, on Saturday against Arsenal.