Ten minutes from full-time, with their team 4-3 up, there was grievance from some Crystal Palace fans at Wilfried Zaha’s perceived immaturity. The forward had just been booked after an altercation with AFC Bournemouth midfielder Jefferson Lerma before immediately trying to begin a scrap with Adam Smith.

A little over a minute later, Zaha was cupping his ears in front of the Holmesdale Road end. The groans aimed in his direction had diminished and instead he was lapping up the adulation of those same supporters.

Zaha had picked up a clearance from the free-kick which he had conceded, sprinted from his own half beyond two Bournemouth challenges and teed up Andros Townsend to cap a hat-trick of assists. It was Palace’s fifth goal and Zaha had been involved in all five. 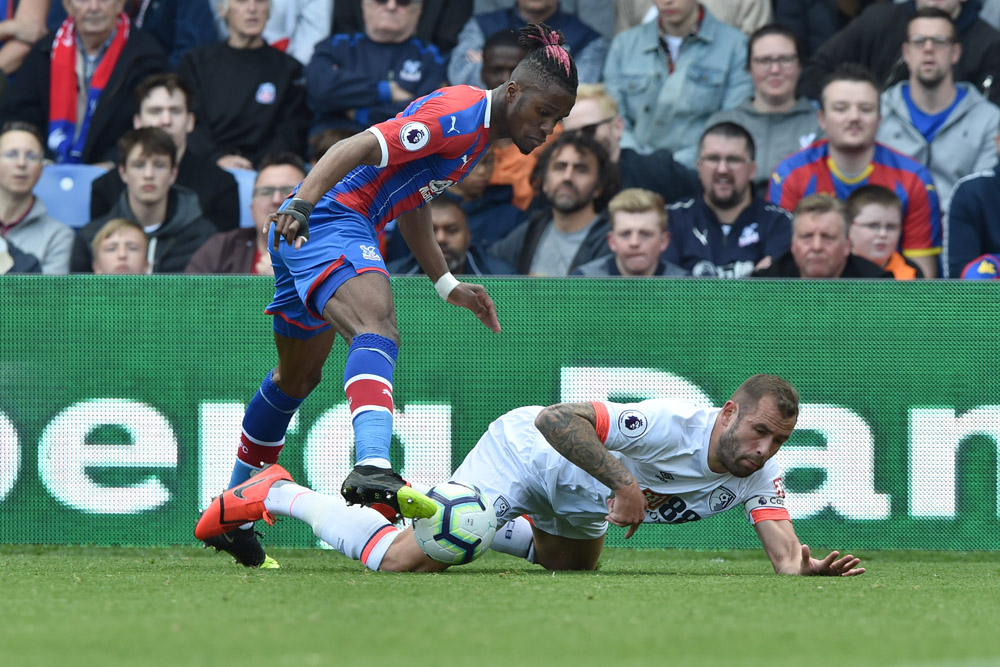 It was an encapsulation of Zaha in 60 seconds – frustrating and petulant, yet mesmeric, exciting and, ultimately, productive. If this was his final audition for a big summer transfer then it has got him the move.

This victory over Bournemouth, their highest-scoring at Selhurst Park this season, was a peek into the future and a reminiscence of the past. Julian Speroni and Jason Puncheon received respective guards of honour before they depart the club and Palace will hope that Zaha will also not be just a fragment of their history come August. 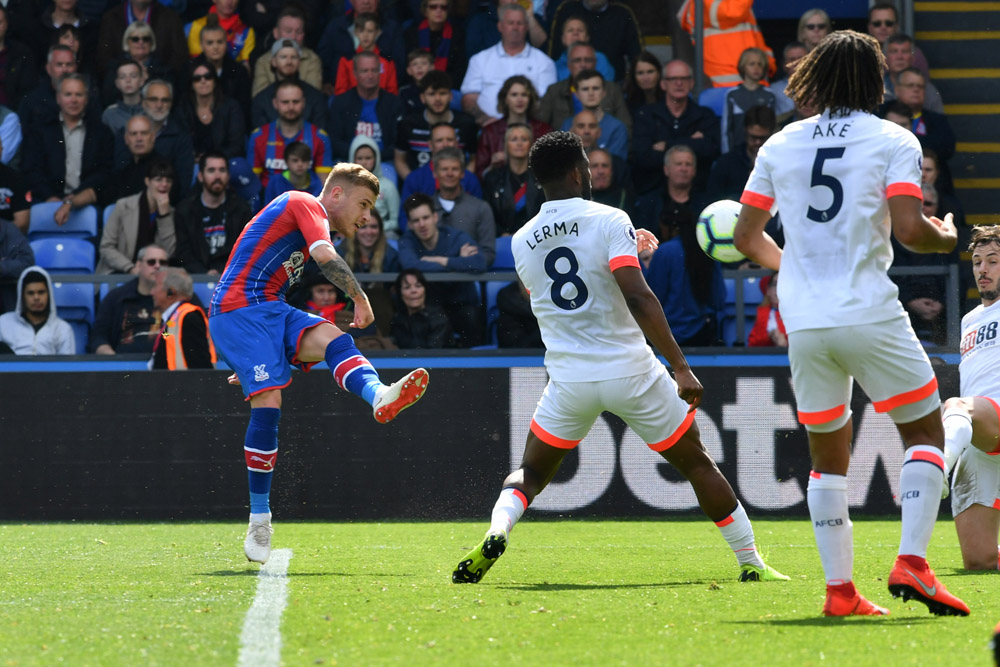 Sporting their new home kit for the 2019-20 campaign, Roy Hodgson’s side were excellent. If they had played like this at Selhurst Park all season then a top-half finish would have been easily achievable.

Luka Milivojevic had slammed an effort against the post before Michy Batshuayi gave the Eagles a quick-fire two-goal lead. Zaha’s cross deflected high into the air and young Bournemouth goalkeeper Mark Travers was hesitant to catch, allowing the Belgian to acrobatically finish from six yards. 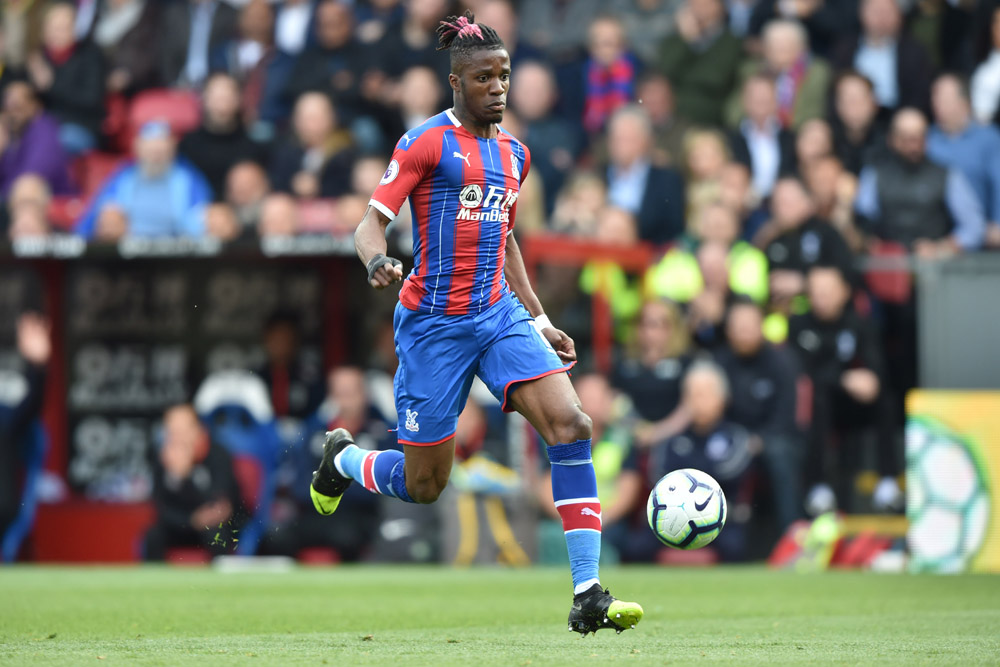 The excellent Aaron Wan-Bissaka then picked up a Zaha pass before firing across goal to give the on-loan Chelsea striker a far easier finish.

The only that that Zaha failed to do was score a goal. This was an attacking masterclass from the 26-year-old, whose parried effort was inadvertently turned into the net by Cherries defender Jack Simpson. 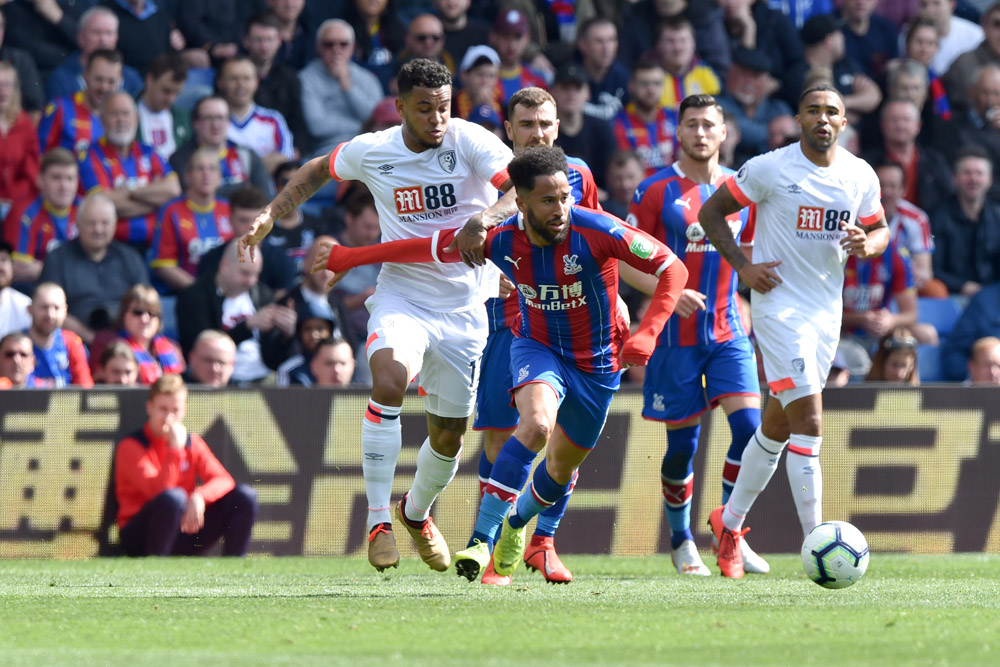 Lerma and Jordon Ibe made the game far tighter with strikes either side of half-time – the former a stunning 30-yard drive. But this Palace side, freed from pressure and without the need for a win, continued to thrive.

Patrick van Aanholt exchanged passes with Zaha to add his name to the scoresheet, but Josh King once again reduced Palace’s advantage to just one goal. 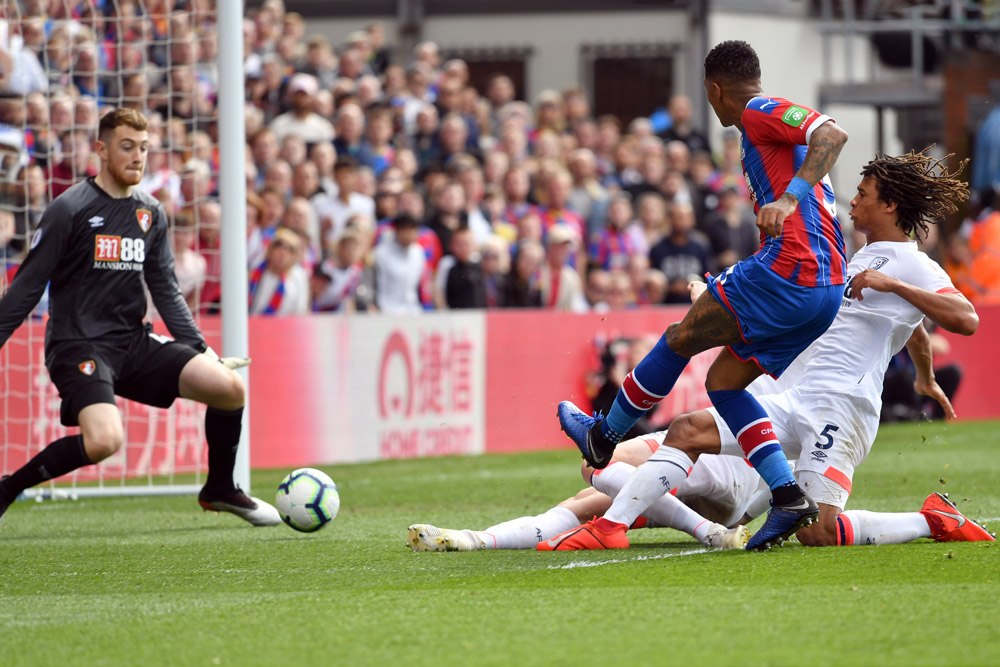 Then came the defining minute of Zaha’s performance. He fouled Lerma before twice attempting to shove the Colombian. Referee Roger East booked the forward, who immediately tried to involve himself in an altercation with full-back Smith. 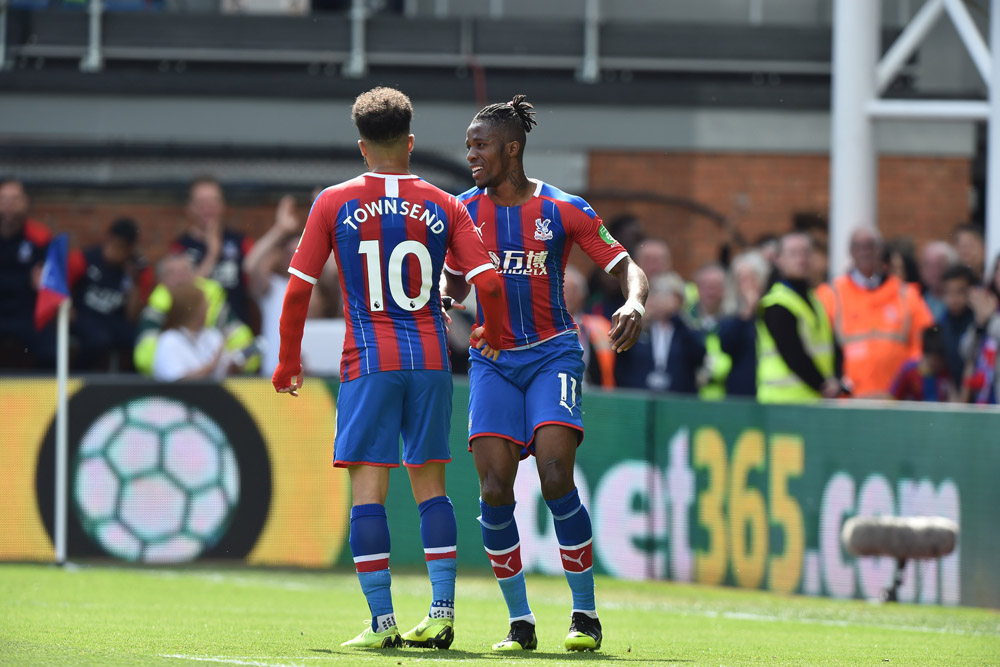 The resultant free-kick was cleared into Zaha’s path and, angered by the sense of injustice and with the Bournemouth fans booing his every touch, he galloped away from his own half. He sprinted past former Eagles full-back Nathaniel Clyne’s desperate lunge and swatted away an attempted push by Lerma.

Bearing down on the penalty area, he prodded the ball across goal for Townsend to finish. It is Zaha’s sense of maturity in the final third – and his improved ability to think quickly in front of goal – that has been the biggest difference to his repertoire this season. He may finally be ready to fit in at one of the Premier League’s top six. 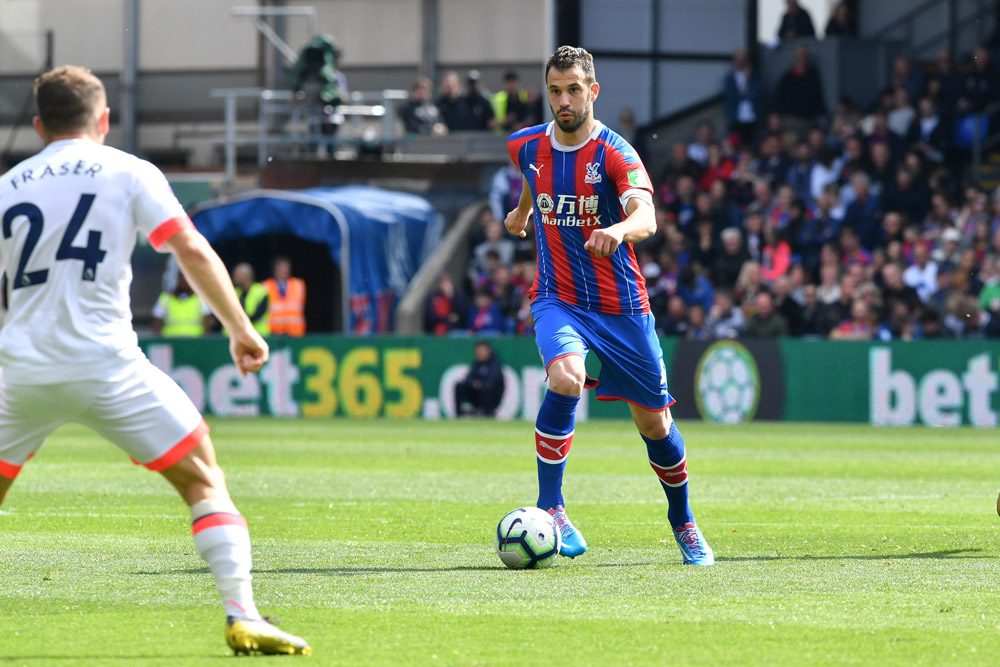 A club-record points tally for a 20-team Premier League campaign of 49 and clear signs of progression might be enough to convince Zaha and Player of the Year Wan-Bissaka to stay for at least one more year.

Palace’s home form has at times been disappointing, the performance in this victory papers over just four more wins in SE25. Over a quarter of Palace’s goals at Selhurst were scored in this final day success. 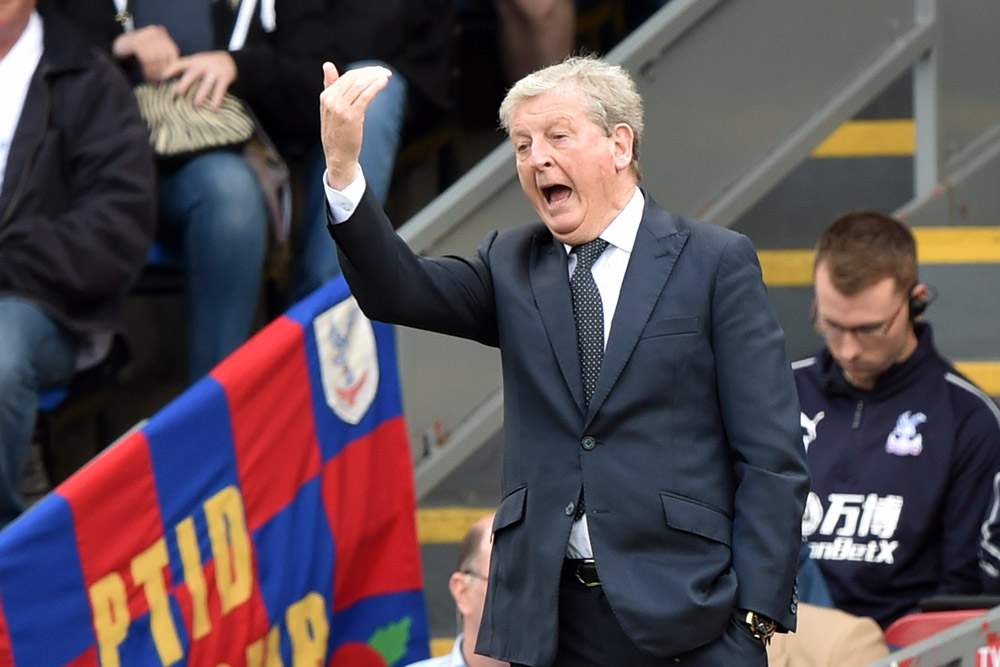 Otherwise, there can be little to complain about. An FA Cup quarter-final finish, victories at Manchester City and Arsenal, and 51 goals – another club Premier League record – prove that there is a positive platform to progress further next season. There was even time for an academy debutant in Luke Dreher, who was given his long-awaited bow as the clock ticked into added-time.

But progress once again relies on keeping Zaha. A player far more valuable to Crystal Palace than he is to any other club.