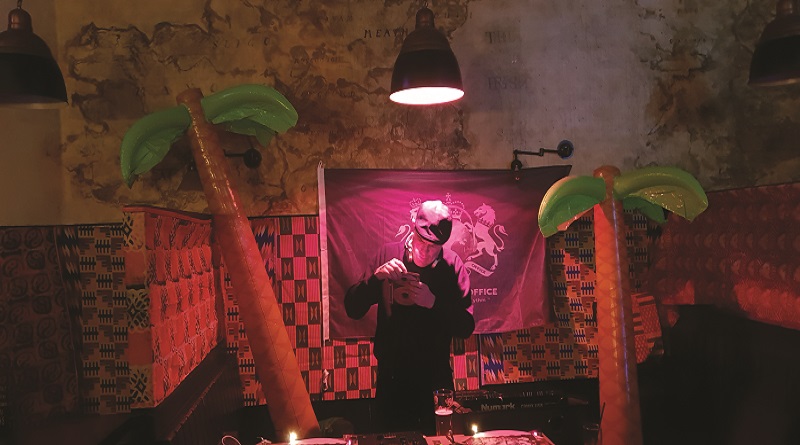 Through good music and a strong ethos on creating a family feel to their events, The Foreign Office want to celebrate diversity by being an open, friendly and inclusive collective with a strong desire to benefit, not only the local community but those on the margins of mainstream society.

They have joined with The Refugee Community Kitchen for their first event and hope to raise money for the work they do.

The Foreign Office is a collective of up and coming DJs and selectors from within
the underground world music scene in the UK.

With a strong influence from local artists, they are powered by local sound system ‘Stack Up Sound’ and have local artists such as Yaw Noir, Mad Max and Antz Boogie on the roster, with a few more highly talented and respected local DJs coming on board in 2020.

The venue is turned into a sea of colour and even has two 6ft tall inflatable palm trees to add to the tropical feel.

Drinks such as Aguapanela, a Latin sugarcane drink, Bissap de Burkinabe, a sorrel drink from Burkina Faso, Soursop juice, ginger shots and Palm Wine are all on offer as well as a games corner with backgammon, dominoes and Othello.

The night is run monthly on the last Saturday of every month with December 28 the next night on the calendar, at The Old Dispensary pub in Camberwell.

Ewan Smith, head of The Foreign office, said: “In all honesty, part of the idea behind the creation of The Foreign Office was to put two fingers up at the increasingly loud rhetoric that different cultures can’t or shouldn’t co-exist together – something that as a Londoner I disagree with strongly.

“The second part was simply that I wanted to start a completely new night, from scratch, get a team around me with similar beliefs and build it organically through great music, creating a strong, community focused ethos and producing events that look and feel different to the norm.”