A brave advertising executive will trek the Great Wall of China, a year after having to learn to walk again, to thank the surgeons who rebuilt her jaw – which had been destroyed by an aggressive tumour.

Samantha Levy, from Wandsworth, had to have part of her hip removed to reconstruct her jaw-bone – and the top networker was unable to speak for months at a time as the new bone set into place.

The 30-year-old is now raising money for Guy’s and St Thomas’ by trekking hundreds of miles along the famous landmark for seven to eight hours a day for seven days.

She is doing that 15 months after being unable to walk at all – because of the hole in her hip from where the bone was taken to rebuild her face in an 11-and-a-half hour operation.

Sam had to undergo a series of painful procedures after being diagnosed with a rare tumour called odontgenic myxoma.

But she did not find out about the tumour until she had an x-ray at a routine dentist’s appointment in October 2017. It showed a growth that hadn’t been there a year ago.

A biopsy confirmed in December 2017 that Sam had a tumour which needed to be removed – it had destroyed the left side of her jaw bone and teeth. 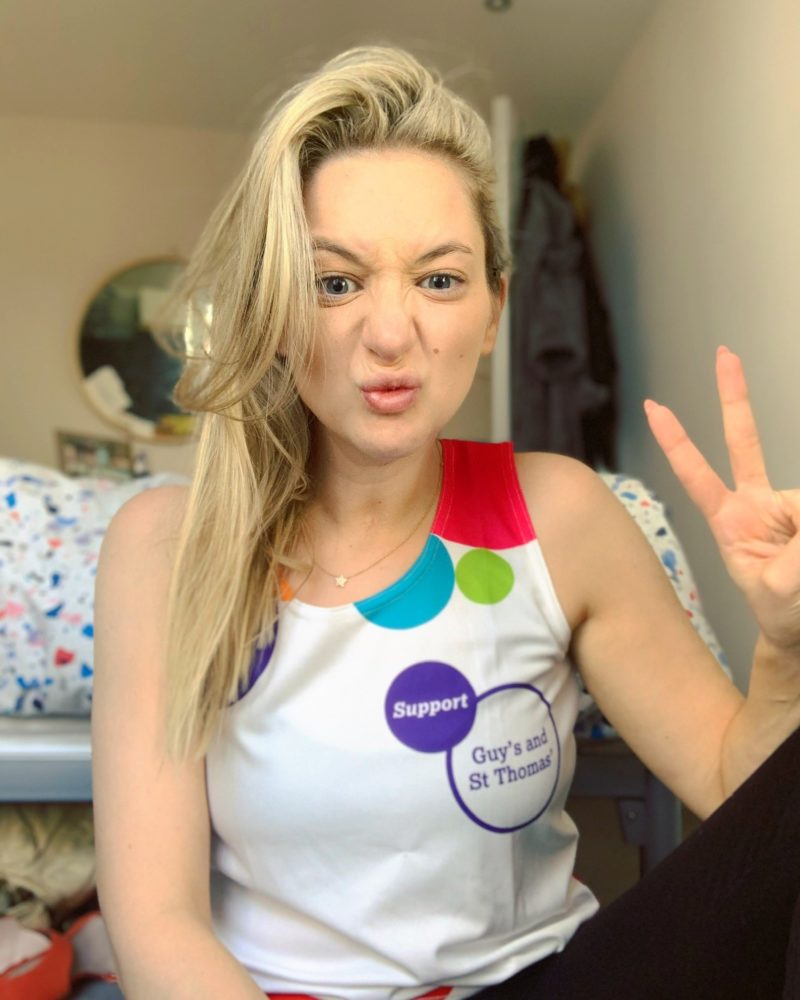 Sam had major surgery on 5 February 2018 to remove the jaw bone and five teeth, and wire her jaw shut.

She said: “I remember being really anxious before my first operation because when I woke up I wouldn’t be able to speak. That was a real mind boggle because I talk a lot!

“With the wires on your jaw it is really difficult. You have to write things down, it is really hard to speak and you can’t brush your teeth.”

On 8 March 2018 Sam had a second operation to have her wires removed – but surgeons then discovered they would have to take out more of the jaw and another tooth a month later.

But her worst ordeal was yet to come. During the 11-and-a-half hour marathon June 2018 procedure, bone was cut from her hip and used to rebuild her jaw along with a metal plate. She also had muscles taken from her stomach to replace part of the gum. Doctors had to make a model of her hip and jaw to plan the surgery.

Sam said: “The surgeons explained everything that was going to happen to my parents and me 10 days before. For about a week beforehand I stopped sleeping, I lost my appetite.

“I was petrified because I’d never known anyone to have surgery that long. I knew when I came out I was going to look really different.

“I don’t remember anything from the Monday operation until the following Saturday – so I lost six days. I’ve seen photos of what I looked like but I’m thankful I don’t remember it.

“After that I had to learn to walk again. I’m quite proud of myself that I went from wheelchair to a zimmer frame to crutches and I was insistent that I walked out of the hospital unaided.”

Sam had a final operation in May 2019 to remove the metal plate that held her face in place along the jawline. She said: “I’ve got it at home in a jar! It’s like a badge of honour.”

Consultant oral maxillofacial surgeon Luke Cascarini operated on Sam. He said: “We are incredibly grateful that Sam wants to support Guy’s and St Thomas’ in this way. Her positive attitude shone through during everything that she went through so I know the trek will be another challenge she’s determined to conquer.

“It’s certainly one way for Sam to test out her new jaw and hip!”

Sam is now on the trek after flying out to China on October 4. She said: “This is something I’ve always wanted to do but I actually decided to do it when I was in the hospital after my enormous surgery. Before I’d never had the courage or a reason to do it.

“I’m so excited. I’ve got a real new lease of life since I was ill. I was not particularly fit or active before but this really gave me that opportunity to take care of myself and I have been ever since.

“A lot of people say when you start your life again it’s usually when you’re much older and you’ve already lived a life. I am blessed to be able to take this opportunity and start a new life for myself in my thirties.”