Millwall players told each other some home truths after last weekend’s derby loss at Brentford – and Tom Elliott reckons that is exactly how it should be.

The Lions face a stiff test in ending their wait for an away victory when they head to second-placed Norwich City tomorrow. Just two Championship points have been banked away from The Den in the current campaign.

“If the boys are upset then they’re going to tell each other how they feel,” said Elliott. “We’re a family at the end of the day – I’m sure you’d do the same with a brother or sister.

“We came in for training on Monday and we are all still friends and team-mates. We have got that cohesion.

“We aired it on Saturday and on the Monday the boys were joking about what they said. It’s not malicious – just frustration.

“You have got 18 players in the dressing room and you’re all upset because you have lost a game. Even after a win you’re going to be ecstatic and then be laughing about what you said when you come back into training.

“It is just normal in football. If you can’t have those kinds of discussions then you are not going to be the greatest team. You need morale and chemistry. If people are shouting and screaming it is because we care and are passionate. This is one of the most passionate clubs in England.

“It is good to get your opinion out and not hold it inside. You are going to feel better about yourself afterwards.

“We got 10 points from a possible 15 before Saturday. You put it down as a bad day at the office, nothing went well for us. You’ve got to say as well that they were a really good team. They had done their research and we didn’t adapt effectively to the way they were pressing us.

“We started the game alright. We had to impose our game on them but because they are a footballing side we needed to play a bit more football ourselves and we didn’t get the balance right.

“We know that wasn’t us. It wasn’t our identity and how we play. That game isn’t going to define us a a team. We will move on from that quickly. Norwich is a massive game. We’ll show them who Millwall are and how we play.”

The Canaries were not widely tipped as promotion contenders before the season commenced in August. 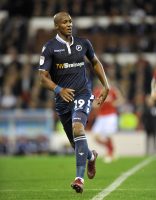 Millwall won 4-0 against them at The Den last season before losing 2-1 at Carrow Road on New Year’s Day, which was the match before Neil Harris’ team chalked up their first away win – a 4-3 thriller at Leeds United.

“They weren’t one of the teams I’d have gone for as the top two but fair play to them – they are doing well,” said Elliott.

“We wouldn’t be playing football if we didn’t want challenges. We’ll be raring to go.

“We’ve got to be a bit tougher away. The Den is our fortress. It just hasn’t clicked away. But it was the same last season – we led at Leeds, went 3-2 down and then won it late.

“I still believe in the team. We will get that away win.

“Because it was Leeds and the history behind that, it gave the boys a buzz. There was relief, it took the pressure off and we went on a crazy run.”

Elliott has started the last six matches. He has played 40 times in the Championship since joining the Lions when his AFC Wimbledon contract ran out.

His first campaign in SE16 saw him largely cast in the role of back-up to Lee Gregory and Steve Morison.

Latterly he has got the nod ahead of the club captain.

There is an element of uncertainty over Elliott’s long term future although Millwall have an option to extend his current terms by a further 12 months until the summer of 2021.

“I’m just focusing day to day,” he said. “Enjoying training and the games. The boys are ledge.

“I’m not stressing about anything. I’m in a good place.

“I’m happy. I’m learning a lot from the gaffer and the boys, Moro and Greggers especially.

“If they [Millwall] wanted me to carry on here then I’ll happily carry on. That’s a discussion for me and the gaffer at a later date.

“I had to grow into League One with Wimbledon and it is the same in the Championship. I’m only going to get stronger.”

Elliott is eligible to play for St Kitts and Nevis.

“They have been talking to me a lot recently. I need to see what it is all about first – the training and where they are going. I’ll give it a little more thought first.”