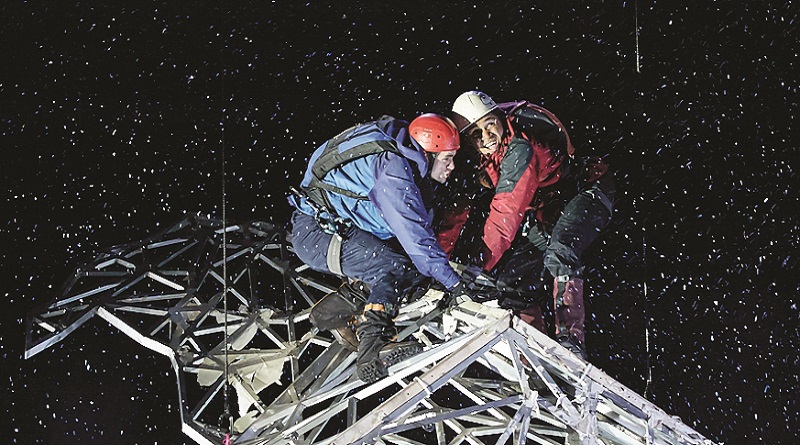 Mountaineer Joe Simpson’s extraordinary story has spawned a book, a film, and now a play. It is a gritty tale of survival in the most extreme conditions.

A hostile terrain at freezing altitudes high up in the Andes.

Not an easy scene to capture in the theatre.

This production, directed by Tom Morris, pulls off some impressive staging of an intriguing narrative.

But the characters are as thin as the air, and its hold on the audience unsteady.

In 1985, Joe Simpson and Simon Yates, a pair of daredevil climbers, decided to try their hand at one of the most challenging peaks in the Peruvian Andes, the Siula Grande.

Although both were highly experienced, they approached this impressive 6,344m climb in a somewhat casual way using “alpine style,” which apparently means very little preparation, or indeed equipment.

Along the way they picked up a “hippy in clown trousers,” Richard Hawking, to manage the base camp. You can see where this is heading.

Having briefly reached the summit, things went disastrously wrong. They ran out of fuel (necessary for warmth and melting snow for drinking water).

Dehydrated and frostbitten, things got worse when Joe fell down an ice shelf, shattering his right leg.

The two then attempted to descend, with Simon lowering Joe in stages on ropes.
As darkness fell, a huge storm began and Simon misjudged the drop. Joe was left hanging in the void.

Unable to communicate, Simon struggled for an hour, supporting Joe’s weight, before he took the difficult decision to cut the rope, leaving him to fall to his death.

But Joe didn’t die, he survived and over several days dragged himself with superhuman effort back to their base camp. An extraordinary achievement.

It’s quite a story. However, it is somewhat blunted dramatically by the knowledge that Joe ultimately made it.

David Grieg’s ambitious dramatisation of Joe’s book tries to trick the audience about this by starting proceedings with his wake in a climbers’ haunt – the Clachaig Inn in the Highlands.

But we’re not taken in. Grieg also introduces a woman into this very masculine story.

The struggling Joe hallucinates about his elder (bullying) sister, Sarah.

This gives Fiona Hampton the opportunity to scream and hit her brother, driving him on to survive with endless swearing.

Grieg also uses the character of Sarah to introduce those of us in the audience who are not experienced climbers to their high energy, daredevil world.

A jukebox at the side of the stage belts out various 1980s anthems.

One of the best moments of the staging is when the hippy Richard (the sweet faced Patrick McNamee) encourages Sarah to start climbing up the side of the stage, over an array of precariously perched chairs and tables.

You wonder nervously how high she can go – a feeling I’m sure shared by the theatre company’s insurers. McNamee’s is the strongest performance – he has a lot of comic lines, and to some extent is the play’s narrator.

The play’s weakest element is the lack of a credible relationship between the two climbers Joe (Josh Williams) and Simon (Angus Yellowlees).

They seem like strangers, although they live in each other’s pockets. They even sleep together in holes dug in the snow.

Simon’s cutting of the rope is not really examined properly.

The same is true of brother and sister – Joe and Sarah. There’s a lot of hitting and swearing, but we don’t get to explore the fact that there must have been a lot of love as well.

Joe’s tale is one that has inspired millions by his courage and endurance. It is worth the telling.

Touching the Void is at The Duke of York’s Theatre until February 29.

2 thoughts on “Theatre Review: Touching the Void, The Duke of York’s Theatre”