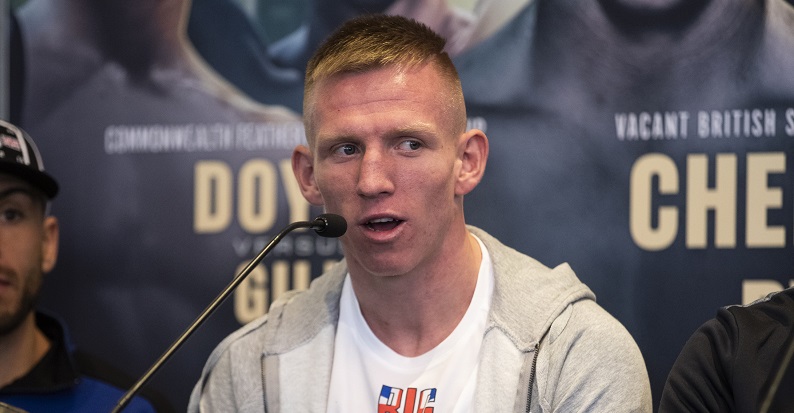 Boxing Sport
11th January 201911th January 2019 Richard Cawley 0 Comments
BY RICHARD CAWLEY
richard@slpmedia.co.uk Ted Cheeseman has a target to hit by the end of 2019 – with his sights set on being at least one of the top-ranked super-welterweights in the world.

And Cheeseman, 23, shows no signs of stopping his fast-track approach to the top.

Spaniard Garcia has a 28-0 fight ledger. Cheeseman is 15-0. The South Londoner fully expects a victory to propel him closer to a world title shot.

“He has got a number three ranking with the WBC and is also ranked by other world governing bodies,” said Cheeseman. “It will put me right in the mix in looking for a world title shot.

“By the end of the year I either want to be waiting for a world title shot, or have had it.

“It’s not unrealistic to think I could be world champion in 2019.

If I win this fight in February, it is very, very realistic. I’ve still got 10 months of the year left and will be ranked number three by the WBC and probably top five in all the governing bodies.”

Cheeseman won the vacant British belt last time out with a wide unanimous decision over Asinia Byfield in October.

“Really and truly at domestic level there ain’t any names there apart from [Anthony] Fowler and massive ones at world level [Kell Brook and Amir Khan] – so it is pointless sticking around,” he said.

“Everyone wants to win the British title outright, but when you turn pro your aim isn’t just to stay at that level. Any successful person wants to become a world champion. So any chance you have to make that opportunity come closer, you have got to take it.”

Cheeseman trained Christmas Day. He said: “If I wasn’t in camp and training for a fight then I might not have trained. But whatever your coach says, that is what you have to do. If he wants me to jump then I ask how high. If I want to go places then these are the sort of things that make champions.

“Some people may say they want to spend that time with their family – but I’ve got that selfishness in me to do what I can to be successful.

“As long as you have got a strongish partner then I think they understand that. You need a family that understand and support what you do. It’s our livelihood. If you look at a footballer, they have got 10 other men around them.

In boxing it is only you and the other person, so you have got to do everything you can.”

Cheeseman and Fowler have traded insults and digs on social media. It’s fairly standard fare – bringing a grudge element into a potential bout that will only heighten expectation and public demand.

Asked if that could follow the Garcia fight, the former Fisher amateur ace said: “The talk was that it might happen after we both have our next ones. But I don’t know what happens. It is all down the managers and promoters.

“I’m one of those fighters that as long as I get paid right, then I’ll fight whoever. That’s why you have a manager – to make these decisions for you.

“I genuinely don’t like him [Fowler]. At the start it was more about just trying to make the fight happen and forcing for it. He took that the wrong way. I didn’t think he was that sort of person. People make out these Olympians are so good. [Vasiliy]

Lomachenko fought for a world title in his second fight. There is all this rubbish that they’ve got to have this test and this test  before they fight someone.”