The great thing about ageing is that, as your looks fade, so does your partner’s eyesight. Photos are normally less forgiving, though.

The beauty of Jim Grover’s book, Windrush – Portrait of a Generation, is that he has shone a light which captures the beauty of each of his subjects and their individual characters.

Photographers can be like drive-by artists. Their pictures mostly capture an instant in time – they depict with absolute accuracy every speck of a vista.

But most cannot encapsulate a before and an after, a transition, a journey. That is what Grover has done. 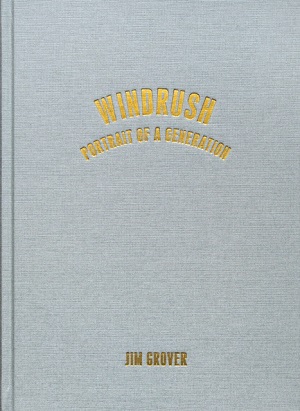 The Afro-Caribbean immigrants depicted tell a portion of their stories, a snippet. But their faces tell so much more, especially when they are posed holding a portrait or snapshot from their distant past, most frequently soon after they arrived here.

Anne Daley, one of the people depicted, speaks quietly but intimately of her tough life, without bitterness – which may be because she has plenty of love in her life: she now has four children, nine grandchildren and four great-grandchildren.

The photographs of Anne also have a nuanced, knowing quality.

Anne said: “My dad was a fisherman, my mother was a fish vendor – they earned enough to feed us and clothe us, a family of six.

“Arthur was a fisherman, too. He came over in 1959 and worked for British Rail in Nine Elms, shunting engines. “But he wasn’t happy so as soon as he came, he sent back for me in 1960.

I didn’t feel we needed a big wedding. No honeymoon… went straight back to work. We rented a single room at 4 Chantry Road in Stockwell – it’s still there – £2, 10 shillings a week.

“I went to the ladies’ labour exchange in Brixton. I could cook and serve, so I got a job in catering. “We had two boys and two girls. I didn’t have no choice – I take care of them until they all grow up. “My husband was too busy…always out.

He wasn’t a family man – he was busy, busy, always out. “After British Rail he went to work for London Transport in the bus garage at Brixton Hill.

He died in 1997. He was 67. “I’ve been going to church since I came in 1960, St John the Divine in Kennington. “Everyone knows Mrs Daley. My children were christened there, confirmed there.

“Men don’t like church. We women keep going to church and keep believing. I love to dance – rock’n’roll, the twist. We’d go to Tiffany’s in the West End. You’d go with all your friends and workmates. We’d all dress up. I dressed up like Shirley Bassey, sequins and everything.

It was difficult times when the younger ones were going to school. Money wasn’t there and I had to make do with what we had. But all my neighbours helped me and they were mostly white.

“Now my great grand-children all come over to Grandma for dinner after school and I feed them before they go to their house. “They don’t like much Jamaican food, but they like rice and peas and chicken… and my chicken soup.”

Her story is like many others, given life and colour in a way which our fast-paced, superficial life can only skim over.

Mr Grover spent time with the people he wanted to depict and has allowed them to become real in a visionary way. This beautiful treasure of a book is like holding precious lives in your hand, lives of struggle but of dignity.

It is almost an emotional experience to open and behold – like a performance by Mahalia Jackson in your living room. It is not just about black families, though. It is also about how we become fully ourselves as our lives unfold.

Ageing is not something to fear, but a time to welcome, because it brings wisdom and strength. You know you are growing old, because you feel bad in the morning, even when you didn’t have fun the previous night. But at least you can have a clear conscience – even if that is only because you have such a bad memory.

To order Windrush – Portrait of a Generation go to www.windrushportrait ofageneration.com/signed-and-personalised-for-you/

Jim will also personalise your book if you wish.