Crabs don’t usually travel by Tube. It’s crowded enough already, even if you are especially good at moving sideways down the ailes.

But if they did, they would be scuttling along to Clapham Common station to commute. Because they play a starring role in the latest campaign by People for the Ethical Treatment of Animals (PETA).

More than 50 posters featuring fish, crabs, lobsters and octopuses are now covering the crowded commuter stop, amid a PETA Tube takeover this month, which is World Vegan Month.

In each ad, a sea animal appears next to the words “I’m ME, Not MEAT. See the Individual. Go Vegan” or “Sea Life, Not Sea Food”.

“PETA’s Tube takeover asks everyone to spare these sensitive animals the agony of being boiled to death, eaten alive, or crushed in fishing nets simply by choosing vegan meals. See animals, not ‘seafood’.”

She obviously understands the, er, scale of the problem but resists the temptation to say it would be shellfish to do anything else. 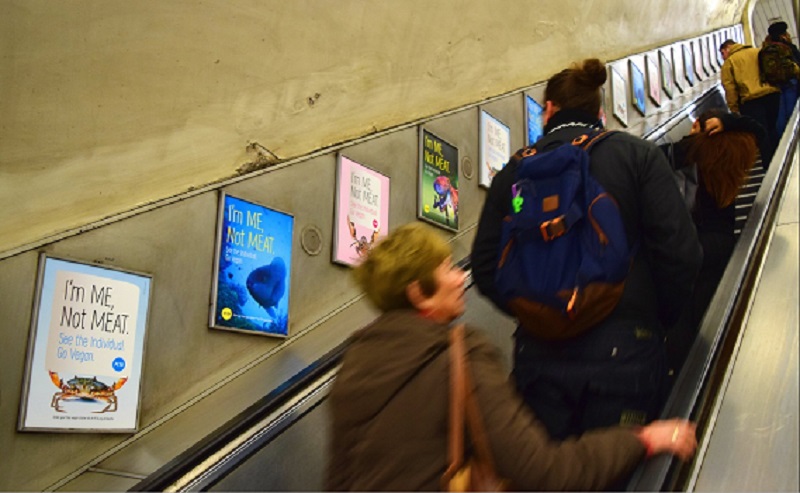 A PETA US investigation of a crustacean abattoir revealed that live lobsters and crabs were impaled, torn apart, and decapitated – even as their legs continued to move.

Chefs typically place live lobsters in pots of boiling water while they’re still conscious – a cruel practice that has been banned in Switzerland – and some cut off live octopuses’ limbs and serve them still writhing to customers.

Fish may slowly suffocate or be crushed to death when they’re dragged out of the ocean in huge nets, and the throats and stomachs of those who survive are cut open on the decks of fishing boats.

PETA – whose motto reads, in part, that “animals are not ours to eat” – notes that plant-based fish alternatives are available in supermarkets and restaurants all over the UK.

PETA has shelled out to offer a free vegan starter kit full of recipes, tips, and more.