George Byers scored the only goal of the game as Millwall slipped to their first away Championship defeat of 2019 at the Liberty Stadium.

His deflected strike found the top corner just before half-time and despite an improved second-half display, Neil Harris’ side left South Wales with nothing.

It means that the Lions’ 3-2 victory over Everton a fortnight ago is their only victory in any competition since New Year’s Day and they are just four points above the relegation zone ahead of Tuesday’s meeting with Sheffield Wednesday at The Den.

Swansea made all the early inroads and came close to breaking the deadlock inside the opening minutes, but Byers’ powerful effort from 20-yards was palmed away by Jordan Archer. 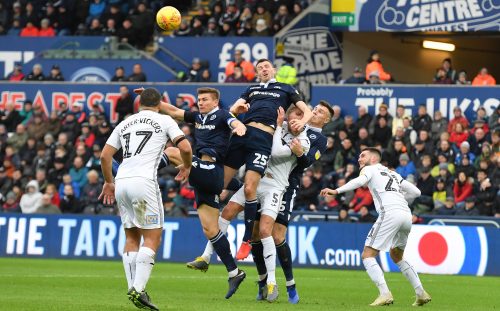 The visitors responded up the other end, but after a wonderful solo run, Ben Thompson’s left-footed strike was deflected, and Erwin Mulder easily claimed.

Despite that chance, it was the Swans that always looked the most likely to score. Mike van der Hoorn was next to try his luck, but the Dutchman could only head wide from Matt Grimes’ corner.

Swansea came even closer to opening the scoring just past the half-hour mark. Grimes was brought down around 25 yards out, picked himself up and produced a delightful curling effort towards the top left-hand corner – Archer flinging himself across to make a fantastic stop.

But only two minutes before the interval, the home side’s pressure finally paid off. A corner from the right found its way to Byers and he fired into the top corner from just inside the box after his initial effort had been blocked. 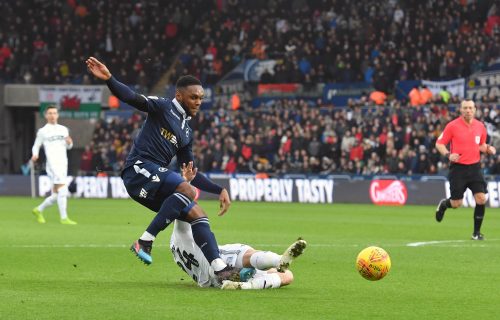 Shane Ferguson was introduced in place of Murray Wallace at the break and the Northern Ireland international almost had an immediate impact. His cross from the left found Mahlon Romeo at the far post, but his rasping effort was saved down to his left by Mulder.

Millwall continued to pile on the pressure – this time Jed Wallace forced the Swansea shot-stopper into an acrobatic save from his well-struck volley.

But despite all of the Lions’ pressure, the Welsh side should – and could – have extended their lead.

Firstly, substitute Oli McBurnie – who netted the winner at The Den in September – headed narrowly wide and then Shane Ferguson cleared off the line from Bersant Celina after a neat one-two between him and Wayne Routledge.

Harris’ men had a golden opportunity to level deep into stoppage-time, but Jake Cooper couldn’t apply the finishing touch after Ferguson’s corner was flicked on by Shaun Hutchinson – and they left the Liberty Stadium with more frustration away from home.