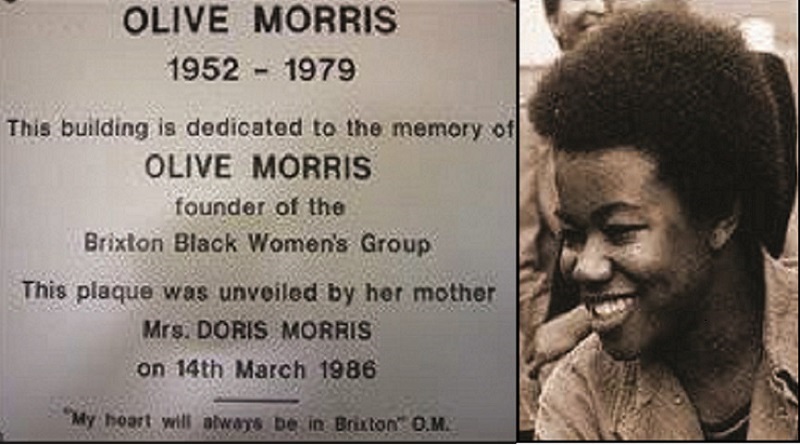 Olive Morris was a pioneer female campaigner at a time long before #MeToo and #BlackLivesMatter, when she was pushing against the tide.

She is still remembered as a fighter by many in Brixton.

Friend Beverley Bryan said: “Olive and I went to the same school. Even then she had that streak in her – in school, they would have called it rebelliousness or disruptiveness, but it was really a fearlessness about challenging injustice at whatever level.

“This made others very weary of her, she was so obviously a fighter. I saw her once confronting a policeman – it might have been when she was evicted.

She went at him like a whirlwind and cussed him to heaven. And this policeman looked really taken aback, he didn’t know how to deal with someone who had no fear of him.

He was meant to represent the big arm of the law. But because she was angry and she knew he was in the wrong, she didn’t hesitate.

“She would take anybody on like that, even people in organisations if she thought that someone needed to expose their hypocrisy for mounting slogans and living a lie.

Because of that, a lot of them saw her as a pain in the neck, and she was, too.“She’d fight them physically, if it was necessary.

If you moved with Olive, you couldn’t be a weak heart. She gave a lot of support to so many sisters though, when they came under pressure from the brothers at meetings.

That fearlessness of hers, and that genuine commitment she showed to the work she did made her stand out, made her special.”

“The reason for this is very simple. When we began designing the currency back in 2009 we asked lots of people from Brixton who they thought should go on the notes.

We had a stall at the Lambeth Country Show and on online voting poll. Olive’s name kept coming up.

“She was a brilliant choice to be the first person to go on a Brixton Pound. She was an activist – campaigning on many social justice issues including racism, unemployment, police violence and squatters’ rights.

She was also a member of the British Black Panthers and a socialist and she supported anti-colonial struggles internationally.

“Money and power are at the heart of many of the issues that Olive campaigned on. Just take a look at our national currency.

If you go to the British Museum you can also see notes issued by the British Government in the British colonies and they look very similar to the notes that we still use today.

“The Brixton Pound deliberately chose images and symbols that break tradition with this colonialist past.

Olive Morris was a disrupter and we are proud to put her image on the first issue of the notes in the place that is usually reserved for the Queen.

We hope this may encourage more people to look at the inequalities sustained and perpetuated by our current financial system and challenge them, just as Olive Morris did.

“We hope that, alongside organisations like the Remembering Olive Collective, we can help keep her legacy alive.”