BY PETER SKUSE, THE CLAPHAM SOCIETY

Parsons Corner is is the name of the right angle turn where Clapham Park Road turns towards Brixton, at the bottom of the hill from St Mary’s Church, where both Park Hill and Abbeville Road take the other 90° aspect of this crossroads.

The large traffic island was not constructed until the early 1950s: before that there was a single Keep Left small pedestrian refuge somewhere in the middle of a dusty road surface.

And the large sign reading Parsons Corner is still a prominent part of this road junction.

This was the name of the family that ran the large stationers and newspaper /confectionery/tobacconist on the section of the corner between Park Hill and the Clock House Inn. 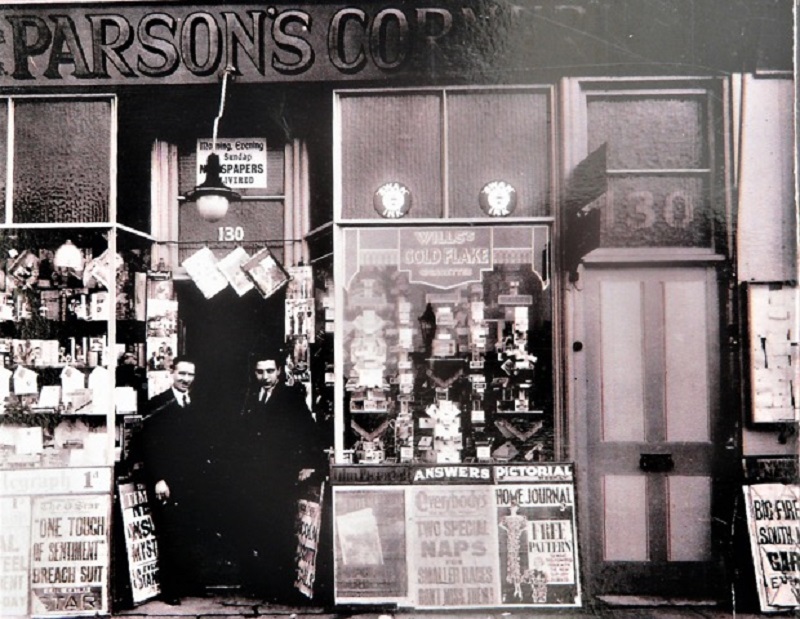 The name over the double-fronted shop had sported an unwarranted apostrophe from the start; corrected when Joyce’s dad took over the front open space of the white building near the bus stop.

This happened soon after one Sunday in September 1940 when the family was bombed out in one of the first bombing raids of the war.

The owners had patronised the Parsons shop and permitted the quick construction of a kiosk so that the family could continue making a living, as part of the war effort.

Indeed, on the day after the annihilation of the original double-fronted shop, Joyce’s dad set up a trestle table on the footway close to the bus stop, and continued in the newspaper trade in the open air until the kiosk was built and stocked.

When the large white building [110-112 Clapham Park Road] behind the kiosk came up for sale, it was seen to be inappropriate for a large stationery, newsagent and tobacconist.

So an enlarged kiosk became the main business premises.

It was her dad’s idea, on taking over the original shop, to call his double-fronted stationers and newsagent Parsons Corner; and the name continued after the shop was demolished in the war, and was made abundantly clear to all when Mr Parsons had made the large lettering that still adorns the property. 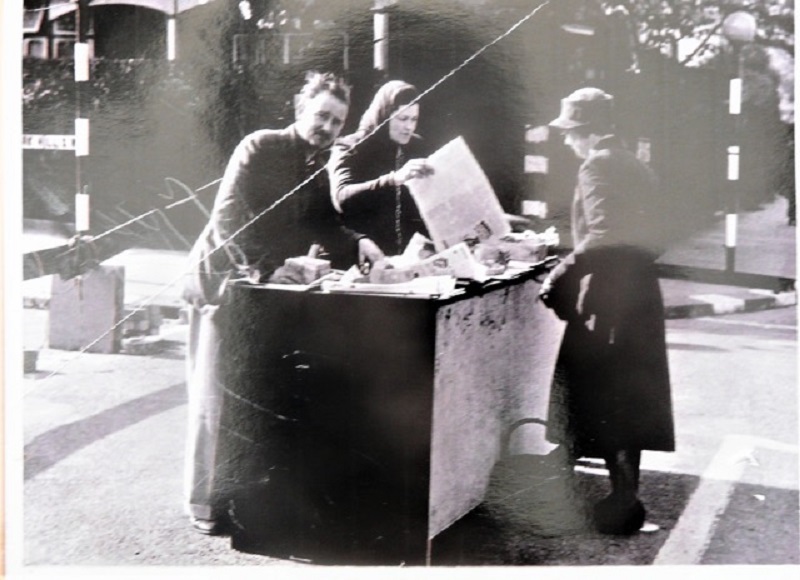 Pretty much every local person was happy to adopt the name, the bus stop on each side of the road took the name, and only when Transport for London (TfL) took over the management was there a move to naming stops after roads.

Thus Park Hill, likely decided by an individual or small committee, was chosen with no reference to the length of the road (Abbeville Road might have been a better choice).

Other bus stops continue to this day after the pub or inn or church or established site name, and with Parsons Corner (the family surname is Parsons, with that ‘s’ on the end) so clearly and visibly still a commanding presence, there seems to be no value in having renamed the bus stop.

Keeping – or restoring – the name of the family which has had a living presence on that very corner for approaching a century would seem to be worth considering. How about it, TfL?

At the same time that the Parsons shop was hit, so was St James Church in Park Hill.

A couple who lived nearby had taken shelter in their concrete cellar when the air-raid sirens had sounded that Sunday in 1940.

At the moment of sounding, Joyce Parsons had pushed her young brother in a pram from the shop, and was collecting ‘silver paper’ (aluminium foil) for the war effort’s salvage projects.

Mrs Parsons had told her children that if ever the sirens sounded, and they were out somewhere, they must run home immediately, and although invited to shelter there by the couple in the house at Park Hill which they were visiting, Joyce, aged nine, turned the pram round and ran back down Park Hill with her brother.

She met her mum running up to get them, and they returned safely to their own shelter to the rear of the shop.

The shop was bombed, but Joyce’s dad had stayed there, and had saved himself by sheltering beneath a counter of thick wood; he was soon found unharmed by the rescuers who everywhere risked their own safety by manhandling rubble to find people buried in the debris. 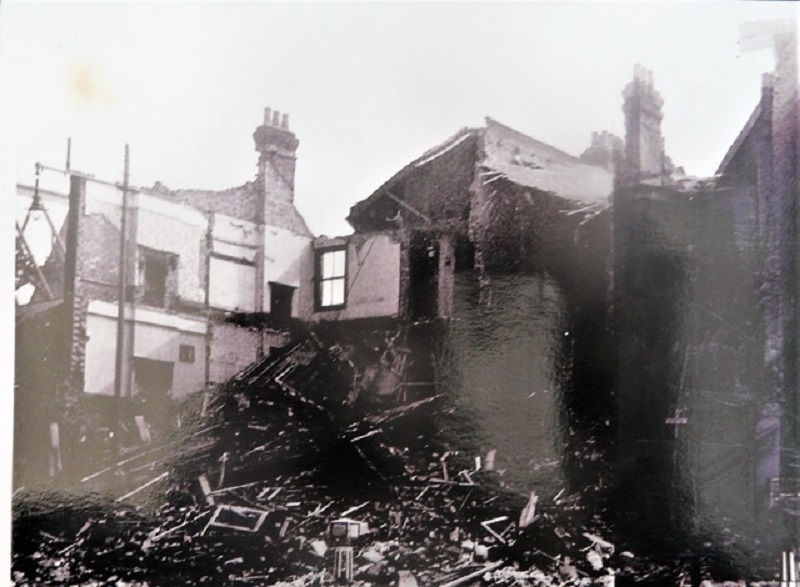 In the same raid, the string of bombs that destroyed the Parsons shop also reduced St James Church to rubble.

Joyce, her brother Simon and her mum survived without injury, as they had had time to shelter, but the couple in Park Hill who had offered Joyce shelter were in a safer and more robust shelter, but it was unfortunately engulfed by water inflow from ruptured mains, and with rubble atop the shelter they could not escape.

They were drowned and must have died soon after the bombs exploded. Soon after this, Joyce and Russel were evacuated to Devon, where they stayed until the lack of air raids encouraged their mother to get her children back again; when doodlebugs began and bombing resumed in earnest, Joyce this time was evacuated northwards to Gatley, near Cheadle in Cheshire.

Because of these travels, she went from Haselrigge School and ended at Bonneville School, but attended rather more schools than the average child of her time, and as she said “teachers during the war were a bit hard to get.”

Joyce still lives comfortably at Parsons Corner, though very few of her old customers are still around these days. It was by pure chance that I walked past on my way to a Clapham Society event, and with a half hour to spare I decided to ring the doorbell, just to see what had happened to close the kiosk, and the barber’s salon that let customers look out of the front room window . . . local history, eh?

By good fortune Joyce was at home and was still living there after my last contact as a customer at the kiosk in 1961.

For information about the Clapham Society and more historical articles go to www.claphamsociety.com