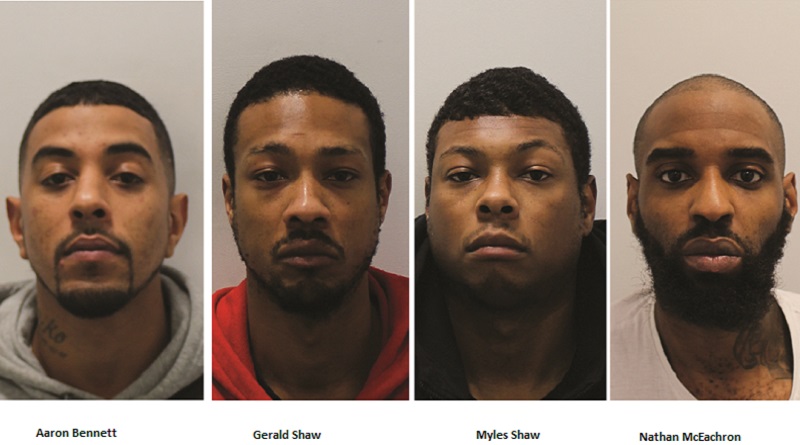 Four members of a gang who were involved in money laundering and selling drugs have been jailed after cops raided their houses to find more than £35,000 worth of drugs and cash.

Police found more than £20,000 hidden in an armchair, a laundry basket and pairs of socks at a residential address in Salem Place, Croydon.

Gerald Shaw, 29, of Elborough Road, South Norwood pleaded guilty to two counts of possession with intent to supply class A drugs and cannabis.

The gang were jailed for a total of more than nine years. All four submitted guilty pleas prior to a trial.
In May 2018, police executed a drugs warrant at the Shaws’ address.

The pair, who are brothers, were present as officers discovered a cannabis factory with a number of plants estimated to be worth around £10,000 in street value.

Officers also found a large quantity of class A drugs, more than £2,000 in cash as well as mobile phones and scales.

Bennett was arrested after police discovered him with a large quantity of herbal cannabis, and cops took £1,200 in cash from his home.

Another police raid at an address linked to MacEachron, in Birchanger Road, South Norwood, in June 2018, recovered a large quantity of skunk cannabis, more than £1,800 in cash, digital scales and drugs packaging.

A further warrant in December 2018 at the address in Elborough Road recovered more than £500 in cash and a quantity of skunk cannabis.

Detective Sergeant Damian Hill, from Specialist Crime, said: “I am very pleased with this result. The gang have benefited considerably from their criminality and, like many others in their position, assumed impunity.

“I hope this sends a message to other drug dealers, that you never know when police are waiting to bring an end to your enterprise.

“Drug dealing and the associated criminality brings misery to the lives of many Londoners.”