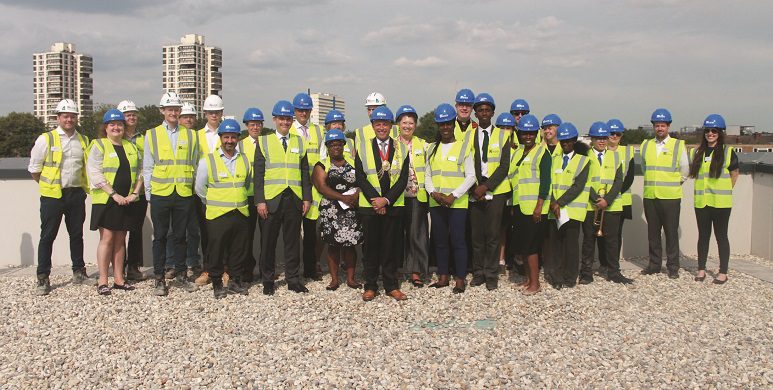 Lambeth’s newest school building is in its final stages of completion as Saint Gabriel’s College (SGC) held a topping out ceremony on Thursday, June 28.

The last paving on the roof was laid by the Mayor of Lambeth, Councillor Christopher Wellbelove.

Father Mark Williams, Vicar of St John the Divine Kennington and vice chairman of governors performed a ceremony to bless the building, followed by poetry readings by the head boy and girl.

In topping out the building the mayor said “I’m delighted to mark this significant milestone in the completion of Saint Gabriel’s College, for the benefit of Lambeth’s children.

I look forward to visiting again once the school is in occupation to see the excellent facilities here in full use.”

Other guests included past and present SGC governors, staff, and contractors Kier, as well as the Education and Skills Funding Agency.

A new school building for Saint Gabriel’s College has been in planning for over eight years. The project got the go- ahead in April 2015.

Construction began in September 2016 and the building is expected to be completed for the school to move into later this year.

During construction the school has been mainly housed on its Cormont Road site in Camberwell.

Mr Butler said: “We’re very pleased to welcome the Mayor and other guests to our topping out ceremony.

We’re excited about our superb new building and the opportunities it will give us to provide excellent education and personal development to present and future students from our community.”