Krystian Bielik has had some lovely afternoons at The Valley. Saturday was not one of them. Blame Charlton. Blame Lee Bowyer’s rhythm-upsetting side.

Bielik was a Poland powerhouse in the Addicks’ midfield last season as they won League One promotion.

But there might have been a little bit of relief for the former Arsenal man when his number came up on the substitutes board on the hour mark at the weekend. 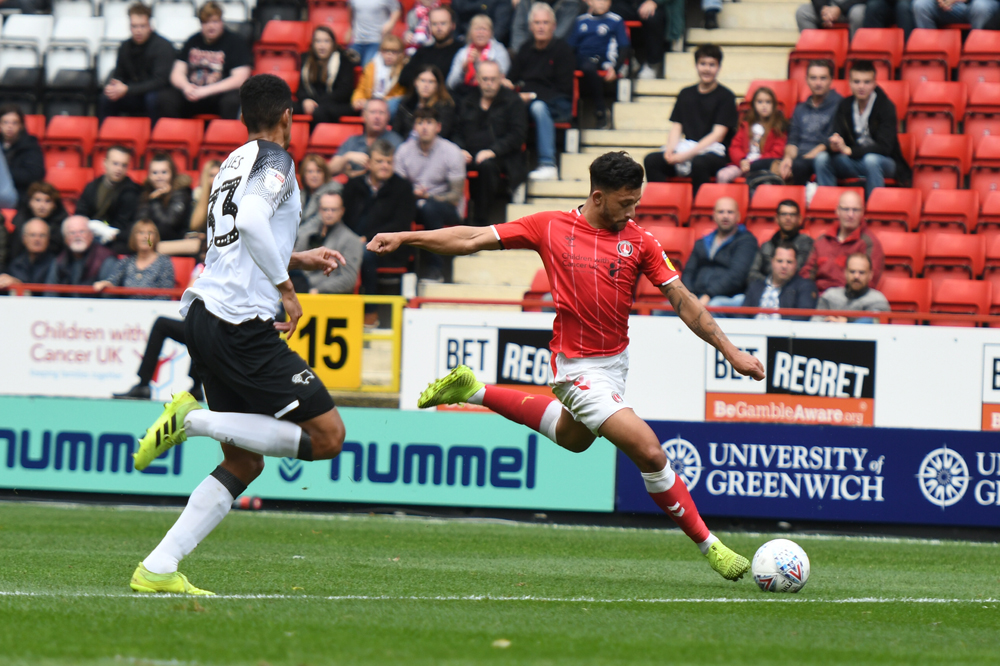 Bielik had been harrassed and outhustled by an Addicks team who don’t know the meaning of taking a breather.

His former team-mates Josh Cullen and Darren Pratley showed a complete lack of sentiment for his SE7 return. Conor Gallagher proved to be every bit as spikily tenacious.

It wasn’t just Bielik who wasn’t afforded time and space. Charlton hunted in a pack. Derby seemed shocked by their hosts’ intensity and press. 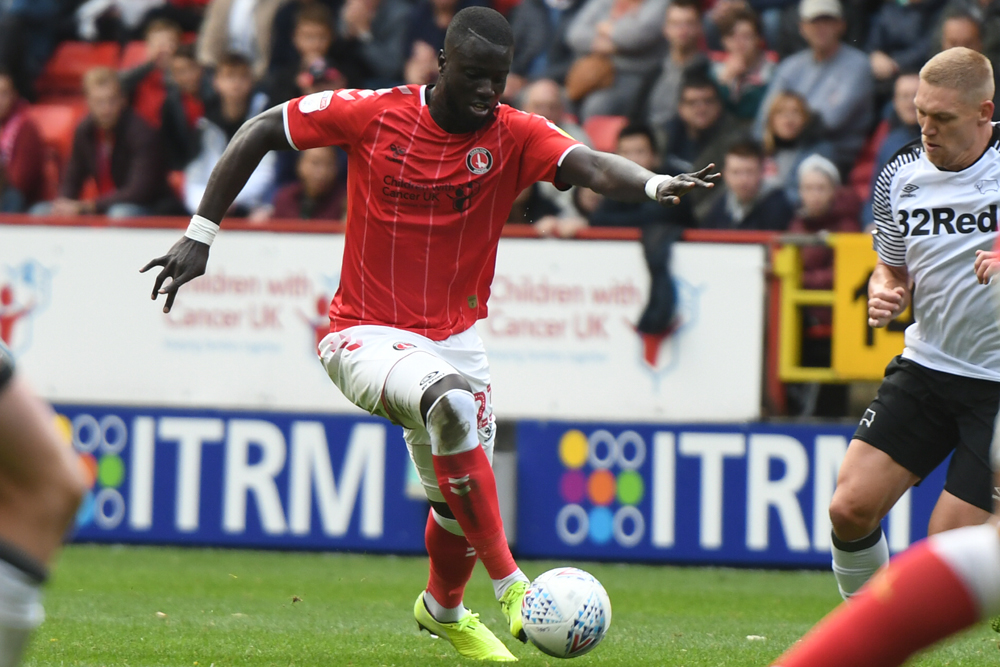 Any appetite for battle was quickly lost. A few more insipid displays like this and Phillip Cocu could be under serious pressure.

Charlton under Lee Bowyer are the making of footballers. Bielik’s performances for the Addicks last season were absolutely huge in him making a £10million transfer to Derby this summer.

The process continues, even if the names change.

How much has Gallagher kicked on since making the temporary move to SE7? Loads. How much has Tom Lockyer answered questions about his height and whether he could hack it at this level? Plenty.

Bowyer and his management team – criminally only under contract until June – keep finding the answers. They keep making players better and there are no doubts they are competitive at this level despite working with a fraction of the finances of many clubs at this level. 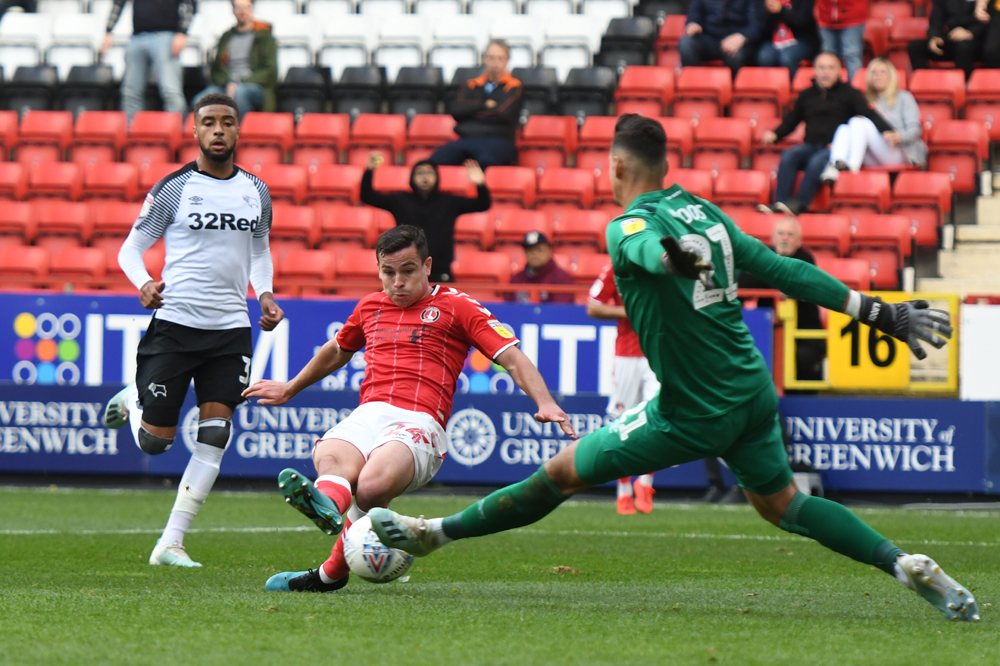 The fear is that someone else will appreciate their work far more than Charlton owner Roland Duchatelet. There are no guarantees in football – you can get an offer which is too good to turn down – but making people feel valued is important in any walk of life.

Bowyer gets adoration and respect but it comes from the fans, not the Belgian tycoon who pays the bills but doesn’t invest even a scrap of genuine love or passion into the club.

Any new owner would be able to instantly send their popularity skyrocketing by putting Bowyer and his backroom staff on longer-term deals. The icing on the cake would be securing Lyle Taylor on new terms. The word is that Brentford will come back with a fresh attempt to land the club’s pink-haired top goalscorer in January.

Charlton have been without star man Taylor since the end of August and also had no recognised left-sided defender at the weekend – once again forcing a formation change – as Ben Purrington was also ruled out.

That injury list was added to when Jonny Williams, whose movement had caused Derby plenty of problems, as well as providing the opening goal for Macauley Bonne for his fifth assist of the campaign, came off with a knee injury in the 31st minute.

Selection issues. But by 5pm on Saturday the Addicks were seventh in the table and just four points behind Championship leaders West Bromwich Albion, who they head to after tomorrow’s trip to Bristol City. 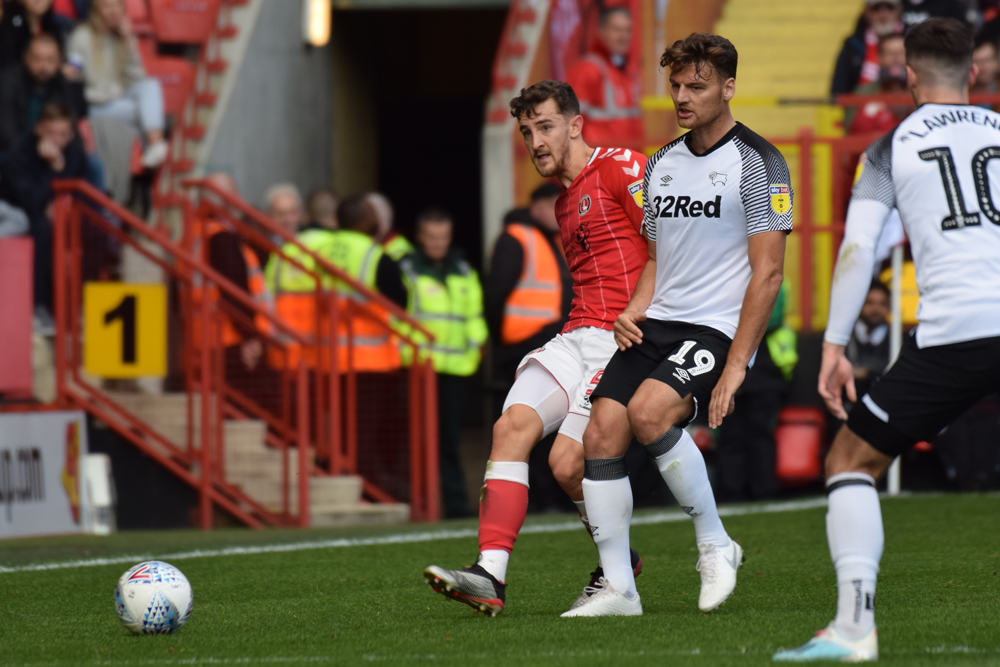 Charlton had only 38 per cent possession and completed 200 passes less than the Rams, but that only serves to underline how statistics can be deceptive.

This truly was a comfortable victory for the Addicks.

It never looked in doubt from the moment Bonne put them ahead with his third goal in five starts.

Naby Sarr’s ball sent Williams careering down the left and his cross was crashed first time past Kelle Roos with six minutes on the clock.

Derby’s defending for the second was woeful –  Josh Cullen’s corner kick headed home by Sarr, who had peeled off to the back post.

The game was up when Gallagher produced a brilliant effort over Kelle Roos. It was the cue for some in the away end to make an early start on their journey home. 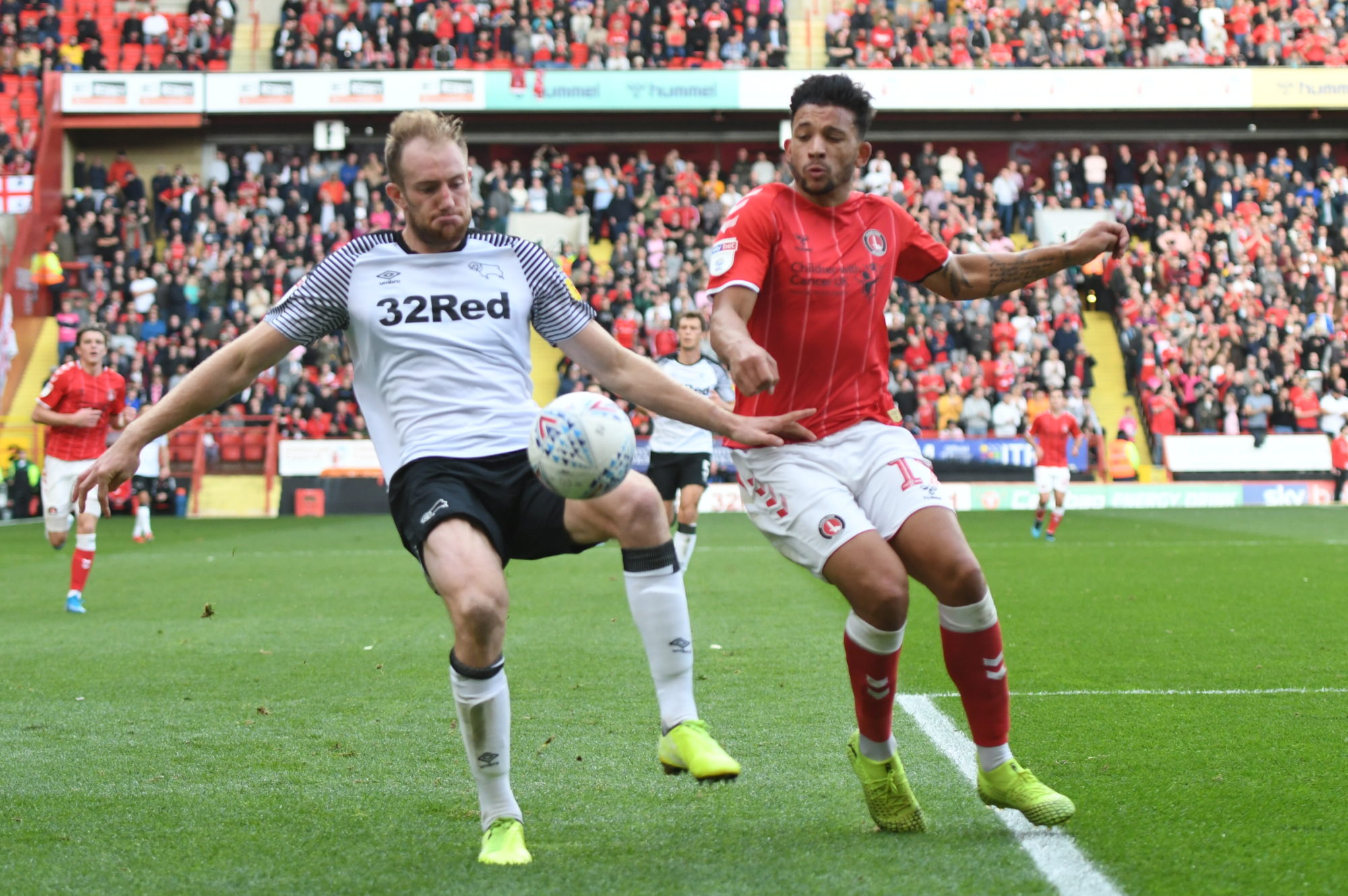 The Chelsea loanee is going to be a star. He looked class from the very start of the campaign and little since has served to dispel that notion.

His recent call-up to the England U21 set-up would not have happened if he hadn’t delivered big style in SE7.

Happy to do the ugly side of the game, his technical ability is not in question considering he is at one of the Premier League’s biggest clubs – and boy can he finish.

His other goals this season have seen him make late penalty box incursions to finish sweetly. This time he showed that he can also strike sublimely from distance.

Cullen was Cullen – busy and knitting everything together in midfield. Another loanee to impress was Sam Field, although Charlton lacked a little bit of movement in the final third after Williams was forced off the West Brom midfielder played very well. 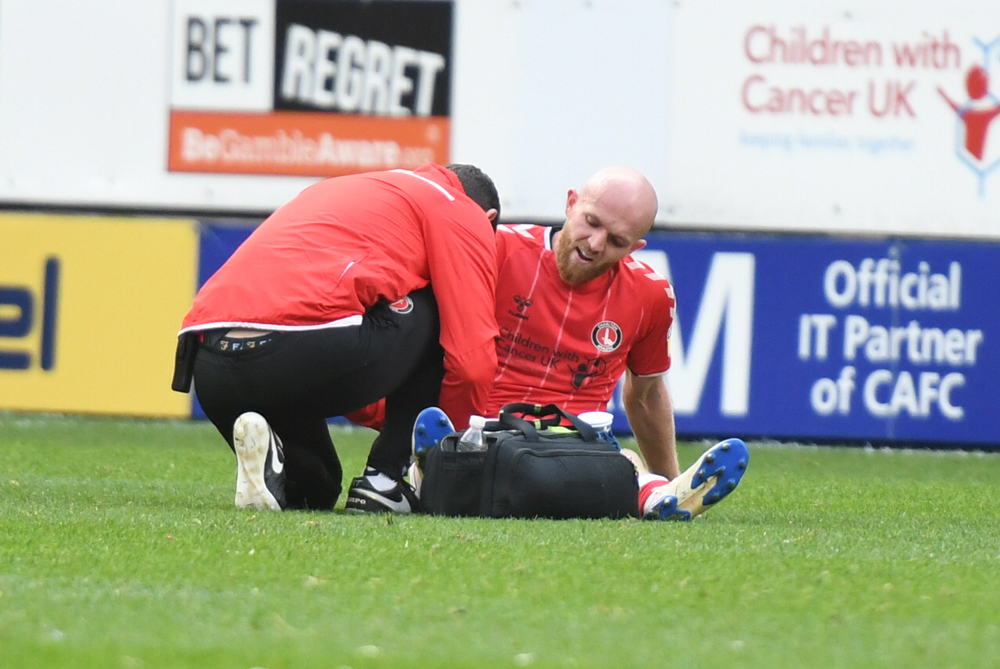 Darren Pratley was solid as he played in the back three. Another feature of Bowyer’s team is for players to be able to do a more than capable job away from their perceived natural position. Jake Forster-Caskey has filled in pretty adeptly at left wing-back in the last two matches.

Charlton have kept 15 clean sheets in 2019 and Dillon Phillips had only one moment of concern, racing off his line to frustrate Mason Bennett in the 86th minute.

This Addicks side is one that underlines the group are stronger than individuals.

When Sarr lost the ball as he stepped out of defence, it was Jonathan Leko who tracked back and dispossessed Jayden Bogle as Derby had a counter. You could highlight other moments like that time and time again. 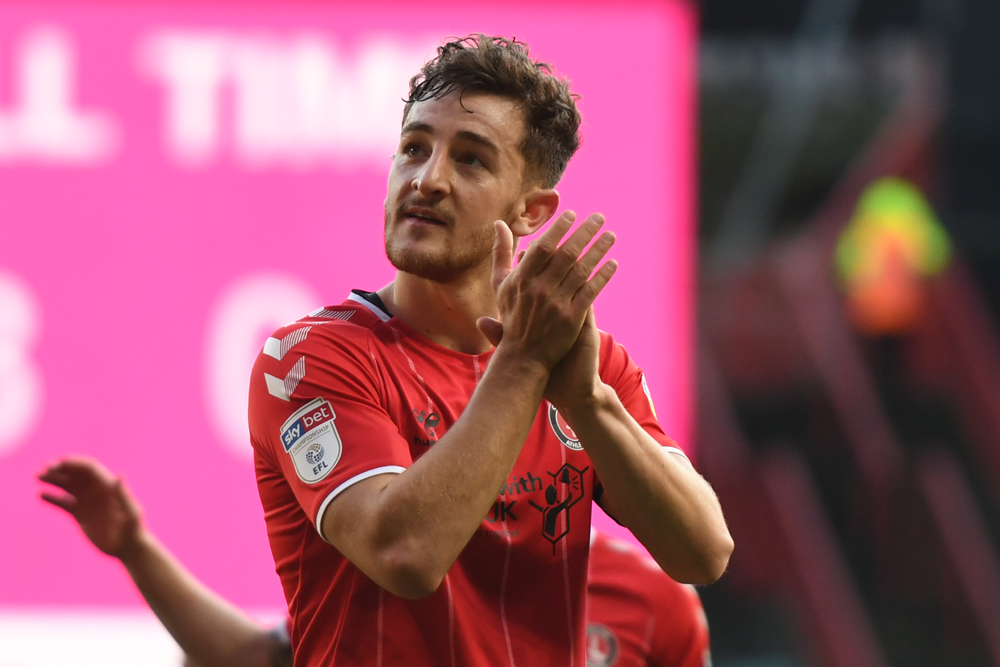 Just when a Rams player thought they had a yard of space, they were swarmed.

Hard work beats talent, when talent doesn’t work hard. But this Charlton side have plenty of talent as well.

This was only their second win over the Rams in the last 12 meetings of the two clubs – drawing three and losing seven.

Derby had lost just three of their past 23 regular league matches and saw a five-game unbeaten run ended. It’s to Charlton’s credit that they made Cocu’s team look extremely poor.