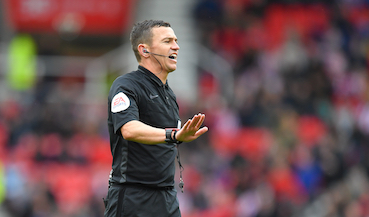 Tony Harrington will referee Millwall’s home game against Bolton on Saturday – and he has history with the Lions.

He was the official who sent off Jed Wallace for a foul on Burton’s Tom Flanagan on the halfway line.

Millwall were raging at the decision and lodged an appeal with the FA, who upheld the winger’s three-game ban.

The Lions issued a statement at the time which said: “The club’s view is that The PGMOL should be involved in The FA’s appeal process which, as it stands, appears archaic.

“This incident highlights how a lack of appropriate communication has led to a decision which goes completely against the views of several other professionals, including the referees’ own governing body.”

Harris told the South London Press today: “I should know better than anybody – with the amount of time I’ve been at the club – that we don’t get referees who favour us.

“It is what it is. Tony is a very good referee. We just get on with it and worry about ourselves and not things we can’t control like tight decisions or red card decisions. We’ll focus on ourselves and trying to get three points.”