Boxing Sport
11th September 20199th September 2019 Richard Cawley 0 Comments
BY RICHARD CAWLEY
richard@slpmedia.co.uk Ultimate Boxxer III victor Derrick Osaze is due to box on September 20 – and is set for a six-rounder so that he can be eligible for title fights.

The 25-year-old boxed three times in one night in May as he banked £50,000 after winning the middleweight tournament.

But that competition saw the bouts take place over three rounds because of the knockout format on the night.

“The reason I am doing six three minutes rounds is so that I can start pushing for titles,” said the Peckham-born fighter. “The aim is to be in the mix for some belts.

“But I haven’t got a six-rounder on my record so I am not able to box a 10-rounder.

“The plan is to either have another six-rounder or an eight-rounder after this next one.

“It is standard by the British Boxing Board of Control to demand that you have boxed more rounds [to fight for a title]. Funnily enough we were trying to get a six or eight-rounder before Ultimate Boxxer but due to a change of opponent it didn’t materialise. 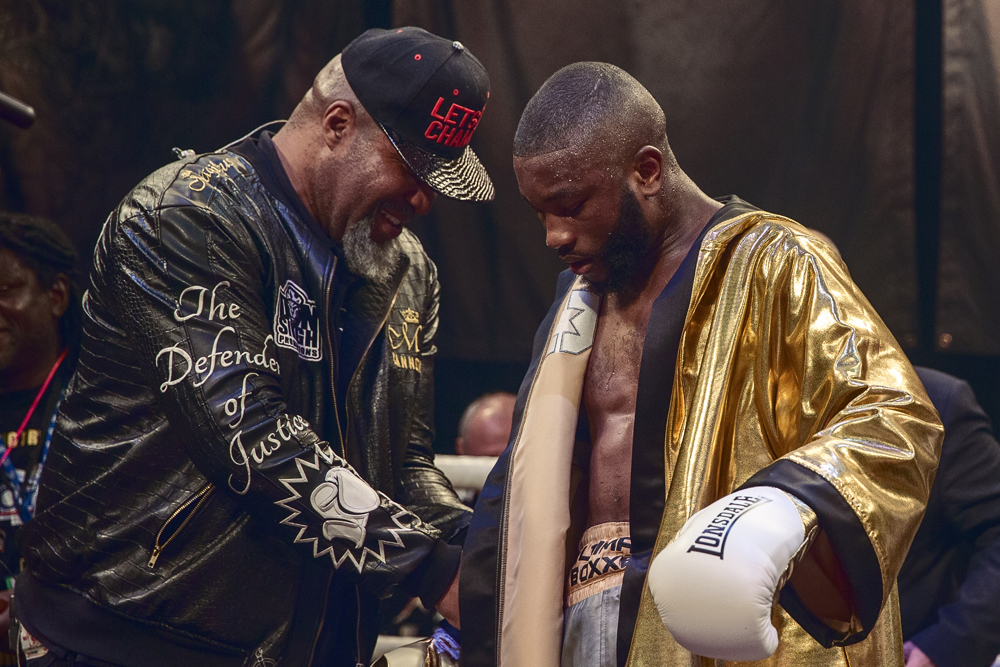 “I guess it was a blessing in disguise, due to the format of the competition I went on to win.”

Osaze will be on the undercard of Ultimate Boxxer V at the O2 Arena’s Indigo. This time it is super-welterweights going head to head for the prize.

The South Londoner’s success in the summer has not led to a promotional deal.

“My manager is probably working on that,” he said. “It is a funny time in boxing. Some big promoters don’t want to commit to signing anybody and instead are happy for them to be on shows here and there.

“But with how big their stables are and the TV contracts, promoters are happy to work on a fight-by-fight basis.

“It is not as straightforward now. When you won Prizefighter [a competition that used to work like Ultimate Boxxer] you had a guaranteed contract.

“I’m still a free agent. I need to just keep moving forward and an opportunity will come my way.”

Matchroom Boxing promoter Eddie Hearn signed him on a promotional deal after that.

“Without going in Ultimate Boxxer I don’t think that opportunity would have come for Conway,” said Osaze. “For some people an opportunity falls in their lap because of outside things.

“Everything happens for a reason. He did really well against Ted Cheeseman.

“Everyone is on their own different journey. I’ll keep my head down and keep getting wins.”

Osaze, now based in Nottingham, had to pass up the chance to represent Nigeria at the 2016 Rio Olympics as he concentrated on finishing a degree.

His Ultimate Boxxer success is definitely his standout moment in the ring.

“There was never a doubt,” he said. “Myself and my coach were extremely confident. In every interview and article that came out we never said anything other than: ‘Yes, we are going there to win’.

“We felt we had nothing to lose. If you go and win – great. The worst-case scenario is that you have lost over three rounds. That doesn’t dictate anything.

“Keeping that undefeated record is a new thing, because of Floyd Mayweather managing it. But if you look at all the greatest fighters, they have all lost fights. Boxers shouldn’t be scared to lose their ‘0’.

“Having an ‘0’ means nothing. You could be 50-0, have fought nobody and got nowhere.

“That’s why there was everything to gain from going into it.”