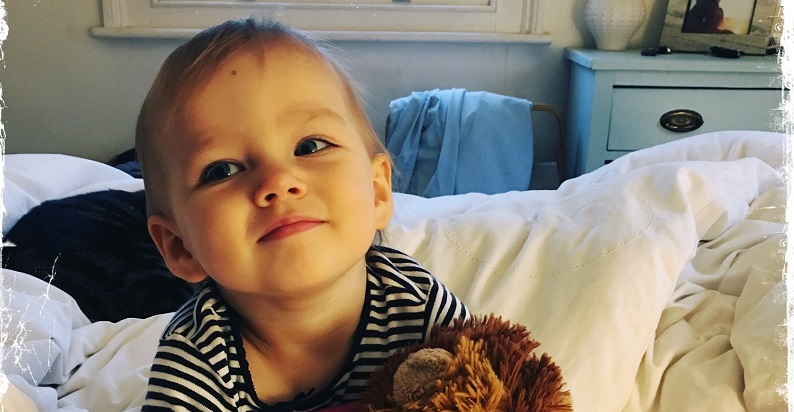 The parents of a two-year-old tot have made an empassioned appeal for donations to help save her life.

Time is running out for Esme Handley – or Esme Lion Heart, as she is now known to medics.

The two-and-a-half-year-old’s parents Will and Rebecca need to raise half a million pounds for an urgent stem cell transplant to save her life.

The family have launched a desperate GoFundMe appeal for Esme, who was diagnosed, out of the blue, with acute myeloid leukaemia while on holiday with her parents in Thessaloniki, Greece.

The Handley family, from West Norwood, have already raised £229,000, from more than 6,800 donations in a matter of weeks. But they still need to bring in another £271,000 to fund the treatment, because their only child is not eligible for a second transplant on the NHS – and time is running out.

Rebecca suffered four miscarriages and had to undergo three operations – one of which nearly killed her – to bring their much-wanted daughter into the world, which makes the fear of losing little Esme all the more painful.

The young family has already been deeply affected by cancer after Will’s mum, who was an NHS nurse, died suddenly of lung cancer, aged 62.

Will has since run six marathons in her memory – five in support of Cancer Research and MacMillan.

Esme was diagnosed with high risk acute myeloid leukaemia (AML) while on holiday in Greece in June 2018, at just 22 months old. Her parents became concerned with some bruising on her body which didn’t seem to heal.

On her return to the UK she spent five months as an inpatient at the Royal Marsden, and in September 2018 received a stem cell transplant, after three rounds of intense chemotherapy.

The young girl had six months of strong recovery, during which time Esme turned into the picture of health and energy. But last month the family were told the devastating news that they never wanted to hear – that the leukaemia had returned.

Will and Rebecca sought the advice of several leading global consultants that specialise in high risk AML. They have now been told that Esme’s best chance of cure is a second stem cell transplant, as soon as possible.

But the couple have recently learnt that this treatment will definitely not be available on the NHS, because the standard policy is not to offer second transplants to patients who relapse within 12 months.

Due to the aggressive nature of her disease, Esme simply does not have that long.

Will, 43, said: “Looking at our daughter at her fittest, bubbliest and happiest in months, none of this makes any sense, but equally for me it’s the demon that’s come to me in sleepless nights since diagnosis and is now a reality.

“Having been told that a second transplant would be the fallback option for a failed first cord transplant, we have now learnt that the Marsden, to whom we have inexpressible gratitude for their expertise and care, are sadly blocked from supporting a second transplant until 12 months from the first due to NHS England policy.

“We understand this policy from our extensive conversations with AML experts in the US.

But we know that for Esme the best course of action is try to get to a second transplant as soon as possible, rather than bide our time for seven months with maintenance chemotherapy to try and keep the disease at bay.

“In the US and at other private centres, second transplants are offered within one year, but unfortunately that is not the case here in the UK.

For her second transplant the plan would be to use an adult – rather than original umbilical cord – donor and manipulate more ‘graft versus host effect’ to eradicate the leukaemia – so there is every hope for a permanent cure.

“Esme is two years and seven months old. She loves lions, narwhales and playing hide and seek outside. She has a hand puppet lion by the name of RaRa and she takes great delight in roaring at the nurses and doctors with her faithful sidekick, as well as learning to take her own bloods and change her own dressing, much to the amazement of seasoned staff.

“But sadly, the reality is right now without your help, we have no guarantees she will see her third birthday.

“This is why we have now taken the decision to fundraise to give our little lion cub the best shot at a lasting cure.

“Esme has inspired us every day of her life with her lion-like bravery and her zest for life. We invite you to join Esme’s pride of supporters and move mountains to give her a second chance.”

To support the campaign, visit www.gofundme.com/help-2-year-old-esme-cure-her-leukaemia