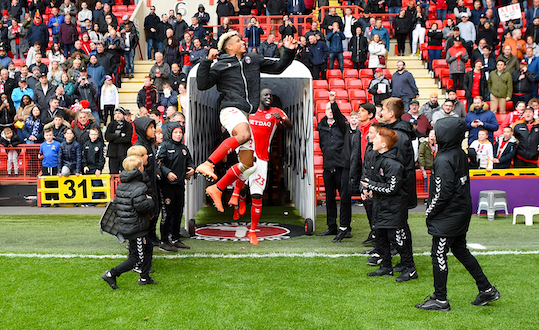 Charlton striker Lyle Taylor admits he did not see the South London club as promotion contenders at the start of the season – and has piled praise on manager Lee Bowyer for giving them a shot at reaching the Championship.

The Addicks top-scorer had a long queue of supporters wanting to meet him after Sunday’s club awards show – the 24-goal hitman being picked by the fans as their Player of the Year.

“I spent two and a half hours after the awards had finished – taking pictures and talking to fans,” said Taylor. “In that time I realised how well we’d actually done this year.

“If we had beaten Barnsley over Christmas then we would have gone up automatically. We’re not sat here then talking about this game or that game – it’s that simple. That’s how well this team has done.

“I don’t think we were tipped to be anything but a mid-table team at the start of the season.

“And the manager came in and said: “I think what we have in here is good enough for X, Y and Z’. Ultimately we feel three points short of automatic promotion.

“But I remember sitting there, and I’ll be honest at this point, and I looked at Pearcey [Jason Pearce], who I have known for years, and I said: ‘No chance – we haven’t got enough’.

“Okay, fine, Bow added three or four more. But what he got out of this group, I don’t think another manager could have done.

“Exactly what he has done and the person he is, is the reason I signed for this club.

“We are an embodiment of Bow’s tactical message, his psychological input and output and his physical input. That’s all we are. We carry his message and do our very best to make the fans happy, make him happy and be successful.”

If it all works out well, then Taylor will be celebrating along with his Charlton team-mates at Wembley – bidding farewell to League One after a three-year stay.

Taylor played a monumental part in AFC Wimbledon going up via the same route to League One in 2016. Not that he has all the keep-sakes from that day.

“I gave them to the club, under the proviso they auctioned them off and that money went back into the club. That was me giving my little bit back.

“I’ve got the shirt from that day and I’ve got one of the footballs – plus all the videos and pictures.

“We still have our group chat from that year. All the boys from that year are still in it – when I see Bayo [Akinfenwa] and Paul Robinson, when we played away at Portsmouth this season, you always replay those moments.

“At Wimbledon now there is a big mural in the physio room of us winning the play-offs.

“It covers the whole wall. Any day you were there you were reminded of it. We’d look and say: ‘Wow, there’s only going to be two or three people left – how much the club has changed’.

“There are only two people still contracted there – Will Nightingale and Joe McDonnell – and neither of those were in the squad that day.

“The manager is not there, Bass [Simon Bassey] is there but no-one else, for one reason or another.”

“It’s up there as a highlight, because we did the improbable at Wimbledon. We weren’t really supposed to be anywhere near the play-offs that year. It seemed to be a bit of a theme at Wimbledon over my years there, because we weren’t supposed to get promoted, stay in the league and then save ourselves again last year.

“They’ve done it again this year. That was kind of the mentality – underdog mentality. Whereas I think now, it’s everybody gunning for us.

“So it’s slightly different. But should we win, regardless of whether I score or not, it will be another big highlight of my career.”