Daniel Farke praised his Norwich City side for turning around a pulsating clash with Millwall on Saturday.

The Lions were leading 3-2 going into injury time but Jordan Rhodes and Teemu Pukki both netted – the latter in the seventh minute of stoppage time – as the hosts sealed a 4-3 win to move to the top of the Championship table.

Farke reckoned that Timm Klose’s first-half goal should have stood, was critical of the officiating which led to Tom Elliott’s opener for the Lions as well as claiming that Pukki’s penalty – saved by Ben Amos – should have been retaken.

The German – asked if he had been involved in such a dramatic match before – said: “Yes – because I work in professional football from the age of 18, so sometimes you have those matches. But it is not that often you have such a night. 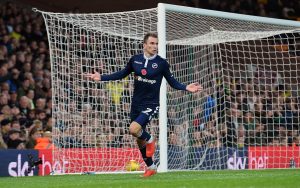 “This just happens when you are full of spirit and commitment. I am really, really proud of this group.

“The last minutes were so emotional and to turn the game after being behind 2-3 after 86 minutes is unbelievable.

“There were so many odds against us and so many things went wrong. We conceded a goal [Tom Elliott’s opener] that was never a free-kick.

“There were several decisions against us with free-kicks. Millwall’s biggest strength is always to be there with [Jake] Cooper, with Elliott. They have an unbelievably strong group of players in terms of with set-pieces. It’s always difficult when you concede so many decisions against you.

“Then we equalise and there is no reason not to give the goal. There was no foul or offside. It was the wrong decision – quite obvious. We showed a brilliant reaction. We scored the equaliser in the second half and had the penalty miss, which is difficult for the head.

“We had an unbelievable strike [from Moritz Leitner] and at that stage we were a little too relieved and were not awake enough to defend the long ball. 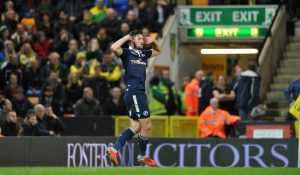 “We were too greedy to get the next goal and it was a total unnecessary loss of the ball and we concede the third goal.

“In the last minutes I got the feeling it was a pretty good performance and we should be in the lead. I felt I had to give the belief to the players – I brought on all our offensive ones and went 3-5-2. All the credit and compliments go to my players. I can have ideas as a head coach but it is up to them to fulfil this.

“To score after 92 minutes and then 97 minutes, the last moment of the game, is outstanding. Not only to turn the game, how we scored the goals was no luck. It was a world-class pass by Emi Buendia and an ice-cool finish by Jordan Rhodes.

“The fourth was a pass full of class from Mario Vrancic.”

“When you watch it back it is more like it should be a repeat because the goalkeeper is standing three yards out of his position. It wasn’t a bad penalty – it was that the behaviour of the goalkeeper was not acceptable. Normally you should repeat this penalty.”