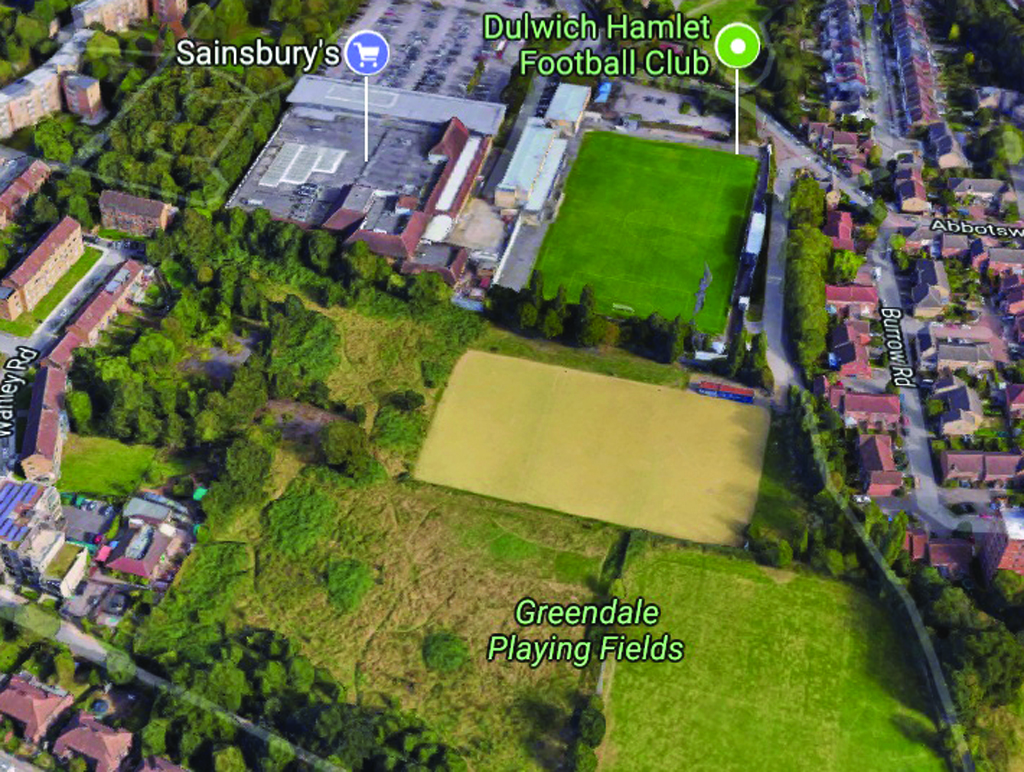 Developers who want to build a new stadium for a booming non-league club have applied to construct 230 flats on their current ground.
Meadow Residential have published details of their plan to move Dulwich Hamlet Football Club a few yards onto a next-door existing artificial pitch and create flats up to eight stories high on the site.
The number of affordable homes in the project, 92, or 40 per cent, would comply with current Southwark housing policy.
The two parties have now begun a consultation on their joint plans with a special website which says: “The success of this planning application and its delivery of new homes is fundamental to the provision of a new stadium and DHFC having a sustainable, long-term future at Champion Hill.”
There would be four blocks up to 27m high. Campaigning residents had demanded new flats be three storeys or less – which they say is the height of the neighbouring blocks – and that there be a quarter of the number currently planned for the scheme.
The joint applicants say work could start on the scheme as early as the summer – but only in the optimistic scenario of planning permission being granted in the next three months.
Their application features:
• A new Hamlet community stadium with increased capacity and modern facilities, including a new clubhouse with bar and lounge, new toilets, changing rooms
• Segregated seating for home and away fans
• club shop
• sporting and leisure facilities for local community groups and schools
• community/commercial floorspace
• new squash courts, a new health and fitness club and a multi-use
games area
• 6,500sqm of new public realm, or “park” linking St Francis
Park and Green Dale, with 300 new trees
• Children’s play space
• Car club facility and electric charging bays

Meadow and Southwark council had last year fallen out over the town hall’s slow processing of the developer’s 151-flat application for the Champion Hill site.

When Southwark threatened to issue a compulsory purchase to seize the land, Meadowretaliated with an even bigger scheme with more than 220 apartments, which is the size of the new scheme.

Meadow before Christmas agreed to give Hamlet £50,000 to ease its financial problems, much of which had been caused by the club being booted out of Champion Hill.

The joint website adds: “The pre-application meetings have been held with the GLA regarding the
stadium, pitch, housing, density and residential mix. The proposal for 230
new homes addresses the new London Plan. It makes the most effective
and efficient use of the site whilst enabling the delivery of a new stadium
and leisure facility, affordable homes (including family houses) and significant
new public realm and landscaping.”

Details of the scheme and a consultation form to fill out are here: http://www.championhillproposals.com/exhibition/