Neil Harris admitted his Millwall side must be more productive in the final third after slipping to a 1-0 defeat at Swansea City on Saturday afternoon.

The Lions chief was once again left frustrated on the road as George Byers’ deflected strike just before half-time proved the difference.

Jake Cooper missed the South Londoners’ best chance of the afternoon, skewing wide from close-range in stoppage-time. The defeat means the Lions have scored just once in the league since earning their first away Championship victory of the season at Ipswich Town on New Year’s Day.

“First half we maybe paid Swansea a little bit too much respect,” Harris said. “We were very disciplined, very organised barring a couple of times they got behind the defence in the first 10 minutes. Their passing patterns, movement and rotation was really impressive.

“The difference going in at half-time was the second phase of a corner. Coming to Swansea I never expected my team to concede from a set-play, I’ve got to be honest, it should be us causing the problems the other way – which we did at times.

“So I’m disappointed with the players in that aspect that we gave too much away on set-plays. The goal is another freak one where it goes through legs and bounces up into the roof of the net. You need a little bit more fortune in that situation. 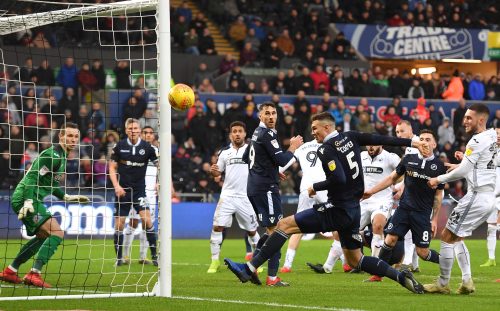 “We thought it might be a case of hanging in there, being disciplined and we will get a chance. And it came right at the end. My initial thought was that Hutch [Shaun Hutchinson] should do better and hit the target and then Coops puts his leg out on the goal-line and it goes wide.

“Frustration? Yeah, but I’m happy with some aspects of the performance. It was another really good performance second half, I thought we dominated possession, certainly the first 25 minutes we were a lot more aggressive in our approach.

“My only gripe was the amount of positions we got in during the second half and we didn’t ask enough questions of the goalkeeper.

“I think Swansea dominated possession for a lot of the game – that showed what a technically good footballing side they are. I can look back and be a lot more pleased with the performance. I think what is clear after 30 games is that you get what you deserve in this division.