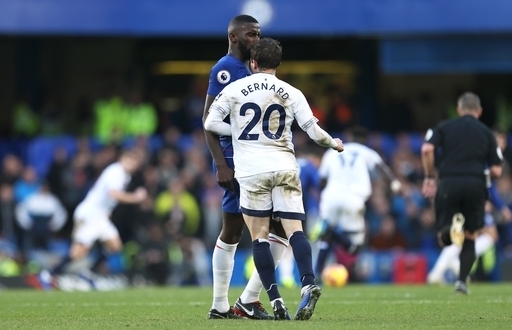 Chelsea’s poor league form at home of late cost them the chance of going top of the Premier League this afternoon after a 0-0 draw against Everton.

A win would have propelled them about Manchester City and Liverpool, albeit for a couple of hours.

It might be the last chance this season for Maurizio Sarri’s men to hit the height of number one.

While they remain unbeaten in the league and still in a Champions league slot, the fact is Chelsea cannot overcome sides playing with a discipline, dogged defence.

Everton’s Jordan Pickford needed to be in top England form, as when Chelsea did produce a dangerous attack, notables from Marcos Alonso and Eden Hazard, he was equal to the task.

This draw, their third in four home games means it’s six point down the drain.

To set the scene, Everton started the better of the two sides, with Chelsea failing to get a grip in midfield and making lots of misplaced passes.

Bernard had a powerful right-footed drive on12 minutes which inched past Kepa Arrizabalaga’s right post.

Yerry Mina was given a yellow car for a scissor-tackle on Eden Hazard on 20 minutes.

Alonso, free-kick inched towards Jordan Pickford’s right post but the England goalkeeper was well placed to watch it zip past  the woodwork.

Jorginho got his yellow for hacking down Gylfi Sigurdsson on 28 minutes. The two had tussled for the ball, with the Italian losing his composure and sending the Iceland midfielder to the ground.

On 30 minutes, Luiz had the ball, stopped and then threw his arms into the air to cajole the supporters into action.

N’Golo kante was the second Blue in the book for a foul on Richarlison.

From a Willian free-kick on 40 m injures, Alonso had lost his marker and was free on the apex of the six-yard box. He produced a spectacular left-footed volley that forced Pickford into an equally spectacular save. It was the Blues first effort on goal.

Rudiger and Bernard were both yellow-carded on 45 minutes after the German defender scolded Bernard for going to ground too easily on a Willian challenge. The Brazilian reacted by putting his head to Rudiger’s face, at which point he also fell to the ground.

There were no changes at half-time from either side, but the Blues could have scored with seconds of the restart but Pickford thwarted Alvaro Morata at his near post.

Sigurdsson forced Kepa into a finger-tip save on 56 minutes showing the away side was more than capable. The Blues were lucky to escape a penalty when Rudgier appeared to handle a deep cross into the penalty area, whil a minute later Morata demanded a spot kick when challenged by Mina.

A beautiful defence-splitter by Hazard sent Willian clear. But the Brazilian stroked his right-footer acropolis Pickford and just wide of the goalkeeper’s far post.

Hazard followed this up with a firs essay drive which Pickford parried away for a corner.

Tjhree minutes later and a powerful run and drive saw his shot take a deflection and goal-bound but Pickford, again was in the right spot and tipped the ball over the crossbar.

Cesc Fabregas came on for Jorginho on 64 minutes, while Ademola Lookman replaced Bernard.

Alonso then saw a daisy-cutter from deep, ricochet off Pickford’s left post as the home side pulverised the Everton defence.

Pedro was next up, replacing Willian on 68 minutes.

Morata thought he had put Chelsea into the lead on 72 minutes but he was well offside when Cesar Azpilicueta send in a low drive and the Spain forward tucked homie.

Ex-Toffeman Ross Barkley entered the fray with 10 minutes left, he replaced ineffectual Mateo Kovacic – Barkley understandably got a rousing cheer from the home fans, less so from the away ones.

Chelsea head into the international break third in the league and face Spurs, away at Wembley in their next league match.