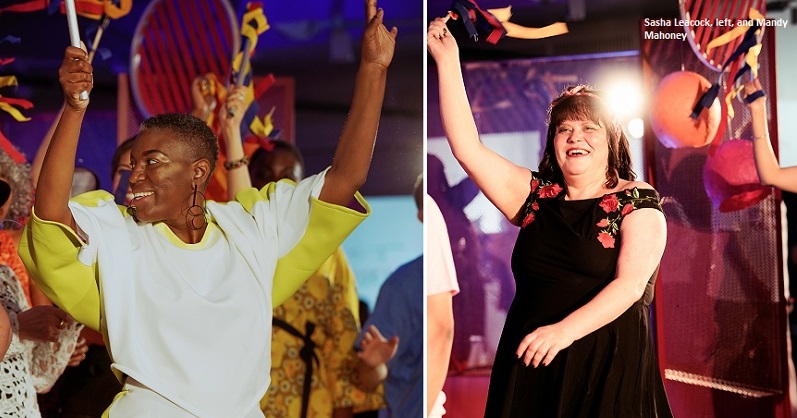 Twenty models undergoing cancer treatment have strutted their stuff down the catwalk in an uplifting and inspiring fashion show.

The models wore the latest fashions in celebration of Cancer Survivors’ Day at the Cancer Centre at Guy’s Hospital on June 23.

Taking to the catwalk was 48-year-old Sasha Leacock from Penge, a part-time arts manager and mother-of-one treated for breast cancer in 2018.

Sasha said: “Being part of the fashion show was my way of celebrating the end of my cancer treatment, giving back to Guy’s and St Thomas’ and living my life more fully. “I had an amazing time and I really enjoyed being on the catwalk.”

Sasha was treated at Guy’s and St Thomas’, where she had eight sessions of chemotherapy and surgery to remove the lymph nodes in her left underarm.

She finished her treatment last January after undergoing radiotherapy to remove any remaining cancer cells and is now in remission.

The mum-of-two was diagnosed with breast cancer in 2011. She’s had five further recurrences and is now living with incurable metastatic breast cancer.

Mandy, from Bromley, said: “I know how fragile my health can be so I want to make the most of life. I now say ‘yes’ to all the opportunities that come my way, even the mad ones.”

Mandy has already signed up for the world’s largest inflatable obstacle course, entered a powerlifting competition with her daughter, agreed to take on a 10km run, and, despite a fear of heights, climbed the O2.

The show also showcased clothes from Outsider, Fox in a Glove, Let It Gibbon, June’s Young Millinery and Peacocks.

David Cheesman, cancer programme director for Guy’s and St Thomas’, said: “Cancer Survivors’ Day is always a highlight of our calendar and this year was no exception.

“For our fifth year, we wanted it to be our biggest and best, and having spoken with visitors, the feedback couldn’t have been better.

“I would like to thank everyone who attended and send a special thank you to all of our staff and volunteers who worked so hard to make it such an uplifting and inspiring day.”

Staff were inspired by a visit to the Sidney Kimmel Comprehensive Cancer Centre at John Hopkins Hospital in Baltimore, USA, where staff and patients have celebrated Cancer Survivors’ Day for more than 20 years.

A celebration walk, started by Jonathan Dimbleby, also celebrated cancer survival, heading out along the South Bank and over Waterloo Bridge before heading back, passing many of London’s landmarks and circling part of the Thames.

There were 60 participants taking part, raising money and awareness of Guy’s Cancers, many of whom have either been treated at the Cancer Centre or have had a close family member treated there.

Guy’s and St Thomas’ Charity raises money to make the Trust’s life-saving care go above and beyond; from big things to small touches that help patients and their families feel looked after.