She learned to sing in a Battersea Pentecostal church and a friend one day asked her, as they chatted after a party, if she wanted to perform regularly in a jazz club.

The former Forest Hill teacher, from Mitcham, was working in a school in Dubai at the time, and she did so well on stage that she could have ended up famous and wealthy in the United Arab Emirates.

But she wanted to make her name here and come home to her family.

But now she is only a step away from becoming the last British singer at the Eurovision Song Contest before Brexit.

“I want to stress the importance of representing my country with Brexit going on,” she said.

“There has been a bit of a dampener on the UK – but this is a chance to have some fun.

If we are going to leave, we will leave with a great song. That is a bit of pressure, but I can handle that because I believe in the song.”

Thamesmead-born Kerrie-Anne had been teaching at St Francesca Cabrini school in Forest Hill Road, and then at a British school in Dubai, but earned enough as a singer there to quit the classroom.

She got as far as judges’ houses in the 2015 X-Factor – but Simon Cowell did not put her through.

She said: “It was strange how I began singing professionally with that random conversation – the friend just asked me if I was interested in singing six nights a week in an underground jazz club.

“Since X-Factor, I have performed at private members’ clubs and posh restaurants in Mayfair, as well as in Dubai – and did a couple of footballer weddings.

I am not allowed to say who they are – even my parents don’t know.

“I thought the email from the BBC about Eurovision was a hoax – that someone was having a laugh.

After walking away from my laptop, then thinking about it for half an hour, I started to wonder what would happen if I responded.”

There have already been eliminators and the former pupil of Lonesome Primary School in Grove Road, Mitcham, is now gearing up for You Decide on BBC2 on February 8 at 7.30pm, competing against two other singers.

“It has been gruelling but exciting,” said Kerrie-Anne, who also went to William Morris School in Recreation Way, Pollards Hill and the now-closed Rowan Girls Secondary School in Rowan Road, Mitcham. 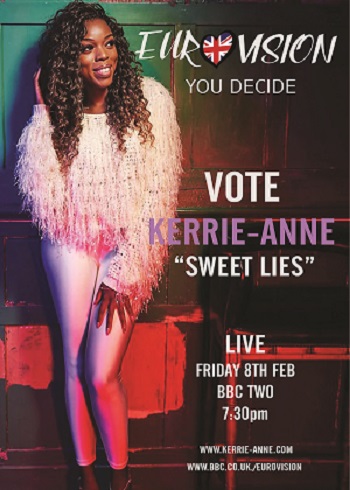 “I know it is a good song – it has already had 106,000 YouTube hits in just a week. It is already being played in clubs because people love to dance to it.”

Some of those online hits have been mum Audrey Phillips, grandmother Sue, her siblings and a niece.

“There is a lot of family support,” she said. “The programme will be live, so there is no room for mistakes, which is exciting. I am a live performer.

“I would like South London to be celebrated – Eurovision is not widely watched around here. But I want to celebrate unity and diversity on a big stage.” She is ready for the downside of success in Eurovision.

“I don’t mind singing it several times,” she said. “I could have been wealthy and famous in Dubai but if I can crack Europe, the job is half done.

“The most important thing is representing the UK. “Whatever comes after that is a huge bonus.”