Since last weekend’s defeat at home to QPR, Millwall manager Neil Harris had been calling for less negativity and a bit of perspective.

So let’s provide that overview. Prior to Saturday’s draw with Huddersfield Town, Millwall were 17th in the Championship table with two wins, three draws and three defeats to their name. A fairly respectable record considering the teams faced so far. Preston, West Brom, QPR and Fulham are all either in and around the top six. In fact the Baggies sit top of the table after the weekend’s results.
Saturday’s trip to The John Smith’s Stadium posed a different challenge to any so far this season. 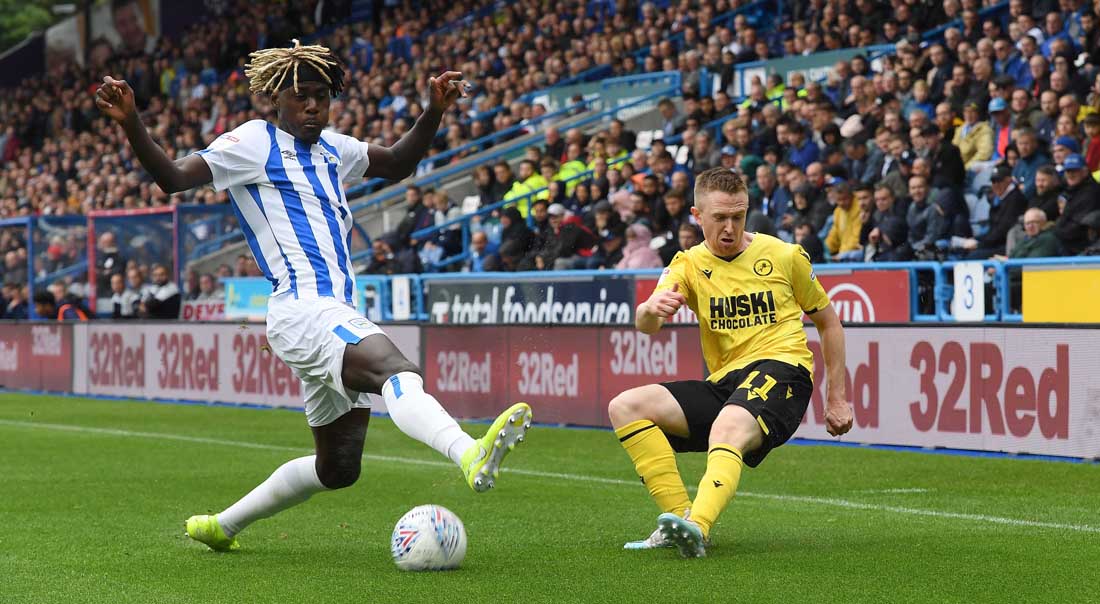 This was the first time that Harris’ men had faced a side in the bottom three and the first time they had come up against opposition without a win this season, if you take out the opening day fixture against North End. 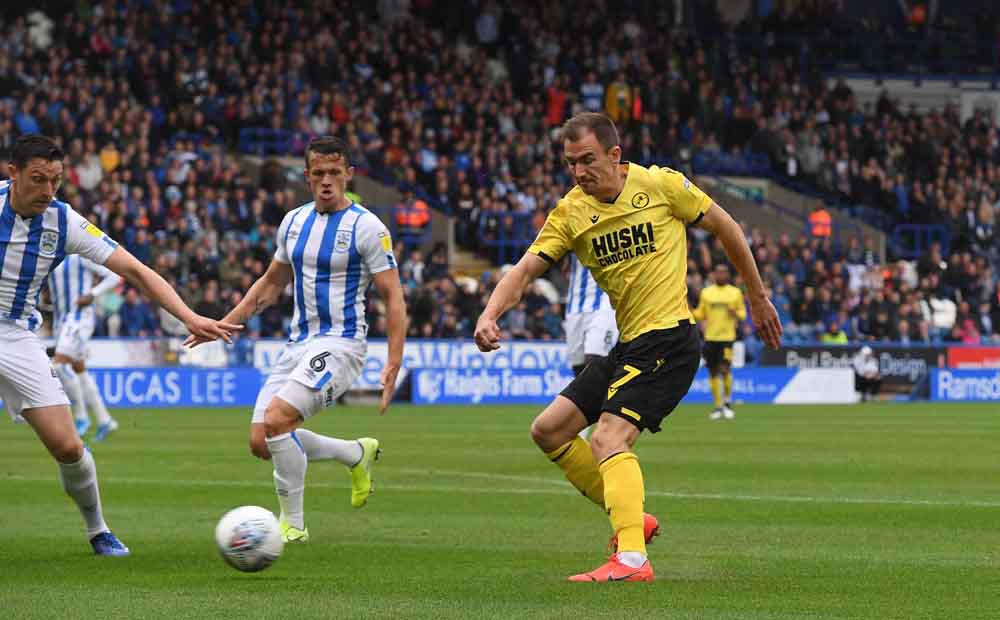 When Fraizer Campbell gave the hosts the lead against the run of play there was a sense that this could be another one of those days for Millwall. Neil Harris’ men have not won away in the league since March, when Ben Thompson’s double sealed a 2-0 victory at Birmingham City.

Considering Shane Ferguson was sent off for a second bookable offence with 10 minutes to go, a draw is perfectly acceptable. 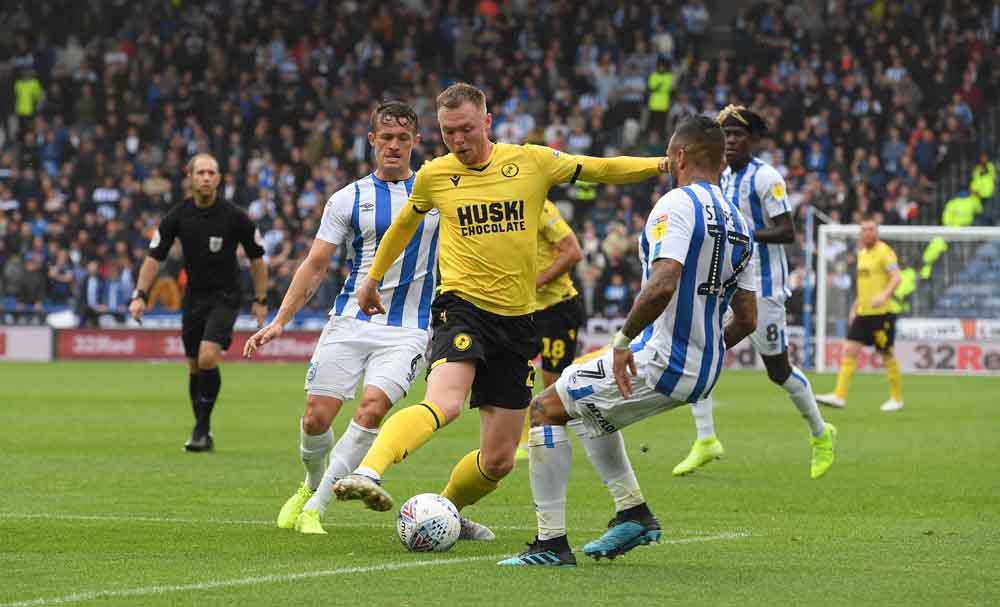 This is a big week for the Lions with Luton tomorrow and then Leeds at The Den on Saturday before the next international break. The Huddersfield result was a good start.

Goalscoring has been a problem for the Lions this season. Matt Smith’s equaliser was just the seventh goal that the team have recorded this season. Only Brentford and Barnsley have scored fewer.

However, it’s not for the want of trying. 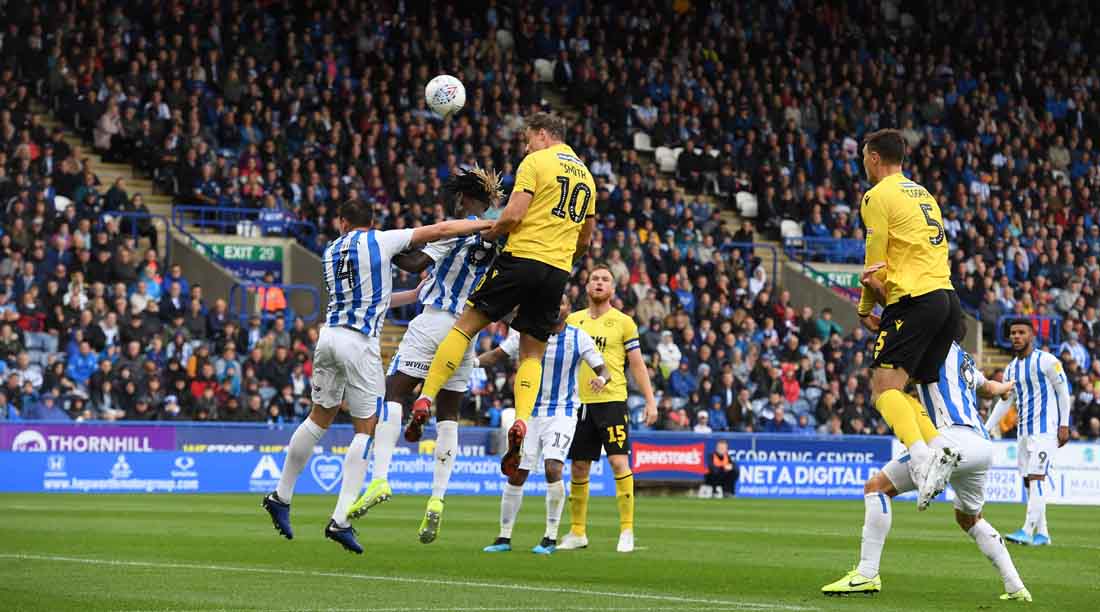 Millwall have had a total of 85 shots in their nine league games this season but managed to convert just seven into goals.

It’s a statistic that will leave Harris scratching his head somewhat, considering the number of set-pieces and general aerial threat that his team possess. 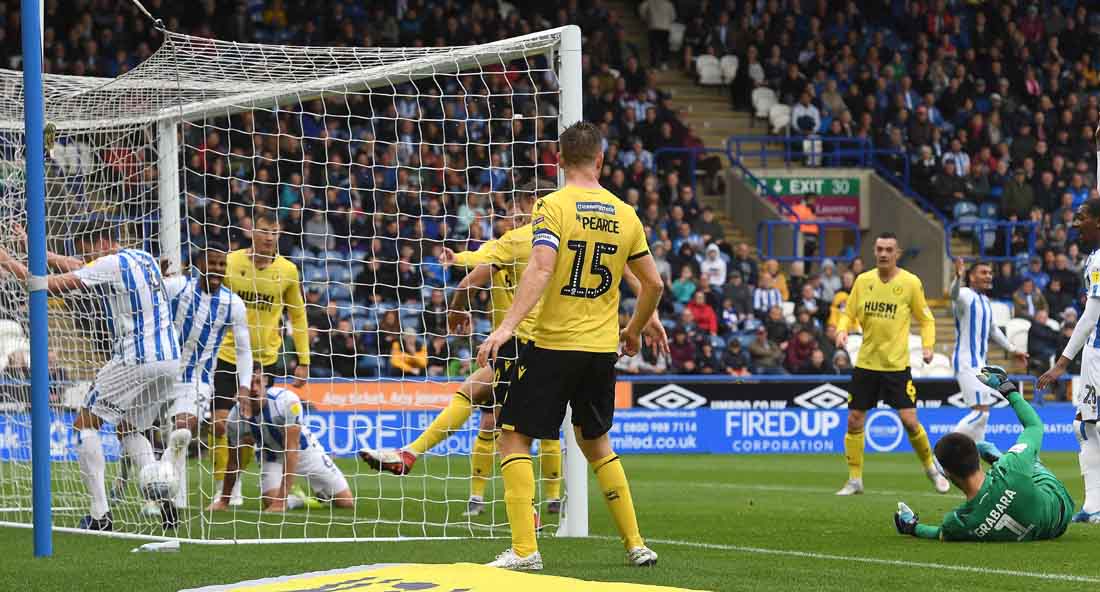 A lot has been made of the fact that the majority of Millwall’s goals this season have come from set pieces and not from open play. Surely though as long as they go in, does it matter how they arrive?
It would also be fair to say that Millwall have not had the best of luck when it’s come to officials in the last few seasons. That could be about to change. 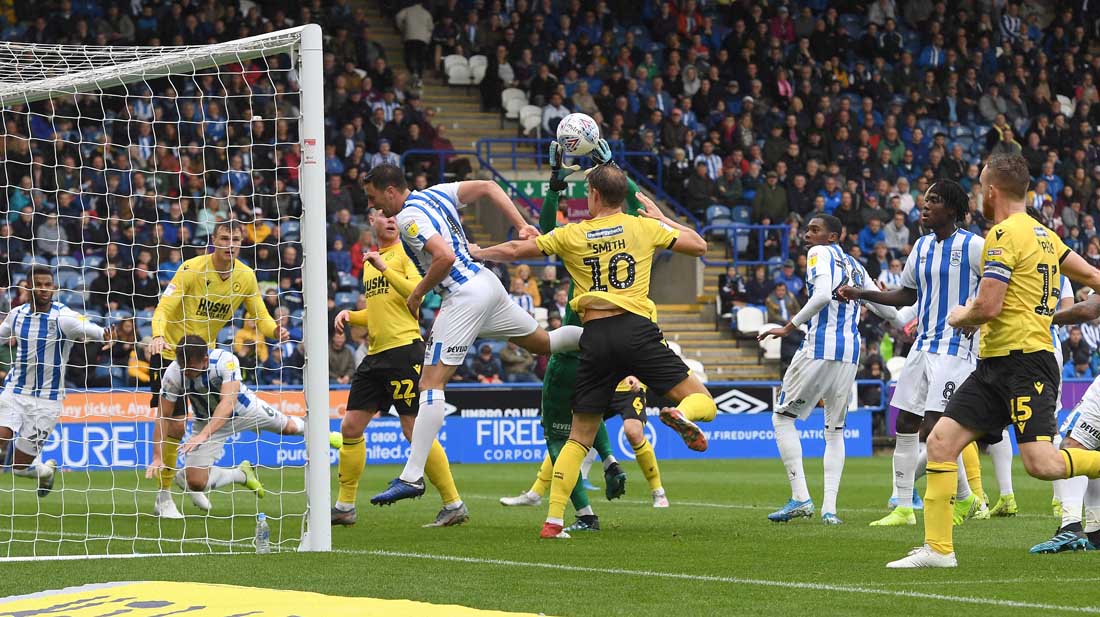 Danny Cowley’s men twice felt they should have had a penalty kick. Firstly on former Charlton striker Karlan Grant and secondly on Adama Diakhaby. Jake Cooper had his heart in his mouth but thankfully referee Jeremy Simpson waved away the protests which angered the majority of the 20,781 in attendance.

“The first one I thought there was nothing in it,” said Harris. “The second one was a long way away from me and Danny, so I couldn’t tell for sure. 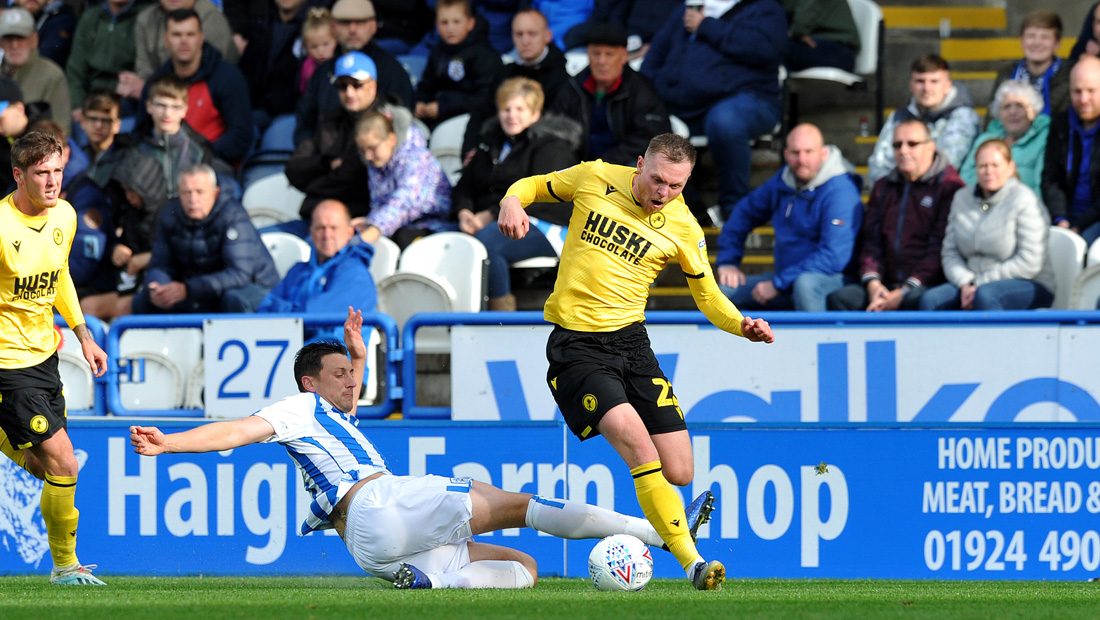 “I haven’t spoken to the players but if we have got away with one then it’s one that we deserved to get away with. Jed [Wallace] has a great run, takes on [Tommy] Elphick in the penalty area, has a shot, the keeper makes the save of the day – he made some good saves today – and the referee gives a goal-kick.”

Shane Ferguson’s second booking means he will miss tomorrow’s trip to Luton Town.
But there was no criticism of the Northern Ireland international for the cautions he picked up that led to his dismissal. 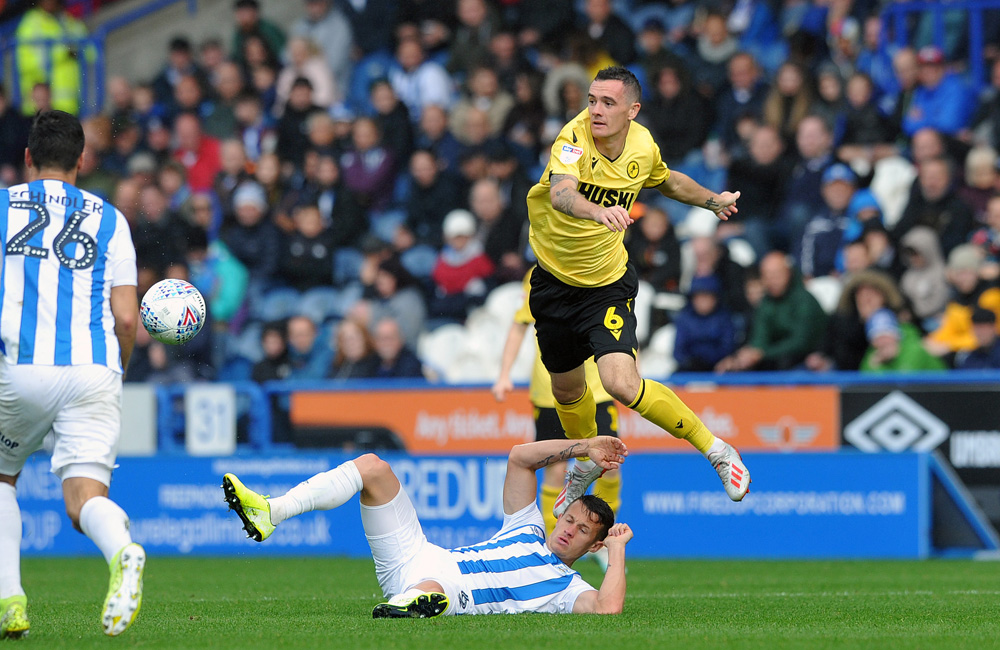 “They were two fouls that we had to make,” said Harris. “Rightly or wrongly it’s helped us get a point  and he pays a price for other people’s mistakes, really.”

Harris went back to basics with a 4-4-2 formation that has served him well over his time in charge.

He took a risk in his team selection, deciding to drop both Ben Thompson and Jayson Molumby to the bench and bringing in two players that divide opinion amongst the fanbase – Shaun Williams and Ryan Leonard. The former is Millwall’s longest-serving player and showed his experience on Saturday. 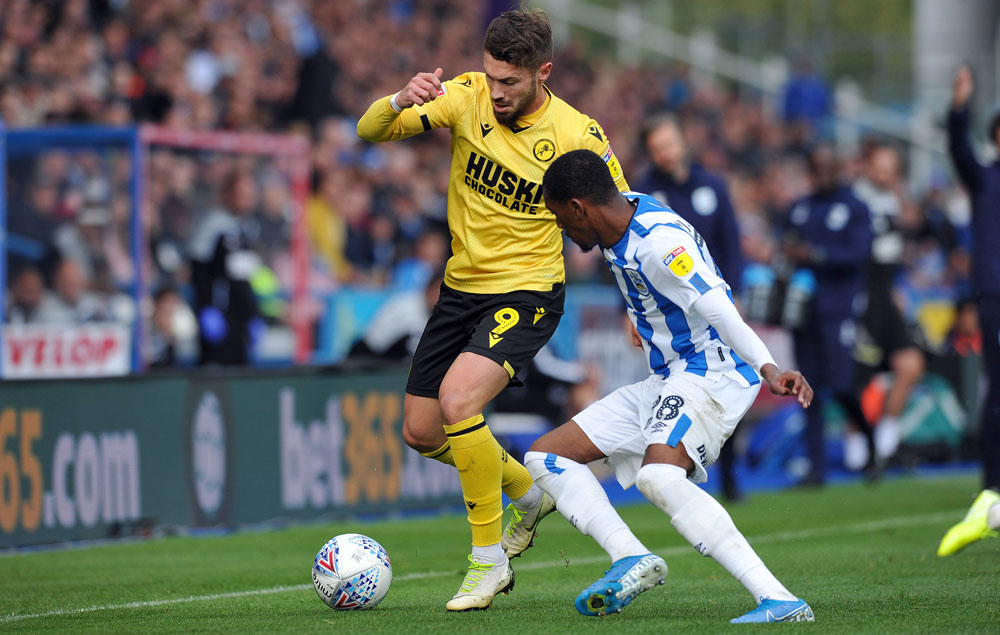 He made some key challenges late in the game, particularly after Ferguson’s red card.

Harris believed he needed some experience in midfield for the game and the manager was quick to praise both Williams and Ryan Leonard.

“Lenny wants to run and step forward and he was outstanding, one of his best games in a Millwall shirt. 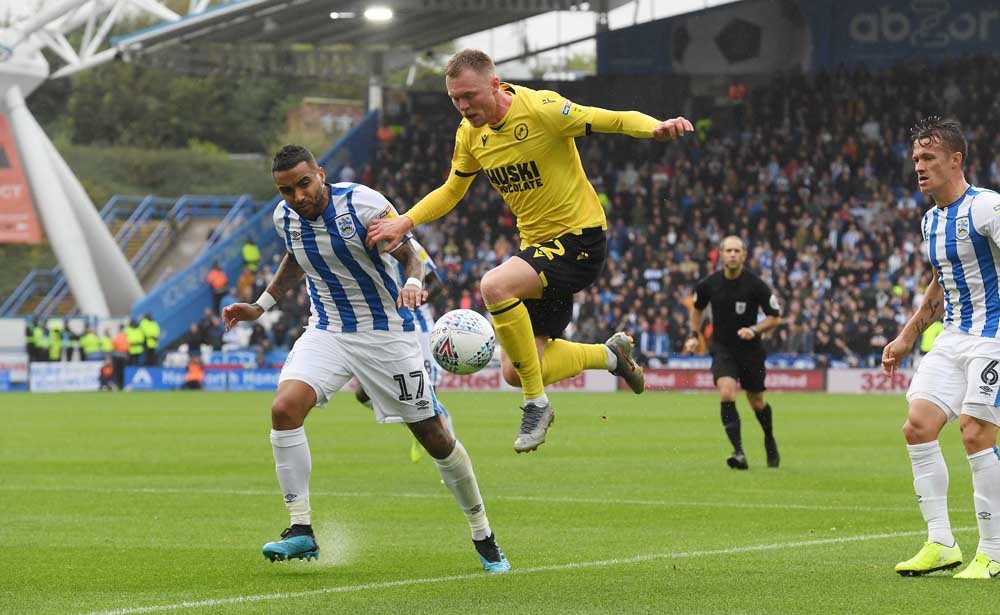 “Shaun gives you that balance and playing with Fergie at left-back we had the right balance.”

Many have classed this as a significant week for the Lions, who head to Kenilworth Road with something to build on ahead of a titanic clash with Leeds United.