Tom Bradshaw hasn’t always looked forward to the grind of pre-season – but the Millwall striker is definitely relishing this one.

The 26-year-old frontman, a seven-figure signing from Barnsley at the end of last August, only played 217 minutes for the Lions in the 2018-19 campaign.

Bradshaw suffered cruciate ligament damage to his right knee against Brentford at Griffin Park – his season ended by mid-November.

But now the Wales international is back.

Bradshaw admits it is almost like a second career start at Millwall, who have seen Lee Gregory and Steve Morison both move on this summer.

It is time for a new attacking combination to pick up the gauntlet.

“Last season didn’t go to plan at all for me,” said Bradshaw. “I had my first serious injury. It’s been a long eight months.

“I’m just excited to be back with the lads, fingers crossed it all goes well.

“I’ve been signed off now [from the medical department]. I’ve been in all summer continuing my rehab, making sure everything is right, and I’ve passed everything.

“I’d been quite lucky in my career. I’ve picked up injuries here and there, but nothing serious. It was almost a bit of disbelief when I found out. As a footballer it is almost the one injury you don’t want to get told you have got.

“It took some time to process it and get my head around it. It was a long old process, but I feel stronger for it.

“I got quite lucky that my little girl was born just a couple of weeks after it, because it gave me a big distraction. That first four or five weeks when you are on crutches – you can’t really walk – then it is tough.

“You go through dips. It’s a long time you are out for and you just want to be helping the lads out on the pitch.

“We weren’t necessarily doing as well as we could last season and every footballer thinks ‘I want to be out there’. 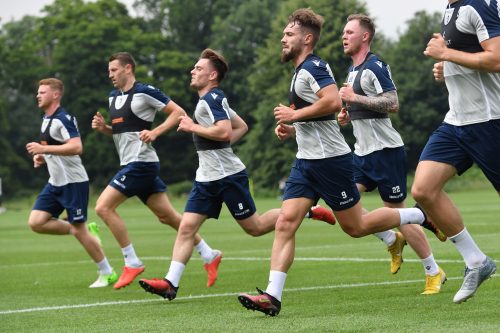 “It’s tough watching that amount of football without being involved.

“You still get paid, but ultimately you’re a footballer because you want to play football. In some respects when you are out for that length of time it isolates you from the squad.

“The lads and gaffer were great keeping me involved but you aren’t playing or training with them – or travelling.

“You feel a little bit left out. That was definitely tough.”

Bradshaw was in at Millwall’s training ground over the off-season as he strengthened his leg.

“I still got a break and time to refresh the mind,” he said. “It was about ticking over and staying on top of my fitness and gym work.”

Gregory and Morison were a prolific and highly effective double act up top for the Lions.

But Stoke City have confirmed the signing of Gregory – top-scorer for the Lions in the past four seasons – on a free transfer. Veteran Morison will spend the season on loan at Shrewsbury.

Bradshaw said: “They are legends for Millwall. It was before my time here but their partnership over the years has been second to none. They’ve been brilliant for the club.

“Sometimes in football it happens where it is just time for players to move on.

“I’ve taken everything I can from those two – how they have played and how they have made such an impact on the club. Hopefully I can apply that to my game.”

The suggestion when Bradshaw put pen to paper was that the Lions were already succession-planning to a degree, knowing that Gregory’s sights were set on a change of scenery and a move nearer to his native Sheffield.

“I spoke to the gaffer a lot and he’s helped me a lot in terms of how he wants me to play,” said Bradshaw. “In some ways modelling myself on what Gregs has done at Millwall – whether he is up top on his own or in a two. His big strength was running down the channels, getting hold of the ball and scoring goals. That’s the basics to apply as a striker.”

Bradshaw only started twice for Millwall before being sidelined.

“That first five or six weeks it was just a case of settling in and learning,” he said. “Every time you go to a new club you have to learn how the new manager wants you to play. I felt like I was still in that process when I got the injury.

“But watching for that length of time from the sidelines and watching the team play has given me a much greater understanding. Hopefully I can hit the ground running.

“The year before I signed it was an exceptional season for the club to almost get to the play-offs. Last season was tougher. That’s the nature of the beast – the Championship is such a strong league. We’ll just try our best and aim to excite the fans.”

The classic question pitched to strikers is if they set a goal target.

“I want as many as I can get because the more it helps the team out,” said Bradshaw.

“Having a long-term injury just ignites that passion you have always had in you as a footballer.”