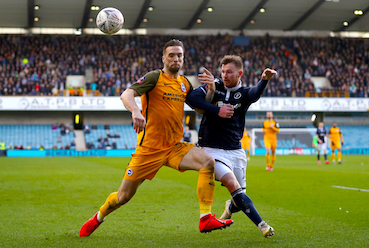 Ryan Tunnicliffe reckons there is no reason that Millwall cannot pull off another “epic” win over Leeds United – with the two sides colliding at Elland Road on Saturday.

Midfielder Tunnicliffe said: “We were the better team when we played them at The Den this season and we all remember what happened when we last went there – we beat them 4-3 in an epic game.

“We will be going there with a lot of confidence. Anyone can beat anyone in this league – not many would have tipped us to go to Birmingham and win 2-0 [in Millwall’s last away match].

“The next one is a massive match and not just because of where the two clubs are in the league – but also there is a rivalry as well. It’s a good one for us to go into after having a bit of a rest.

“Everyone is going to be massively up for it and want to be playing.”

The former Manchester United and Fulham man is aware of the qualities of Marcelo Bielsa’s side.

“It’s hard not to watch them because they seem to be on the TV every week,” he said. “I know all about them.

“To be top of the tree from probably the first week of the season up until recently – when you consider how tough the division is – that takes some doing. They are a good team.

“But if we have the same application that we had on Sunday against Brighton then it is going to be massive in keeping us in the league.”

Lions chief Neil Harris has already demanded that the SE16 outfit make the most of their five home games in the run-in.

“Fifty points is the goal at the start of the season,” said Tunnicliffe. “Nine times out of 10 that means you are safe. Then you go from there. The plan is to get there as quickly as we can, lose a few of the worries, and then see what we can do.”