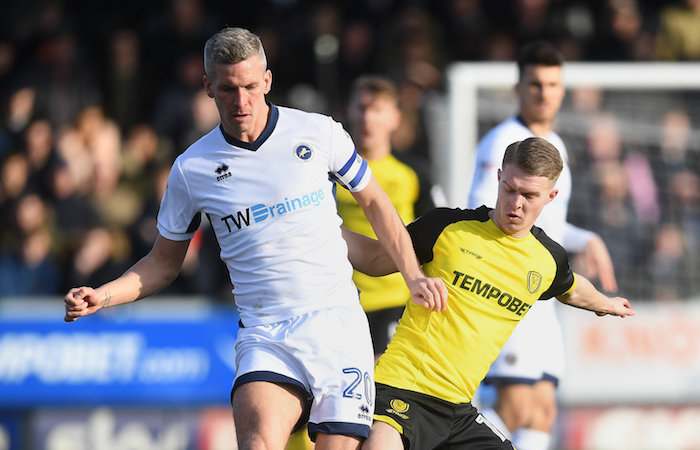 Steve Morison has broken down Millwall’s pressing tactics and assured fans: “We know exactly what we are doing.”

The Lions have not given any Championship opposition an easy time with a number unsettled by the high-pressure approach of Neil Harris’ side.

And Morison has detailed the roles that he and strike partner Lee Gregory fill in that approach, even if they are largely excused the training ground drills.

“Funnily enough we don’t take part in those because it is boring,” he said. “Myself and Lee go off with Tom [Elliott] and Tim [Cahill] – sometimes Fred if he is not playing on the wing.

“Then for the last 10 minutes whoever is up front for the next match has to join in.

“Our job is to dictate when we press and how we press. From my point of view, that is with my voice and actions.

“If the ball is transferred across the backline and we can’t get close to the centre-half then I’ll pull Lee back – we’ll get in shape on the edge of the halfway line and wait for them to come to us.

“Once they have gone pass, pass, pass and it goes to one side where we can lock in, that’s when we’ll trigger and everyone goes.

“It’s just waiting. We can hear the fans getting frustrated. They think we’re not doing this or not doing that. It happened on Saturday. I came back to defend a corner and they are having a go. It was quite quiet so I just turned around and said ‘can you not just relax? We know what we’re doing’. When we don’t press it’s because we don’t want to press – not because we can’t do it.

“We have a gameplan. We might have players who we want to be on the ball. Both Burton’s centre-halves are right-footed, so when it went to the left-sided one was when we press to keep him on his left foot.

“We want him to try a 30-yard pass with that foot, it gets cut out because he can’t play the ball properly.

“We’ve done this for nearly three years now under the manager. He has added quality to it.

“Ben Marshall’s deliveries on set-pieces – people don’t notice that. His quality on corners and free-kicks is unbelievable.

“Then he can introduce a Fred [Onyedinma] with pace. He carries the ball 30 or 40 yards.”

You can still get odds of 100/1 for Millwall to get promoted. Sheffield United’s 3-1 win at Reading on Tuesday pushed the gap from six points to seven.

“You dare to dream,” said Morison, whose goal at Wembley in May took the Lions into the Championship. “All we can do is worry about winning our games.

“I suppose the major difference is we are coming in after matches now and looking at how Bristol City, Sheffield United and Leeds got on rather than Burton, Barnsley or Sunderland.

“Out of all of them we’re in a very good position because there is no pressure on us to make the play-offs. If we do, what a story that will be. If we don’t then we’ve stayed in the league very comfortably at the first time of asking.

“The same thing happened when we got promoted last time, we were seventh for a hell of a long time and fell down to finish mid-table. Then next season becomes even tougher. Other teams invest a lot more than what we are. You have got to produce for a second time.”

The January signing of Millwall legend Cahill added to competition up front. But the Australian international and Elliott have been largely left on the sidelines as the Morison-Gregory pairing continues to deliver.

“It’s not just me and Lee – I don’t think anyone could get into our team right now,” said the Millwall captain. “Our form in recent weeks means that is the case unless you are bringing in Lionel Messi or someone unbelievable at this level.

“When you come into this club you have to learn what we do, when we do it and how we do it.

“Until you have learned that and are up to speed then the gaffer would kick himself if he played someone who didn’t understand that 100 per cent and we ended up losing the game because of it.

“Timmy coming in gave the club a boost, there was a lot more attention and media on it, but the gaffer managed it very well. He could’ve quite easily rushed to put him in when he wasn’t quite ready and led to injuries.”