Matt Smith, Connor Mahoney and Tom Bradshaw were all on target for the Lions as they cruised through at The Den.

Mahoney scored a fine goal on New Year’s Day in the 3-1 victory over Luton Town. And the summer signing stroked home from the penalty spot to help see off County.

Lions assistant manager Davidson said: “He’s probably had a slow start to his career here. When you watching him in training, he does things that make him probably one of the most talented players we’ve got.

“It’s now for him to turn that into match performances. What he did on New Year’s Day probably gave him a boost and that belief in himself that he has the ability and he can produce bits of magic.

“Today he was probably the bright player in our team, without Jed [Wallace] playing. He was the one who said ‘I’m going to be the man to produce’.

“You’ve got to remember Connor is still quite young and to mature he needs to play games. Championship football is a physical, tough game – it’s not nicey-nicey and he has to learn that as well. 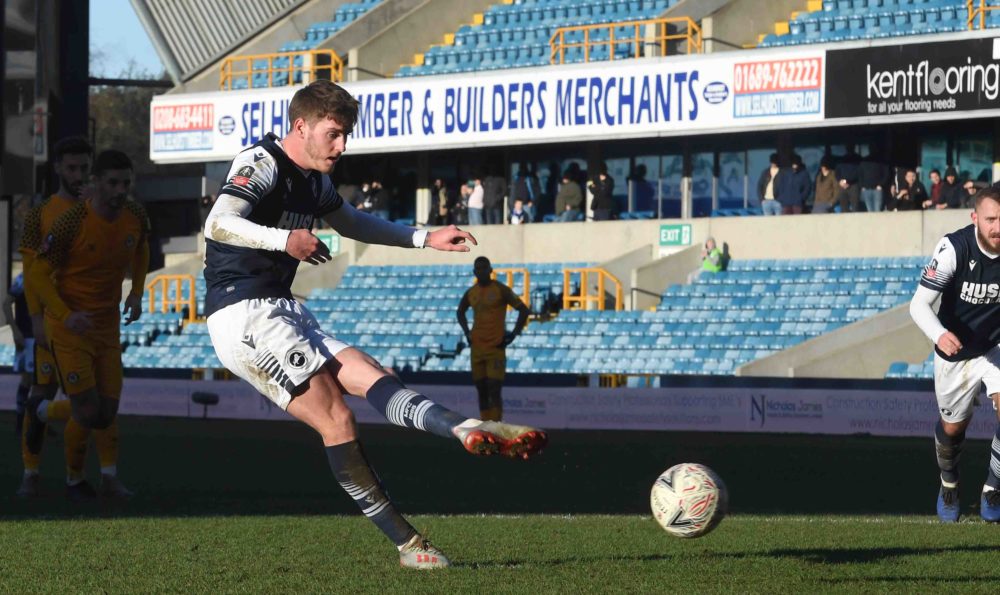 “I hope he gets better at that because once you get that end product he does deliver. He was excellent again today and could’ve scored a couple more.

“Some players are good training players who don’t produce. Hopefully now Connor can start to translate that on to the pitch.

“I think somebody had to step up. We’re looking for someone to help Jed [Wallace]. Jed has been excellent going forward for us – his enthusiam and energy. But it’s good for someone else to step up – Bradders and Matt Smith have started to do that.

“With a small squad it is good that happens. They can stick together. It’s one of the reasons we’ve been on a decent run of results.”

Millwall reached the last eight of the competition last season.

“It was a tough game,” said Davidson. “They made it quite difficult for us.

“We know their recent exploits, we knew it was going to be a tough game – they are obviously very physical and put us under a lot of pressure with balls forward.

“I wouldn’t say they played the long ball, they just put balls forward and put us under pressure.

“We get an early goal and it probably settles down a little bit. We were asking the players to move the ball quickly and create space, which we did but probably didn’t have the end product from that. That was the disappointing thing in the first half.

“But these kind of cup games, I’ve been here before where the underdogs get the first goal and it becomes a really tough game. We’re delighted to be in the next round.