Millwall and Sheffield Wednesday grafted their way to a 0-0 draw at The Den tonight – but the hosts suffered an injury scare with Lee Gregory.

The Lions’ top-scorer was replaced in the closing stages of the contest after undergoing treatment.

And if Gregory coming off was not just a precaution, then it leaves them without a third frontman with Tom Elliott and Tom Bradshaw both already missing with injuries as well.

The Lions grafted hard in the opening 45 minutes and created the chances, as scant as they were.

It was more nearly moments then actual big misses or saves.

Kieron Westwood looked uncomfortable with the swerve on a Jed Wallace free-kick but Liam Palmer managed to get to the rebound before Lee Gregory.

Michael Hector also snuffed out the danger before that when Gregory’s cross was headed back across by Ben Marshall.

The Lions produced an excellent passing move – at odds with the fare served up in the first half – only for it to just evade the sliding Ryan Leonard.

But at least Millwall were popping up in the visitors’ box. Unlike Wednesday, it summed up their lack of penetration that Barry Bannan was more notable for his defensive work. Although the Scot did manage one threaded ball into the penalty box which needed Shaun Hutchinson to hack away Palmer’s cross to deny Lucas Joao a close-range chance. 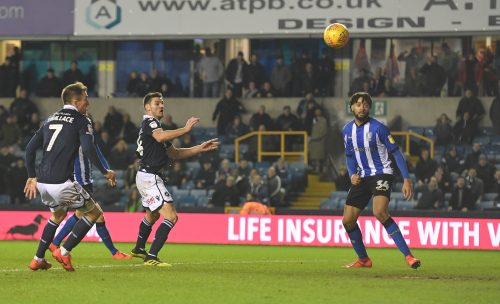 Wednesday started the second half with more purpose and Joao’s full-blooded strike was parried away by Jordan Archer on 48 minutes.

A moment of quality from Jed Wallace on 57 minutes saw him touch the ball past the outfoxed Morgan Fox and his cross was met near post by Aiden O’Brien, but Westwood was alert to the danger.

O’Brien struck another effort straight at the Wednesday number one soon after.

Substitute Steve Morison was next to get a chance as he broke on to Jake Cooper’s towering header forward but he smashed his half-volley wide of the right upright.

Ten minutes from time and Millwall were denied again. Gregory whipped the ball to the far post, Morison guided it back across and Marshall’s header was hacked off the line by Jordan Thorniley.

Fred Onyedinma was introduced in the closing stages. He did excellently to win the ball off Palmer on the touchline and drove into the box, but then seemed to confuse even himself with his step-overs as control evaded him at the crucial moment.

Steven Fletcher slammed a late opportunity for the Owls wide of the target but it would have been harsh on Millwall if they had emerged with nothing.