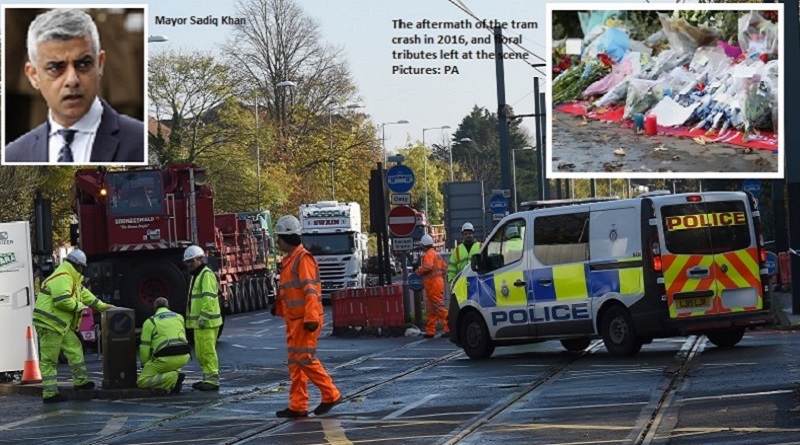 A London Assembly Member has blasted the Mayor of London for failing to provide key evidence and allow an independent investigation into the Croydon tram crash.

Conservative Assembly Member Keith Prince challenged Mayor Sadiq Khan during Mayor’s Question Time last week, saying there was clearly “something to hide” and “more than meets the eye” after an Assembly cross-party motion calling for an independent enquiry was backed.

AM Keith Prince said: “It is deeply troubling that concerns have been repeatedly raised about why Transport for London (TfL) failed to provide key tram safety evidence to the relevant authorities investigating the Croydon tram crash.

“It is now incumbent on the Mayor to set up an independent and comprehensive investigation into TfL’s conduct in the wake of the crash.

“At first I thought this was more likely to be a cock-up than a conspiracy, but the repeated attempts to avoid an investigation suggest that TfL is hiding something.”

The 2016 crash killed seven people and left a further 62 injured after a speeding tram was derailed at Sandilands junction.

It later emerged TfL had failed to share with an official enquiry into the crash a report into fatigue risk management on the tram network.

The transport body claims this was a human error, and investigators said the report would not have materially impacted their findings.

The Conservative motion to appoint an independent investigation into TfL’s conduct was supported by the Greens, the Brexit Alliance Group and the Liberal Democrat member, while the Labour group abstained from the vote.

Mayor of London Sadiq Khan responded to the claims at Mayor’s Question time and said: “I understand concerns around the British Transport Police investigation into Sandilands not yet being completed, but Transport for London has always co-operated fully with all of the investigating bodies.

“It has also apologised unreservedly and repeatedly for the human error which meant a single report, which was commissioned following a separate incident on the tram network, wasn’t immediately shared with the regulators.

“Once this problem had become clear, it was rectified. It also notified the investigating bodies of this separate incident as soon as it happened.

“TfL produced a report for its board in July 2018 explaining why the internal audit report was not issued to the external organisations investigating Sandilands immediately upon its completion.

“This report is available on the TfL website and can be found through a quick internet search. The TfL board report provides a full and adequate explanation.

“I am unclear what the point of a further investigation would be, particularly bear
ing in mind the RAIB (Rail Accident Investigation Branch) carried out a thorough investigation into Sandilands, including forming an independent view on the issue of fatigue management, and included a summary of TfL’s audit in its final investigation report.”

A TfL spokeswoman said: “We are committed to supporting all those affected by the tragedy at Sandilands in any way we can, and our attention is focused on preventing anything like this from ever happening again.

We have always cooperated fully with all of the investigating bodies following the tragedy at Sandilands.

“We have apologised unreservedly for the human error which meant a single report which was commissioned following a separate incident on the tram network wasn’t immediately shared with the regulators, and we rectified that error as soon as it was identified.”