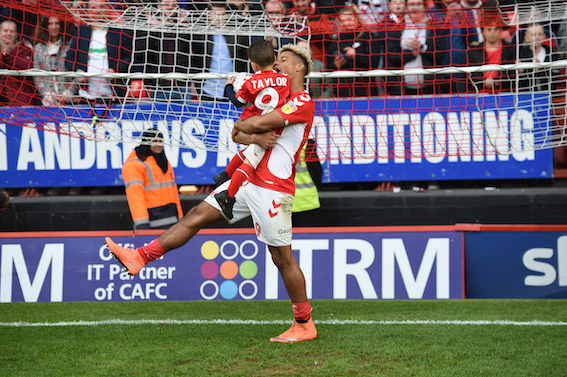 Lyle Taylor has provided more insight into why he chose Charlton Athletic in the summer instead of promotion rivals Sunderland.

The Black Cats were also chasing the striker – and there is a chance that the two clubs could meet at Wembley in the League One play-off final.

A lot of the talk at the time was that Taylor, 29, was a South London boy and that the lure of staying on home turf was central to his decision-making.

But the Valley fans’ favourite – who lifted the club’s Player of the Year award on Sunday – admits that there was more to it than that.

Taylor scored 55 goals in 150 matches for AFC Wimbledon – not counting a substantial haul of assists – before running down his deal. He told the South London Press: “I’ll give you a little insight into me. I was – if I’m honest – disappointed that I didn’t get the opportunity to go and play in the Championship at the start of this season.

“With what I did at Wimbledon, I didn’t think – and I still don’t think – people sat up and took enough notice of what I’d done. The same as I don’t think they will with Joe Pigott.

“It’s because of the stage you do it on – it’s not deemed to be big enough.

“So I was in a place where I was frustrated that people didn’t seem to rate the things I had done there.

“I thought for me to get to the Championship that I could go up to Sunderland, who are expected to win the league because of the size of their budget, or I could try and do something under somebody [Lee Bowyer] who I knew would back me to the hilt.

“And I knew any word he would have to say about me, as long as I did my job, would change peoples’ perception about me.

“So I knew playing under Bow was the right thing to do. It was simply about him meeting me and whether he liked me – because of what he’d heard.

“Ultimately I’m not the person a lot of people think I am and say I am. So, I decided the best thing for me to do was come here.

“I’m already here. I’m already settled. I’m home. This is home for me. Then I don’t have to worry about the move, not being around my family – which for me is a big thing – and it’s the familiarity of being born in Greenwich, raised in New Cross and being 15 minutes from the doorstep of the house I was brought up in.

“Added to the fact it was Lee Bowyer as the manager. So it was kind of a concoction of things.”

Taylor netted 18 times for Wimbledon in all competitions last season.

His current tally of 24 is his best in English football. The former Millwall youngster got 29 for Falkirk in 2012-13.

Taylor explained: “I looked at Charlton as if to say: ‘I think we could get promoted at Charlton. I think if I’d scored the goals I scored last year for this team then it could possibly have got them promoted’.

“Obviously added to that we had Karlan [Grant]. [Joe] Aribo as well. You look at the players who have come on this year. If last year’s team had these players – in their current form and condition – that team would probably have got promoted.

“The Scottish Championship doesn’t count for me. No disrespect to the league, but you are playing against some part-time clubs.

“I backed myself to score goals in this Charlton team with the way they play.

“I knew, as any centre-forward knows, if you score goals then people look at you. And I knew I’d score goals here.

“Really and truly it is a win-win for me being here. I have scored goals, as I expected to, and this team has been successful. But we do need to finish that off.”

But he admits he would swap his spot on the scoresheet if it means Charlton going all the way this May.

“I go out expecting to get chances in this team and I expect to make chances,” said Taylor. “How we do it I don’t care. I just want to do it.

“First it’s two games against Doncaster, who are a good team and deserve to be in the play-offs.

“So, it has to be a continuation of what we’ve done recently. And if we do that, and play to our potential, then I don’t think there is anyone who can stop us.”

“This club needs and deserves to be in the Championship at the very least. So we’ve got a job to do in just under the next three weeks to put this club back where it should be.

“It would mean we did something impossible under the current circumstances and the stewardship of this club.”

The drama of the play-offs is usually compelling viewing.

Not that Taylor tends to watch them.

He grew up as as Arsenal fan – “simply because of Thierry Henry” – but admitted: “I don’t watch football or have anything to do with it [away from playing].

“I’m not interested in watching it. I don’t play FIFA.

“There are a lot of players more like that now. The problem is that 15 years ago there were just football games on a Saturday and Monday night. But now you can watch football – that can be the U9 team from Timbuktu – on the internet. It’s too much. You don’t need that coverage.

“But because of the amount of money the sponsors and networks are putting in then you see every game on there.

“I’d rather watch golf, a box-set or Formula 1.

“I play golf. With Formula 1, I love the way Lewis Hamilton is. He has taken the rule-book, torn it up and shoved it down peoples’ throats.

“They say that racing drivers have to do this, they have to be prepared, they have to get this many hours sleep – Lewis Hamilton jets across the world going to fashion shows and parties but is still the best driver on the planet.

“People say to me: “Lyle, you’re a breath of fresh air – you’re so different to this person or that person’. I’m me. Why do I want to be like him or her?

Charlton Athletic take on Doncaster Rovers at The Valley in the League One play-off semi-finals on Friday May 17th at 7.45pm. Tickets start at £18 and can be purchased from https://booking.cafc.co.uk or 03432 081496.

BY ROB SUTHERLAND Crystal Palace secured their first win of the year with a dominant performance at Selhurst Park, as