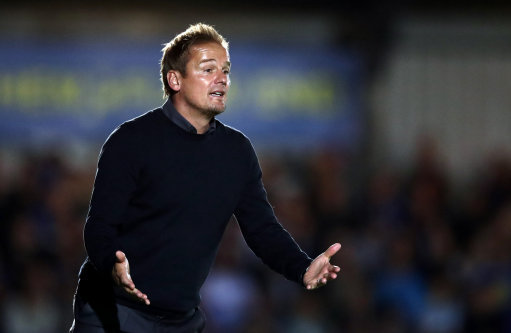 Goals at either end of the game ensured Neal Ardley’s AFC Wimbledon had a fruitless trip to Blackpool, as they recorded a seventh defeat in eight games.
Curtis Tilt and Mark Bola scored the goals seven minutes from kick-off and seven minutes from the final whistle to give former Blackburn boss Gary Bowyer’s side victory on home soil.
The scoreline also means the Dons have hit the net just three times in their last seven games – though this is the first time they have been more than a single strike adrift at the end of those seven losses.
Harry Pritchard gave them an early warning when his header crashed against the woodwork and the ball was scrambled away for a corner. Jay Spearing’s pinpoint delivery to the danger zone at the back post it actually seemed to go straight in but Tilt claimed a contact before it crossed the line.
Blackpool keeper Mark Howard had to save a Kwesi Appiah drive at the other end, but the visitors had to go in a goal down at the break.
In the second half, Jake Jervis headed over and Bola’s precise challenge blocked another Jervis attempt.
Ardley’s side thought they should have had a chance to get back into the game when Tilt seemed to handle in the area under pressure from James Hanson, but referee Anthony Backhouse waved play on.
But Bola fired accurately into the bottom corner to seal the result late on.