Tony Bassett broke the story of a family who found refugees clinging to the bottom of their hired motorhome after they had driven back from Calais to the UK.

Peter Cole dropped the motorhome back with the rental company when the extra load was discovered. 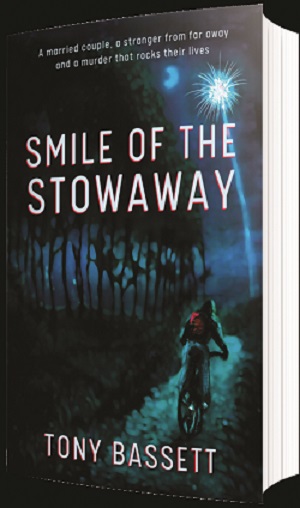 The Cole family reported the stowaways to border control and that was they last they saw of the refugees.

Tony, of Upper Belvedere, sold this story to the national papers, but it sparked an idea.

Tony said: “What if the family had taken the refugees in and not reported them?

It’s illegal to do this, but there must be some incidents out there where this happened.”

From this idea he wrote The Smile of the Stowaway, published by Conrad press.

The 68-year-old said: “The family takes the refugee in.

Everything seems to be alright, then the stowaway is accused of murder in the village.

“I thought it would bring forward some of the big issues that the country is coming to terms with at the moment.

“It’s a risky subject and I don’t want Nigel Farage coming to knock down my door.

I think it is an important subject though.”

The novel will be published on December 1 and is available to order on www.theconradpress.com

One thought on “Leisure: Tony Bassett’s new book ‘Smile of the Stowaway’”