Lee Bowyer wants Charlton Athletic fans to pack out The Valley for their play-off semi-final decider against Doncaster Rovers.

The Addicks finished third in League One and now face the Yorkshire side on Sunday in the first leg. The return fixture takes place in SE7 on May 17.

Portsmouth and Sunderland clash in the other tie.

More than 15,000 home tickets have already been sold for the match at The Valley.

Bowyer said: “The fans are going to play a massive part, especially having the second leg at home.

“Depending on the result up there, we want to try and get as many there [at The Valley] as possible and as loud as possible.

“We’ve got to make the Valley really intimidating. That’s what happened when we played away at Sunderland and Portsmouth – they pack their stadiums out and it is intimidating.

“Our fans have been great all season anyway, it is just this final push now to get to Wembley. If they can come out and support like they have done, that’s all we’re asking really.”

Igor Vetokele missed Saturday’s 4-0 thrashing of Rochdale due to a thigh injury. But Bowyer is hopeful the striker will return for the game at  the Keepmoat Stadium. Krystian Bielik sported an ice pack on his right leg as the Addicks players did a lap of appreciation at full-time, a late challenge by Calvin Andrew forcing him off. 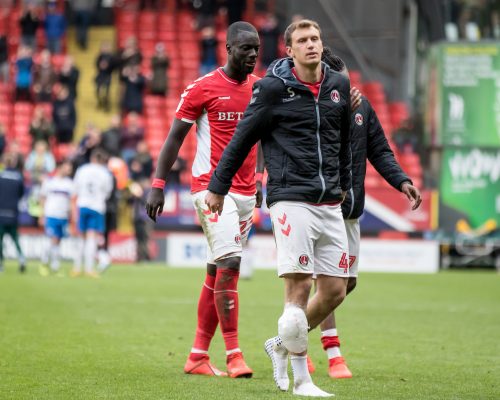 “Krystian got a bang on the leg but he’ll be fine,” said Bowyer. “We brought Lyle [Taylor] and Joe [Aribo] off, but that was more a precaution than anything else.”

Jonny Williams (ankle) is facing a race to be fit for the first leg. Bowyer said: “The extra day before we play could make the difference.”