Lee Bowyer has described Jake Forster-Caskey’s first action of the season as a “bonus” – but spelled out the Charlton Athletic midfielder is not ready to be plunged deeper into the club’s promotion push just yet.

The 24-year-old suffered cruciate knee ligament damage in the final training session before the League One opener against Sunderland.

Forster-Caskey replaced Joe Aribo for the final 11 minutes in Monday’s 4-0 win over Scunthorpe United. His last competitive match had been the League One play-off defeat at Shrewsbury Town in May last year.

The midfielder was only promoted to the matchday 18 after Krystian Bielik pulled out of the Charlton team late on with a shoulder niggle.

“It’s a bonus for Jake because of what happened with Krystian,” said Bowyer. “I wasn’t even going to put anyone else on the bench and then thought ‘why not put Jake on?’. They had all trained Monday morning, the lads not in the squad. Jake had trained. 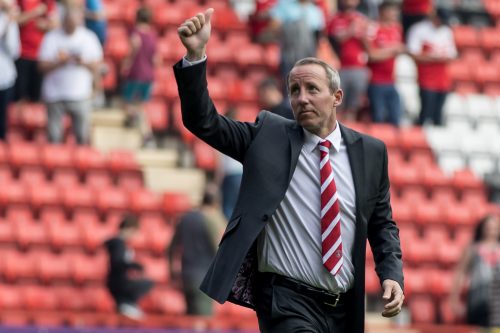 “If we were in a situation where we could maybe put him on in the last 10 minutes it would be great for him as a little boost – because he has worked so hard since pre-season to get back to this stage.

“We might need him at some stage. It’s great to get him back out there and be amongst it. Jake is not ready yet. But 10 minutes – when we were winning the way we were – is perfect for him.”

Bowyer is clear on the target for his team after their automatic promotion hopes were finally killed off by a loss to Oxford on Friday.

“We can only control what we are doing. We’ve scored seven goals in our last two home games.

“We’re a very good side. If we get a bit of luck and keep our main players fit so that we have got a full squad then I think we’ve got a chance against anybody.

“There is not one team I think ‘I don’t really want to play them’.”