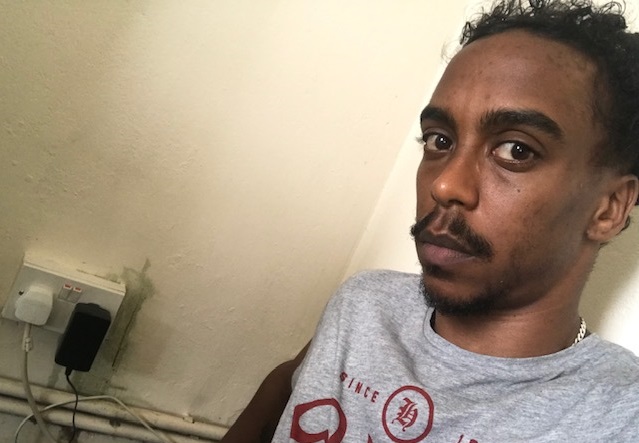 A tenant has come up against his housing association when trying to get his leaky ceiling and floor fixed.

Phillip Bowak has lived in a flat opposite the Kennington Oval for the past seven years. But his floor is made of tiles which, he claims, cut the feet of him and his two-year-old daughter. He also says his roof leaks in two places every time it rains, damaging the flat’s electrics.

But he says getting things fixed is not so simple. His building is managed by the housing association Hyde Group which, he says, does not help when he needs it.

He said: “I have reported things many times. At first when it was minor, they ignored or diverted me. They pretended I was either not in and it was cancelled, or that they had completed it.

“Many times they attended appointments while I’m at work, when I told them I would be beforehand.

“They leave you in the dark and don’t phone you back to give updates.

Every time you speak to another person on the end of the phone line. It’s another person who doesn’t know anything and the records are not clear for them to fully understand the problem.”

Mr Bowak has managed to get contractors and surveyors to look at his flat several times, but he says the housing association does not acknowledge all of their visits.

One of the agents told Mr Bowak that he would try to get things changed for him.

“They didn’t get back to me after about a week-and-a-half,” he said. “I phoned them, I said ‘A surveyor came round my house and determined that it’s really, really bad. What are you going to do about this flooring?

“They said to me ‘No, he hasn’t said that. He’s told us that it’s in perfect condition, and you don’t need any flooring. I said ‘That’s wrong’. Now I’m not sure what to do.”

The tiled floor in the living room has not been replaced since the building was built in the 1970s, says Mr Bowak, who also cannot adjust most of his radiators without pliers, since the temperature knobs fell off.

He says if he were a private tenant, things would be treated differently and fixed already: “There has been a lot denying jobs, a lot of denying responsibility.”

Mark Batchelor, director of property services at the Hyde Group, said: “Over the last few months we have attended Mr Bowak’s home and while we have been able to carry out some bathroom repairs, we have twice been denied access so have not been able to resolve all his raised issues.

“We have a clear complaint procedure and we monitor performance closely. We would encourage Mr Bowak to contact us directly to discuss any concerns he has.”

He also denied claims that the company runs a two-tier service. “The service we offer is based upon the contract we hold with each householder. We are responsible for the repairs within tenants’ homes and communal areas where we own the building, but we do not carry out repairs within the homes of private tenants or leaseholders.”

Tenants of housing associations are entitled to repair their homes and take costs from their rent, but most are not aware of this. Housing and homelessness charity Shelter offers a guide on how to do so.

Chief executive of Shelter, Polly Neate, said: “While many social renters are happy in their homes, there is still a large minority who feel their landlord is indifferent to their needs. And we know that social tenants are more likely than those in private renting to have issues left unresolved.

“Social housing is not like choosing a doctor – you cannot just up sticks and move if your housing association doesn’t see to disrepair or ignores your concerns. We need to hold failing social landlords to account in the same way as other public services.

“Much more is needed to put the protection of social tenants first, and to give them a stronger voice in what matters to them.”