Kwesi Appiah reckons there have been plenty of positive signs for AFC Wimbledon in the opening month of the League One season – but now results need to come.

The timing would not be sweeter if that started tomorrow at Milton Keynes with the bitter back story between the two clubs.

The Dons’ first two points have come in home draws against Accrington and Wycombe. There have also been tricky away assignments at promotion favourites Ipswich and Sunderland.

“Some of the teams we have faced are expected to be challenging at the top end of the table,” said former Crystal Palace forward Appiah. “It was important for us to gain some confidence from those matches, even though we didn’t get the results we wanted.

“It was about knowing we can mix it with sides who will be up there. We were most definitely disappointed not to get a result at Ipswich because they scored in the 94th minute and we were leading that game for a long period.

“We were definitely still in the Sunderland game at half-time. They had dominated but if things had worked out a little differently we could have come away with something.

“Going forward we have got to start picking up points – two points is not great. That is what we’ll be looking to do on Saturday.”

Wimbledon needed a transformation under Wally Downes  in the second half of the 2018-19 campaign to just about squeeze to safety on the final day. 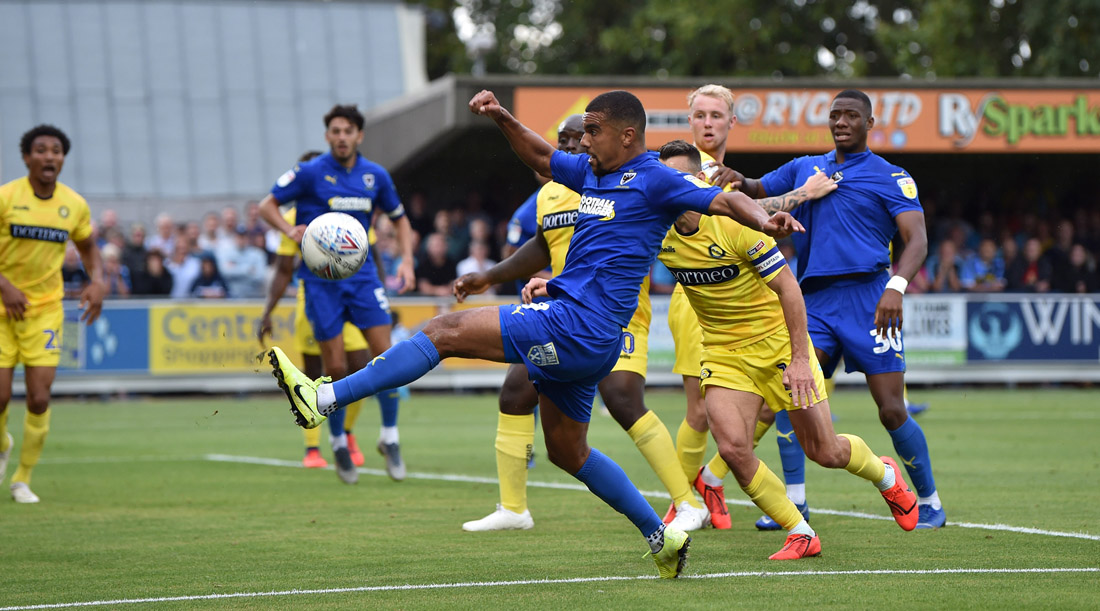 “I’d like to think it won’t be a battle again,” said Appiah. “Our plans are to stay well away from that – pick up as many points as we can until the midway stage of the season. Then it is about figuring out what we are fighting for – the middle of the table, top of the table or the bottom of the table. It’s a bit too early to say. We want to be a team that’s in the middle but we’ve got to get the points to prove that’s where we deserve to be.

“There is great importance on this next game. If we can get the win then  that makes it one hell of a weekend. It is massive for us.”

The Dons were busy on the final day of the loan window as they brought in three players. Brentford’s Marcus Forss has added another frontline option.

Appiah, who has netted twice in the opening six matches, said: “Clubs are always going to try to make additions to the squad in the transfer window to improve the team, I’m sure the manager will feel he has done that.

“I don’t know too much about the new lads. I hope they come in and help the team all pull in the same direction.

“Having competition in a squad gives people that bit more of an edge. It should ensure everyone is at their own game. I hope it gives everyone a boost.

“I feel like I have done well. I’ve scored two goals and not had many chances, so my conversion rate is quite good. It’s just unfortunate those goals haven’t got us in some points, that’s the disappointment.

“The formation we play means it is down to the striker to create chances and that is proving difficult at the moment because we are playing teams who are dominating the ball for most parts of the game.”

The 29-year-old has scored nine goals in 30 starts in League One since signing on a free transfer from Viking in the summer of 2017. Appiah is contracted to Wimbledon until the end of June.

“That is the situation – I can’t do much about that right now,” he said. “I need to focus on what I do on the pitch. If I have a good season it makes it a lot easier going into the summer. Playing games can only help put you in a better position. If you do well for the team, and the team does well, that makes it more likely you will get a new contract or go somewhere else.

“I can’t read too much into it. I’ve got to focus on the job in hand – that other stuff is too far down the line.”