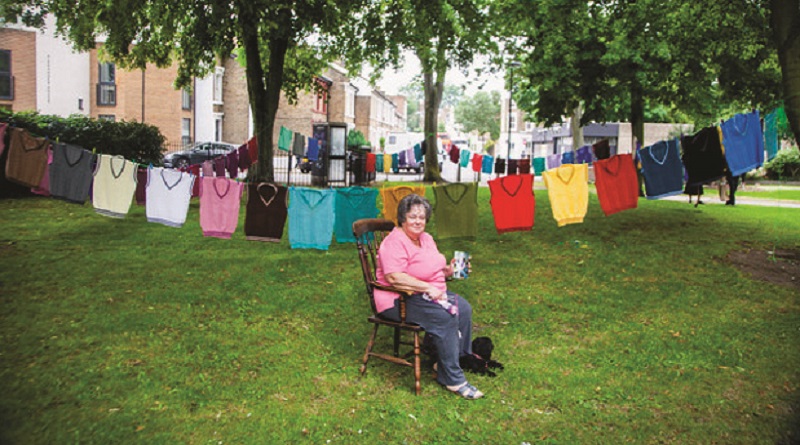 There’s no bigger labour of love than knitting for someone.

Grannies might produce beautiful pastel booties and bonnets for their
grandchildren – and mums (and some dads) knit scarves for their children.

But devoted Jean Brewer, loved her older brother Michael so much, she knitted him more than 90 jumpers.

And Jean, from Herne Hill stuck to the same knitting pattern that she found in the high street department store Woolworths in the 1980s.

She said: “Michael liked everything to match. He loved the first one I made for him so much we just stuck with the same one. In the end, I could knit it blindfolded.”

The tradition began when Michael couldn’t find the right jumper.

Jean said: “Michael was well dressed but he often couldn’t find the colour of knitwear he wanted. If he saw wool he liked, we’d buy it and I’d get knitting.

“Over the years, I knitted one in almost every colour from pink, through turquoise, to white, but I did knit him black, grey, beige and navy blue too.

“Michael loved bright colours like orange, he loved his clothes, and he loved them to match.

“He wore the jumpers all the time, either with a shirt and tie when he went out, or a polo shirt if he was indoors.”

They took about three weeks from start to finish, with Jean knitting in the evenings, after work, in front of the television.

“I can’t just sit in front of the telly doing nothing,” she said. “I get fidgety.”

A few are plain, but most have a contrasting stripe around the neck, armholes and two above the bottom ribbing. Down the front, they have six rows of cable running from the shoulder and neck, to the bottom rib.

Jean, 69, and Michael, who died last year age 71, suffering from gastric cancer and Parkinson’s Disease, lived together with their parents for their whole lives.

For nearly 40 years, Michael worked as a postman, while Jean worked for the retailer C&A; first as a showroom assistant age 15, in Brixton, before moving to Marble Arch age 32.

She was eventually promoted to payroll supervisor at head office there, and she worked until C&A closed in 2001.

She took redundancy and her pension, and nursed her mother, who died
18-months later.

Michael and Jean were born and the family lived their whole lives in South-east London, while their grandparents were almost next door.

“We were a really close family,” she said. “We just got on really well.”

Neither Jean nor Michael married. Jean said: “People thought we were
married, because we were always together.

“Michael was a nice chap. Very kind to people, like my dad; everybody liked him. He was wonderful, really easy going and we never really argued about anything.

We might have had our off days, but we mucked in as a family. We were all very close.

“I was devastated when Michael was diagnosed with Parkinson’s a month before we lost mum in 2002. Dad had died in 1984.

“After Michael was diagnosed, I nursed and cared for him until the end.”

Jean doesn’t remember where she first learned to knit. “It was just something I picked up,” she said. But she knits for friends too.

“When I was at C&A, one of my colleagues was expecting twins so I knitted shawls for her babies, and I knit my own cardigans as well as cardigans for friends. I like doing it. It is never a chore.”

There are always vintage clothing stores or the Salvation Army, but one thing is for sure, the next owners will have wonderful sweaters from a truly unique collection.