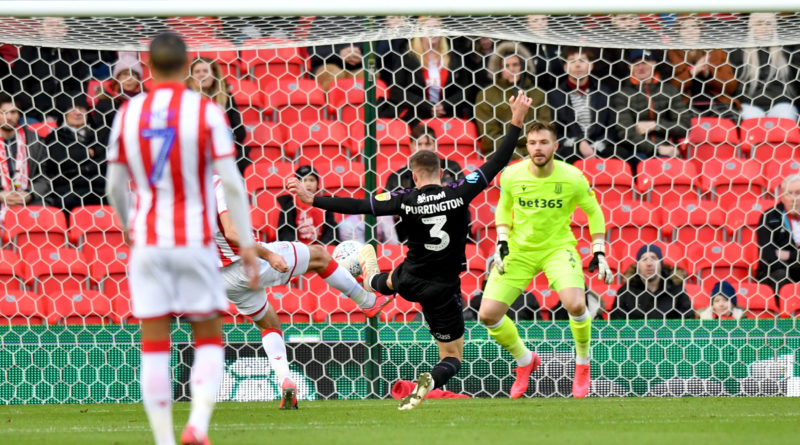 Charlton’s chronic weakness away from home is seriously undermining their fight to stay in the Championship.

Their last victory on the road dates as far back as August 31 (2-0 at Reading), since when they have failed to win any of 12 league games.

Their miserable record, punctuated by a smattering of creditable draws, has eroded the cushion which protected them from the dreaded basement and has plunged them headlong into a desperate, dog-eat-dog battle to survive.

This thoroughly dispiriting defeat by fellow strugglers Stoke City, who vaulted above them in the table, trod a depressing, well-trod path.

Forced on to the back foot from kick-off by mediocre opponents who justifiably regarded them as soft touches, they adopted their customary wait-and-see passivity and camped in their own half.

The Potters were no great shakes themselves but sensed a golden opportunity to relieve the pressure they’ve been under recently.

As far as they were concerned, this so-called six-pointer was a mere gimme. Following nearly a half hour of one-way traffic, they moved into an entirely predictable lead, helped, it must be said, by Charlton’s usual chaotic defending.

Making his debut, Birmingham City loanee David Davis arrived with a reputation as a hard-nosed competitor willing to put his foot in and suffer for the cause. Possibly a little rusty, his midfield challenge on Joe Allen was late, crude and worthy of the booking meted out to him by referee Jarred Gillett.

City duly fitted punishment to crime as Sam Clucas’ free-kick was headed back across goal by Nick Powell and tapped home by James McClean from four yards.

The scorer added insult to injury by giving back a little of the kneejerk abuse he’d been receiving from a minority of Charlton’s impressive away following of 1,934 – er, loyalists.

Out of sorts, out of touch and collectively out to lunch, the Addicks blundered through what remained of the first half.

Their hosts seemed satisfied with their lead and were hardly threatened by despondent visitors apparently incapable of stringing two accurate passes together. All of which made more improbable the equaliser City conceded in the first of two added first-half minutes.

An out-of-context one-two exchange between Andre Green and Josh Cullen made space for Green to deliver a cleverly curled cross from the right. Sliding in tandem with Tommy Smith, Ben Purrington was originally considered to be the scorer of Charlton’s unlikely equaliser but closer examination identified Smith as the own goal fall guy.

We’re happy to go along with Purrington’s none too convincing claim to the decisive touch. It’s safe to assume that Smith won’t dispute his version of events.

If the Addicks were galvanised by their well-timed success, they were at immediate pains to squander the advantage it gave them.

After kicking off the second period, they fell behind again within two minutes. Promptly forming up in their default position just outside the penalty area, they were static onlookers as Allen picked up a scruffy clearance and slid Tom Ince in behind their outwitted ranks. Played onside by Tom Lockyer, Ince finished neatly past the advancing Dillon Phillips.

With almost the entire second half remaining, Charlton were already doomed. Stoke were subjected to none of the almost unbearable pressure Barnsley had inflicted on the Addicks a week earlier, which reduced them to error-riddled wrecks praying for the final whistle.

In sharp contrast, the Potters strolled through their work, thoughtfully adding a third goal midway through the half to remove any doubt over the outcome.

Torn apart by the pace and power of a passing movement on the right flank, the visitors were helpless to cut out the hard low cross delivered by Smith or the clinical touch applied by Powell which turned it past Phillips.

Stoke had neatly reversed the scoreline by which the Addicks beat them at The Valley in early August but then, of course, Lee Bowyer’s men were a livewire outfit unencumbered by either doubt or apprehension.

During their irresistible start to the season, Charlton shared a 1-1 home draw with Nottingham Forest, displaying grit and character to cling on to a point under severe pressure. Tonight they travel to Forest’s City Ground. You have to fear for them. And pray that Wigan, Barnsley and Luton continue to be just as vulnerable.