BY KEVIN NOLAN AT CRAVEN COTTAGE

This pulsating local derby -so local that Charlton fans spent almost the whole day on the road due to travel complications – had it all.

It set pulses racing, caused blood pressures to spiral dangerously and tore nerves to shreds. And when it was over, honours were even and the points shared. Quite right too, even though Fulham boasted a 70-30 superiority in possession and battered their visitors in a one-sided second half.

When referee Keith Stroud’s final whistle ended a punishing ordeal, the roar of relief released by nearly 2,000 travel-stained pilgrims in the away end rewarded their heroes for standing up heroically to an almost non-stop onslaught. 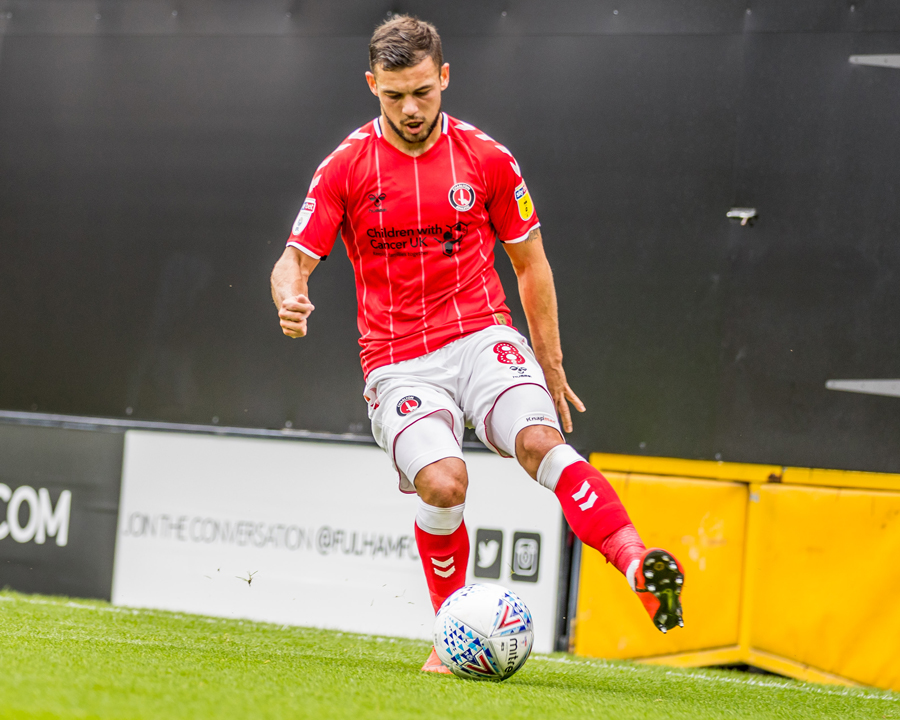 Just seconds earlier, it had seemed they were doomed to disappontment as brilliant substitute Bobby Decordova-Reid connected powerfully from point-blank range. But Fulham’s celebrations died in their throats as Dillon Phillips crowned a man-of-the-match display by hurtling across his goal-line to miraculously keep the ball out.

Phillips was magnificent but so too was each and every one of his colleagues. 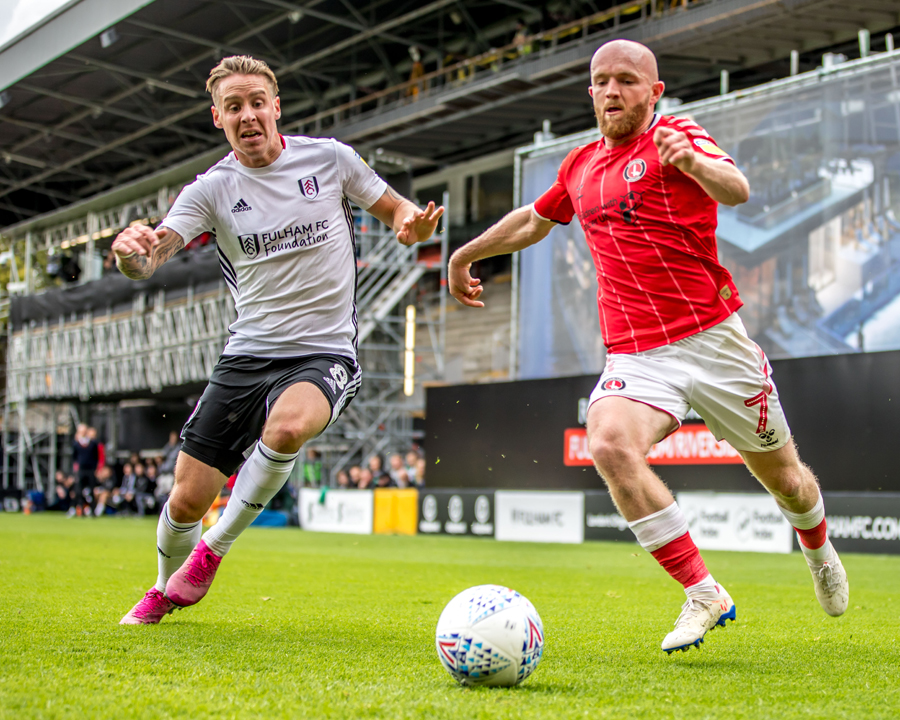 “I love them, they are a great bunch,” was Lee Bowyer’s touchingly sentimental tribute. His love, it’s safe to say, is fully requited and felt by more than few equally besotted fans.

The majority of the second period was, admittedly, one-way traffic, but Charlton’s first-half performance was composed and thoughtful. 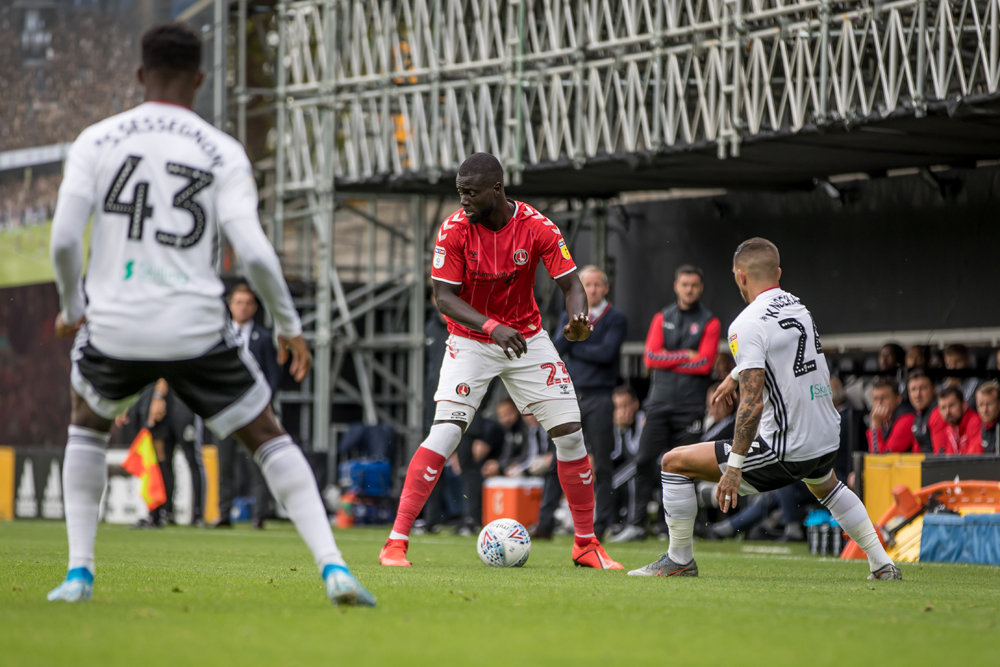 They set out in a fluid formation (possibly best described as 3-4-2-1) with wing-backs Chris Solly and Jake Forster-Caskey eager to push forward and with a vastly-improved Macauley Bonne operating as a gritty lone striker supported by the intelligent running of Johhny Williams and Conor Gallagher.

With outstanding veteran Darren Pratley stifling Fulham’s heartbeat Tom Cairney, Bowyer edged the early tactical battle with fellow Sparrows Lane graduate Scott Parker and the Addicks were good value for the lead they took in with them at half-time. 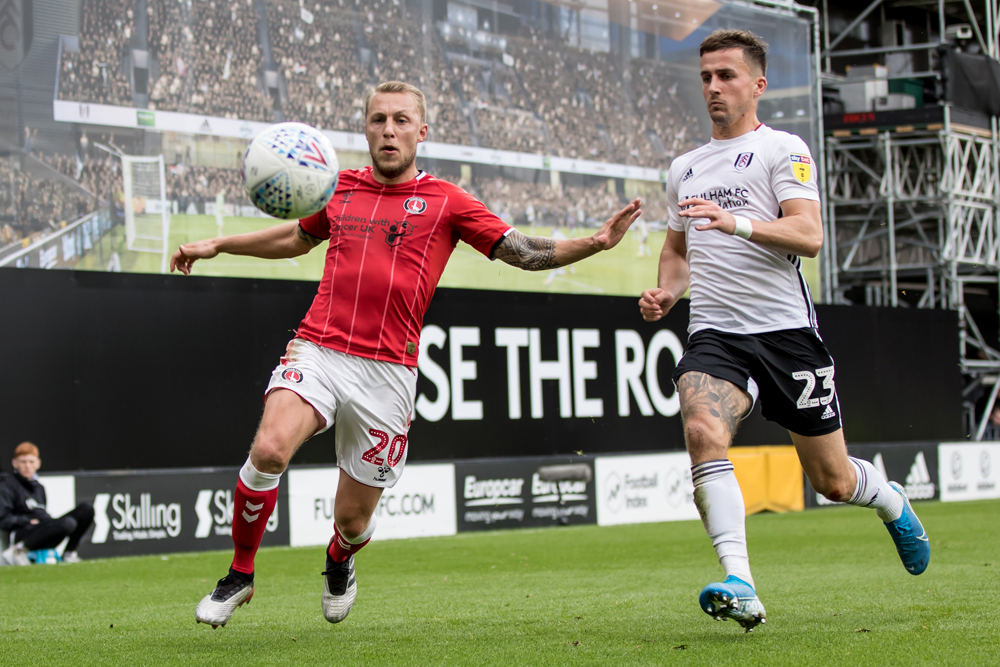 It was Pratley’s header from Williams’ free-kick which forced the first save from Marcus Bettinelli, the keeper performing more spectacularly later when Williams let fly on the run. 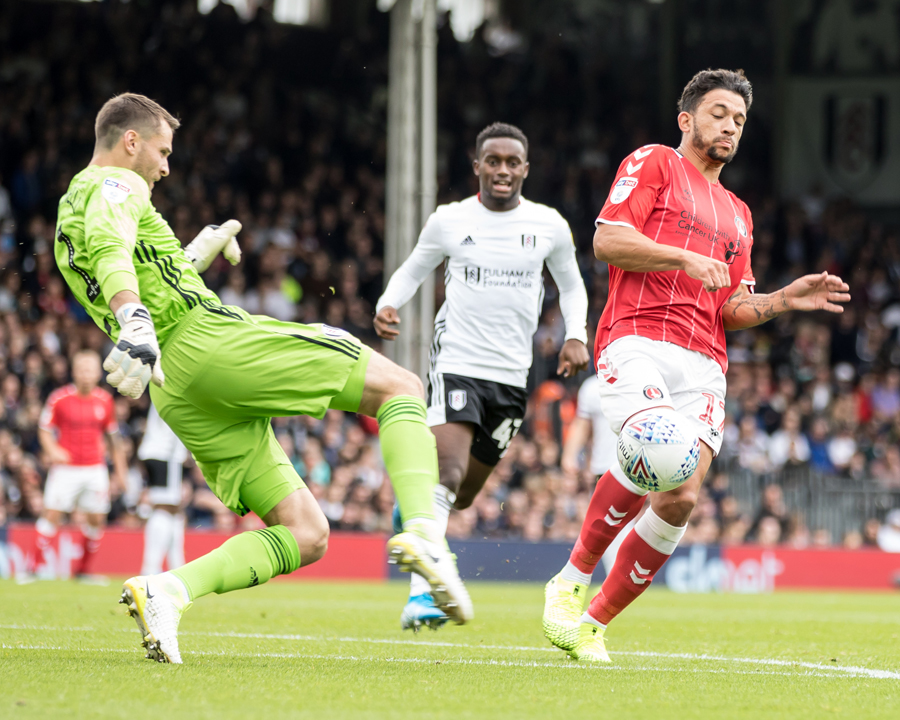 A sly trip on Pearce, unnoticed by referee Keith Stroud, was the belligerent Mitrovic’s major contribution before the interval but he proved a rare handful after the break. The powerful Serb
rode a tight disciplinary line but gave as good as he got in a no-quarter duel with Pearce during which, according to Fulham’s official version, he “overpowered and bullied” his rival. That pithy synopsis escaped the notice of most fully-sighted observers, at least the ones who were watching in the same time zone. 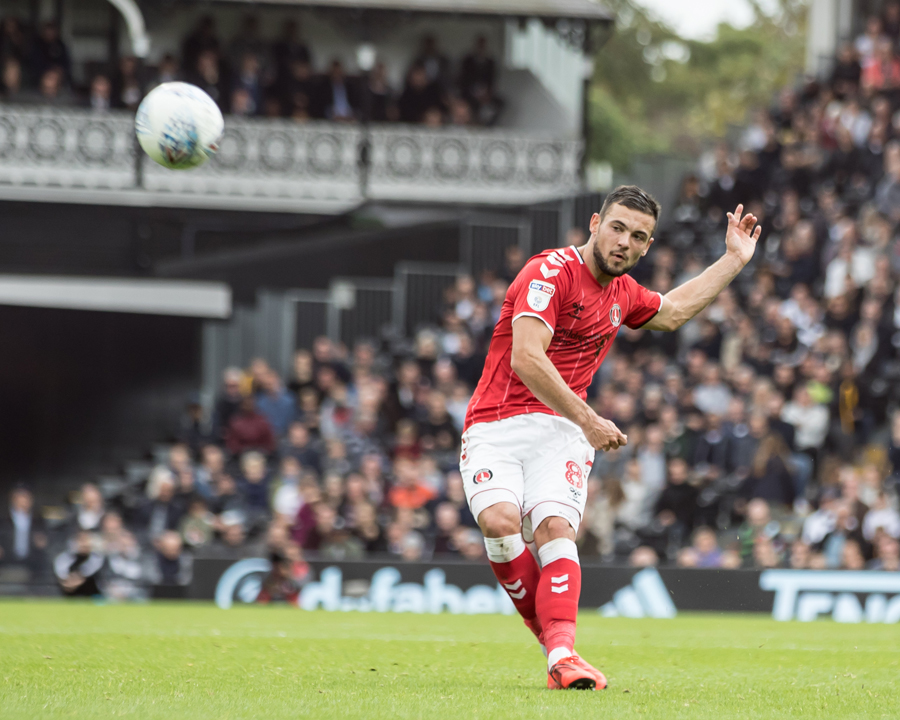 Four minutes before the break, the wonderfully talented Gallagher gave his side a lead which by no means flattered them. Picking up Bonne’s clever flick-on, he found Forster-Caskey running wide of him on the left touchline, then turning infield to cross beyond the far post where Solly materialised unmarked. The full-back’s savvy header was crisply half-volleyed from the penalty spot past Bettinelli by the ever-restless Gallagher to complete a marvellous team goal.

Parker’s response to the unpromising situation was decisive. His brother-in-law Harry Arter and Steven Sessegnon were replaced during the interval by Harrison Reed and the instantly menacing Decordova-Reid. 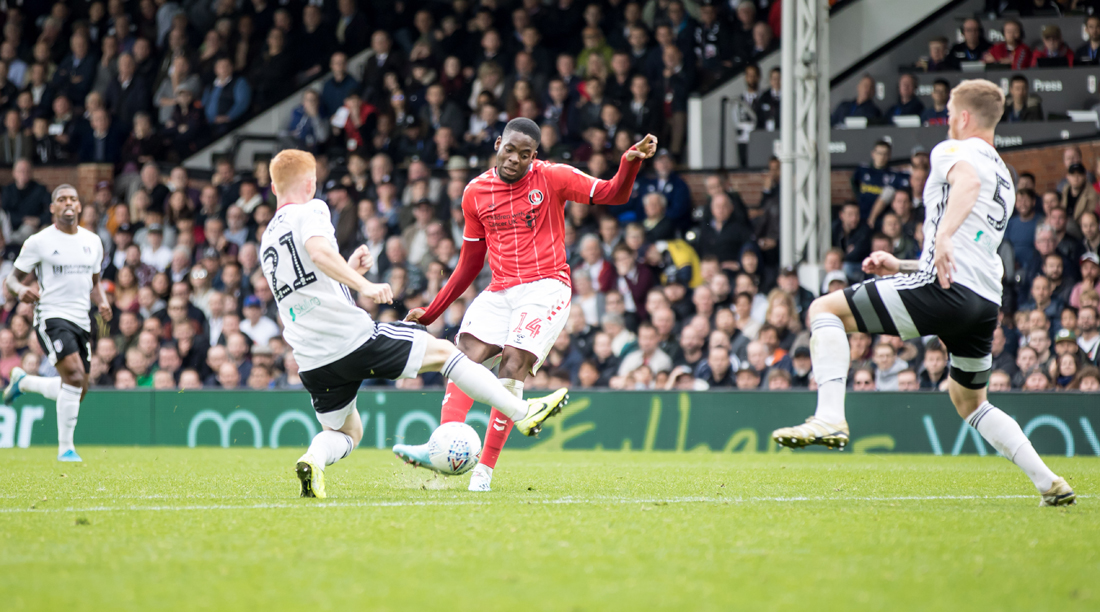 The latter made a prompt contribution, his  sharp exchange of passes enabling Cavaleiro, switched from left to right flank, to outmanouevre Sarr and beat Phillips comprehensively with a superb drive into the top-right corner.

The 55th-minute leveller looked ominous for the visitors but they reacted positively.

A right-wing corner from Josh Cullen, another of Bowyer’s bonny battlers, was half-cleared but recycled by Williams to Pratley on the left. Stepping inside, the streetwise old-timer floated over a delicious cross which Bonne, stealing a yard on sleepy marker Mitrovic, glanced over Bettinelli and neatly under the bar. 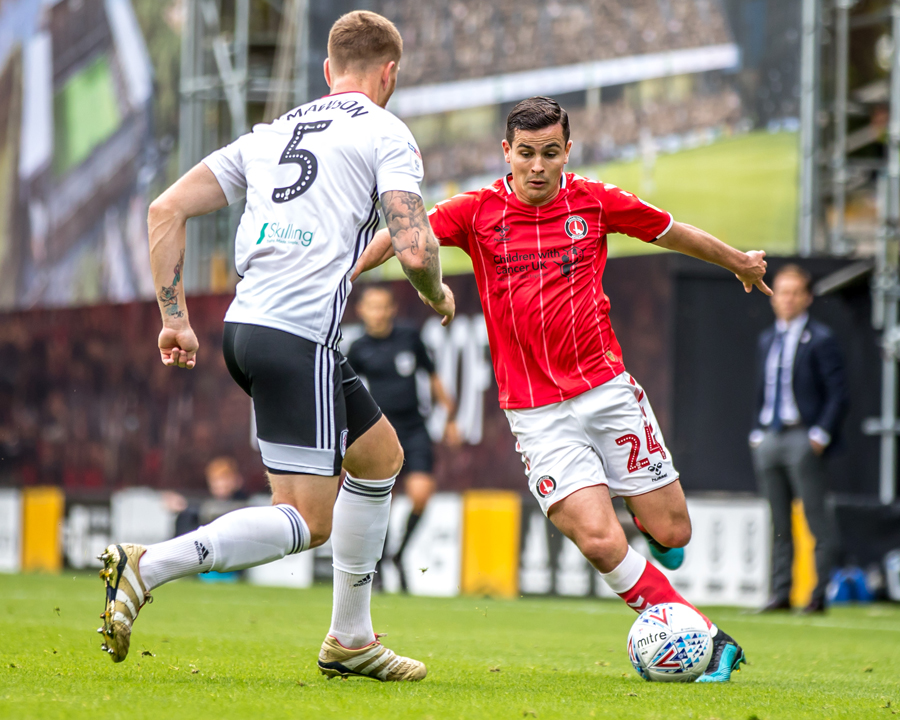 Stung by the indignity of it all, the Whites turned up the heat on their uppity visitors.

A swooping cross from Joe Bryan deceived Phillips but rebounded off the bar.

A minute later, Mitrovic smashed Anthony Knockaert’s cutback against the same woodwork before coming up with a controversial second equaliser just past the hour mark.

Clearly an offside onlooker ahead of the action as Cairney’s diving header from Bryan’s centre was bravely stopped by Phillips, he stepped back “onside” to bash the rebound past the fallen keeper. Both Stroud and his assistant turned a blind eye. 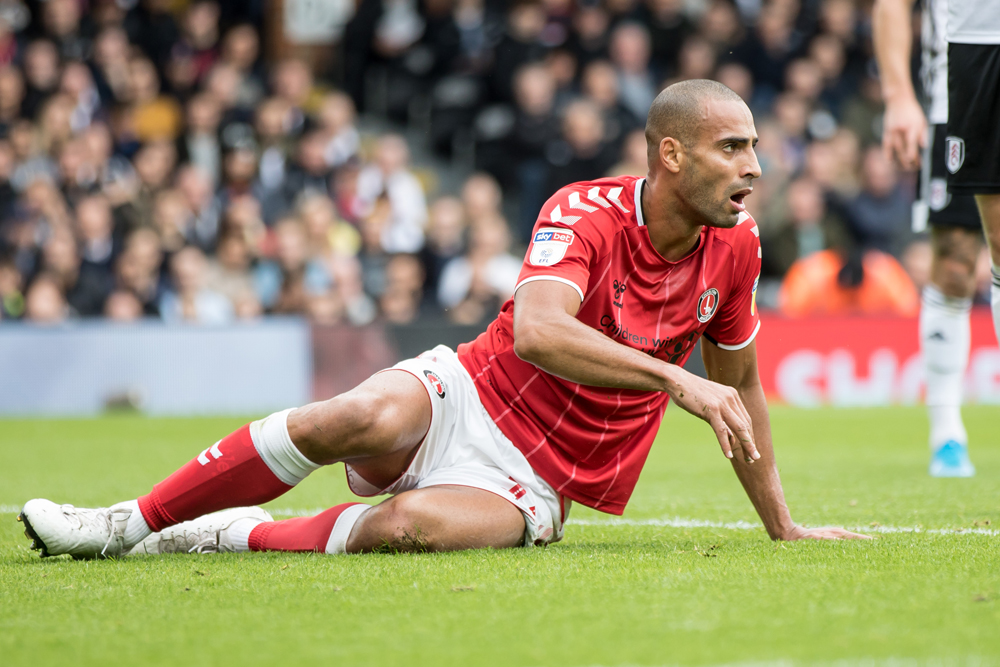 Apart from a deflected effort from Jonathan Leko, to which Bettinelli reacted athletically, the rest of this upriver-downriver Thames derby descended into a duel between Parker’s galvanised flyers and a divinely inspired Phillips, with Decordova-Reid his unfortunate victim. Two spectacular saves to deny the newly posh double-barrelled winger provided the perfect lead-up to the quite stupendous block on the goal-line in added time which preserved for the Addicks the point they richly deserved.

Fortune favours the brave, they say, and they don’t come any braver than Pearce and his indomitable mates.