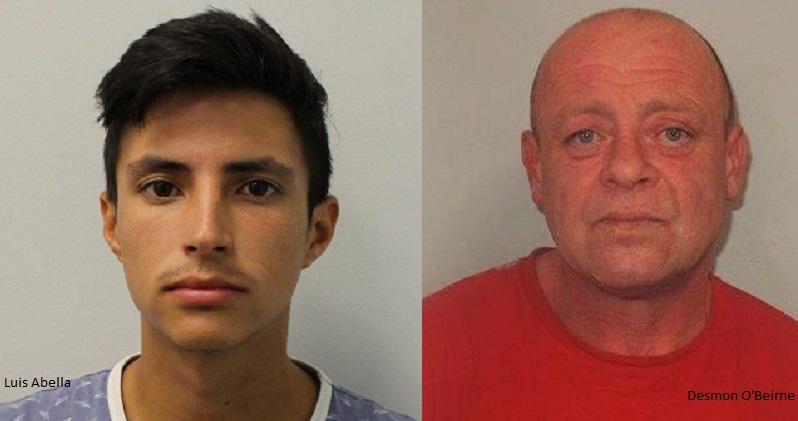 Two men who attacked a 51-year-old in Trafalgar Square have been sentenced for their parts in his death.

Luis Abella, 22, of Marshall Court, Stockwell had previously pleaded guilty to attempting to cause actual bodily harm and was sentenced to three months’ imprisonment, suspended for two years.

Lucas Antunes, 22 of no fixed address – extradited from the US to face justice – was jailed for three years and nine months at the Old Bailey on Friday, having previously admitted manslaughter.

Victim Desmond O’Beirne, who lived in Pimlico, had been out for the night and fallen asleep on a grass area outside the National Gallery in Trafalgar Square.

After waking up, he approached several people, including Antunes and Abella, who took exception and pursued and attacked him at around 12.25am on Saturday, June 3, 2017.

The London Ambulance Service treated O’Beirne at the scene before taking him to hospital, but he died from his injuries on Wednesday, December 20, 2017.

A post-mortem examination at Westminster Mortuary on January 3, 2018 determined cause of death as a head injury.

Antunes fled to the US after the incident.

Thanks to close liaison with the US authorities, he was traced, detained and extradited back to the UK in September 2018.

He was charged with manslaughter on September 27. Detective Chief Inspector Noel McHugh, who led the investigation, said: “Desmond was a completely harmless individual who had gone out that night for a beer and should have quietly gone back home again.

However, Abella and Antunes delivered a mindless and pointless attack, punching him in the back of the head and kicking him while he was on the ground.

He suffered injuries that put him in a coma for six months. He never stood a chance.

“The support of the media and the public has been instrumental in gaining justice for Desmond’s family – a witness come forward following our appeals and identified both suspects.

“I am so proud of my detectives for their outstanding work, and the US Marshalls who were truly exceptional in securing Antunes’ return from the US and helping ensure he faced justice.

This case really does show what can be achieved when people come together to help solve crime.”

O’Beirne’s sister, Vivienne Folan, described her civil engineer brother, who had a 19-year-old son, as: ‘a hard working, larger-than-life character’.

“It is extremely difficult for me to express the pain I felt when I had to watch CCTV footage of my brother being attacked from behind by two men – and then being left for dead,” she said.

“When I visited Desmond in hospital, he was unrecognisable to me, both visually and physically, because of his injuries from the attack.

It was so terribly painful for me to see him like this. “He was utterly helpless and unable to recognise or communicate with me in his vegetative state.

Desmond did not regain full consciousness and we never again had the opportunity to communicate with each other.

“Desmond’s life was needlessly cut short because of a mindless and cowardly attack by two men who showed no remorse and left my brother for dead.”