A former publican left destitute, along with his family, when he was ousted from his business, is gearing up to compete in a gruelling 156-mile ultra-marathon in the 120F heat of the African desert.

Julian Mellor, from Dulwich Village, plans to run the same distance as from London to Rotherham – but in Morocco – from  April 5-15.

The 47-year-old is urging people to show kindness by considering supporting his chosen charity, Walk Once More – the only UK charity funding research into a cure for spinal cord injuries.

Just registering for the 156-mile  34th Marathon Des Sables (MdS), where temperatures can soar past 120C, was a huge achievement in itself for the father-of-two from East Dulwich.

In 2014, the family lost the pub they ran together in Warehorne, Kent. This left them penniless and they were reduced to living in a halfway house in the north of England. “We had no heating and no lighting – it was desperate,” he said.

By this time, Julian, who is 5ft 5in tall, weighed in at 14 stone and was what he termed, “a functioning alcoholic.”

But soon after, Julian saw his friend Wayne struck and killed by a car in Todmorden, Yorkshire. Julian recalled: “The day Wayne died changed my life instantly, because I was the first person to go to him after he had been hit by the car and I was the very last person to touch him while his heart was still beating.”

In 2014 the family decided to try for a fresh start – they packed up their belongings and moved in with his mother-in-law in Dulwich.

He said: “I had lost my friend, my home and my livelihood and didn’t want to lose my wife, my life or my children. Running started something that I can only describe as lifesaving for me. It became my coping mechanism. I’m confident I’ll complete the MdS because it’s indicative of everything about me. I give 200 per cent of me to anything I do and I really want to help raise £10,000 for such an important charity.” 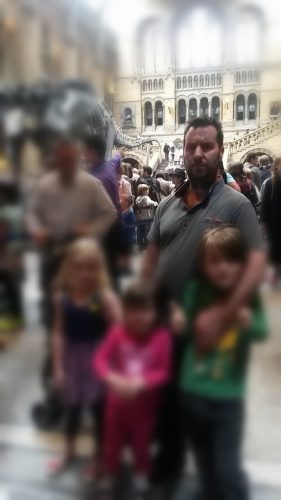 Julian hopes to raise funds and awareness for Walk Once More’s quest for a cure for spinal cord injury. A spokesman for the charity said: “Julian’s unwavering spirit is something many victims of such a debilitating injury must also rely upon, just to make it through each day.

“We firmly believe a cure for spine injuries is on the horizon, and we call on the dedication and selflessness of supporters to help make this a near-term reality.”

There are an estimated 60,000 people in the UK living with a spinal cord injury, according to the Wandsworth-based Back-Up Trust – and each year more than 2,000 people are newly injured.

To help Julian meet his fundraising target for Walk Once More, you can still sponsor him at https://www.justgiving.com/fundraising/julianmds