Jiri Skalak reckons he still has plenty more to show Millwall fans – admitting that a year on the sidelines has left him striving to get back to peak condition.

The 26-year-old Czech Republic international signed for the Lions at the start of August.

Skalak had been a long-term target for Millwall, who moved for the winger after failing to land Ben Marshall from Wolves.

Marshall, now at tomorrow’s opponents Norwich City, was an almost instant hit. But Skalak, born in the city of Pardubice which has a factory that manufactures Semtex, has been a slow burn.

He only featured in cup matches for Brighton last season following promotion to the Premier League.

And Skalak also cites an ankle problem almost straight after the deal was done to bring him to South London as another obstacle.

“I know there is more to come,” he said. “Not just with fitness, but everything. I am not at my top level.

“I would say that with confidence on the pitch and if I play more and more games then I will start to play differently.

“I had some problems about a week after I came here with my ankle. I went to see the doctor and there was nothing there. But after a hard session or a game it was swollen and bruised. Now I am okay and can play at 100 per cent.

“I feel better and better with my fitness. Of course I don’t have the starts I would like to have. I’ve created chances and we were unlucky we didn’t score.

“Every player can always play better and better. But last year was hard at Brighton.” 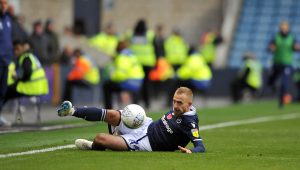 Skalak played 31 times for the Seagulls as they finally managed to secure top-flight football after recent near misses. He supplied six assists.

He believes there was a chance for him in January to work his way more into the first-team picture but he picked up a knock in an FA Cup win at Middlesbrough.

“Not playing there showed me a different experience and it was really tough because it had never happened before,” said Skalak. “After the first three months I changed in my head – I cannot be angry or sad if I’m not playing. I’ll just work hard, train hard and if the chance doesn’t come I will leave.

“I spoke to the gaffer [Chris Hughton] at the start of January and asked if I could go on loan but they had just let Jamie Murphy go to Rangers. He said: ‘I need you. You are training better and better – you will get a chance soon’. It was my dream to play in the Premier League.

“But after 60 minutes [against Boro] I got injured. I was another six weeks out and the season was finished.

“My girlfriend was pregnant and close to her due date. I was on crutches when we were going to the hospital.”

Skalak’s desire to make it in England has not waned.

German club Hamburg were interested in him before he chose Brighton in 2016 when he left Mlada Boleslav.

And he had a chance to go back to his home country when he mulled over his latest transfer.

“I told my manager I would like to stay in England. I knew about Millwall for a year, because they had already asked if I could come on loan after Brighton got promoted.

“I had other clubs asking about me in the summer but if felt Millwall was the club I wanted to go to.”

Skalak has also played for Sparta Prague. So where does the atmosphere at The Den rank? “It’s one of the best atmospheres I have ever played in – it is like you play with 12 players there. They are unbelievable, what they do for us.

“I don’t know why there is a big difference between home and away games [in terms of form]. We need that to change.

“We always look to be better than last season but that would almost mean finishing in the play-offs. We can’t look for them or think about where we will be in February. We must fight for every point and keep going step by step.”