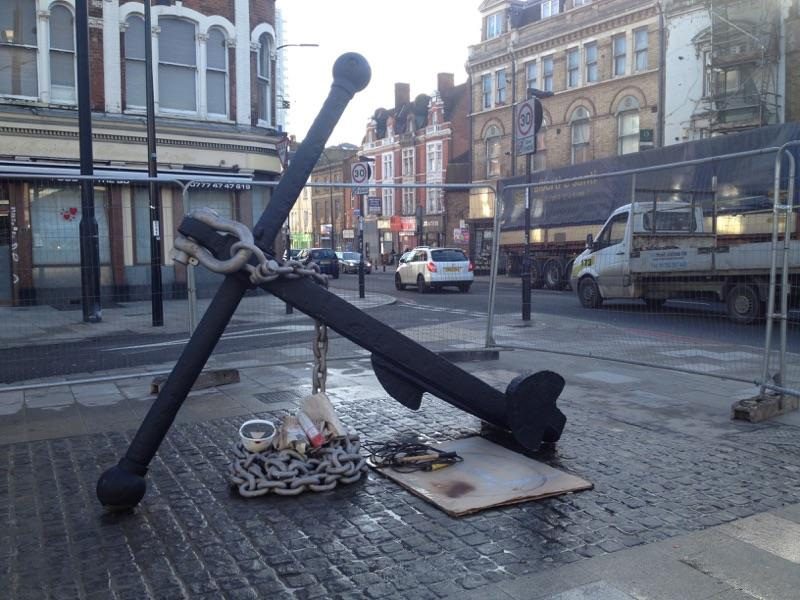 The Deptford Anchor is back. After being in hiatus for the past five years the anchor has made its triumphant return to Deptford High Street.

Residents and campaigners celebrated around the anchor with live music and dancing on Saturday.

The anchor was reinstalled earlier in the week with a plaque commemorating the occasion. 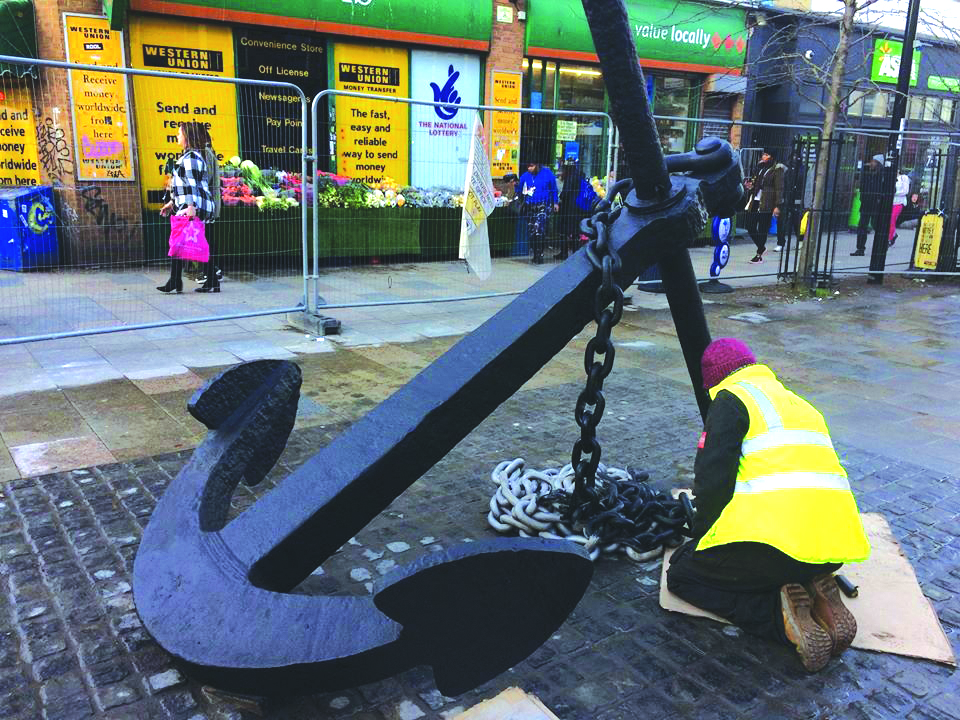 Peter Collins, chairman of the Deptford Society (DS) said: “This is a triumph for Deptford and a clear demonstration of what people power can achieve.

“The strength of feeling about the removal of the anchor was obvious right from the start.

“We are delighted that we were able to play a part in bringing back this symbol of Deptford’s maritime heritage, and we would like to thank everyone who supported us and helped us to get there in the end.”

The anchor was dropped in 1988 as a gift from Chatham Dockyard but it was raised again in 2013 and moved to a storage site following a regeneration project. 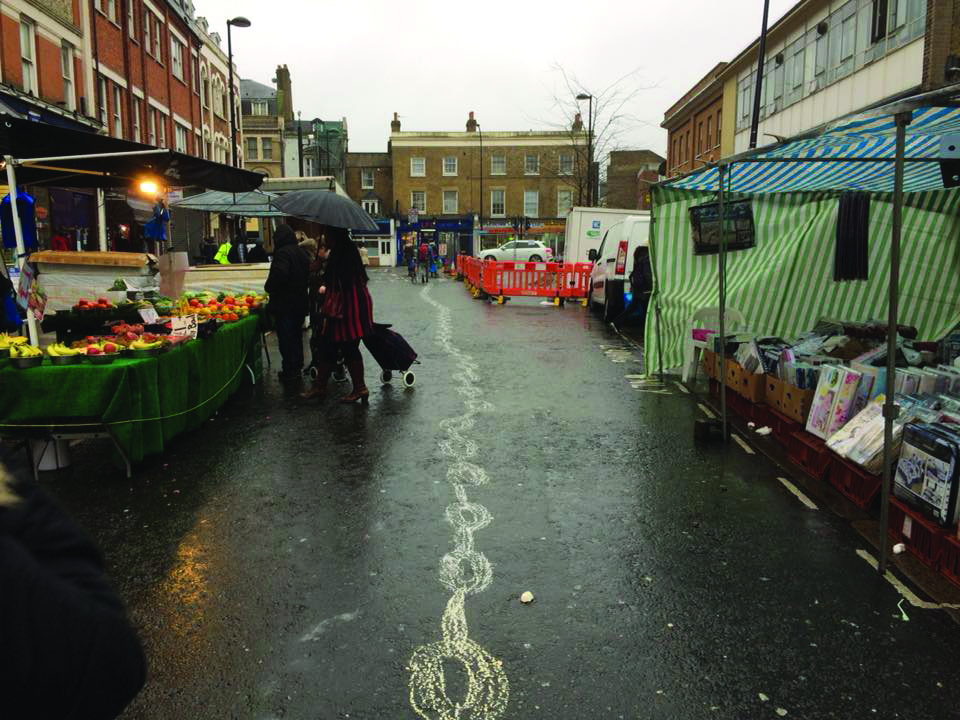 At the time, the council said the anchor was attracting street drinkers who used it as a meeting spot.

However, many residents were angered by the move and a petition called Give Us Back Our Bloomin’ Anchor was started by the campaign group Deptford Is Forever (DIF) and it quickly gathered more than 4,000 signatures.

A spokeswoman for DIF said: “The anchor represents the heart of Deptford’s identity and heritage.

“Once a small fishing village, when Henry VIII founded the Royal Dockyard here in 1513, it went on to become the powerhouse of the Royal Navy and the town grew up around it and prospered from 350 years of shipbuilding. 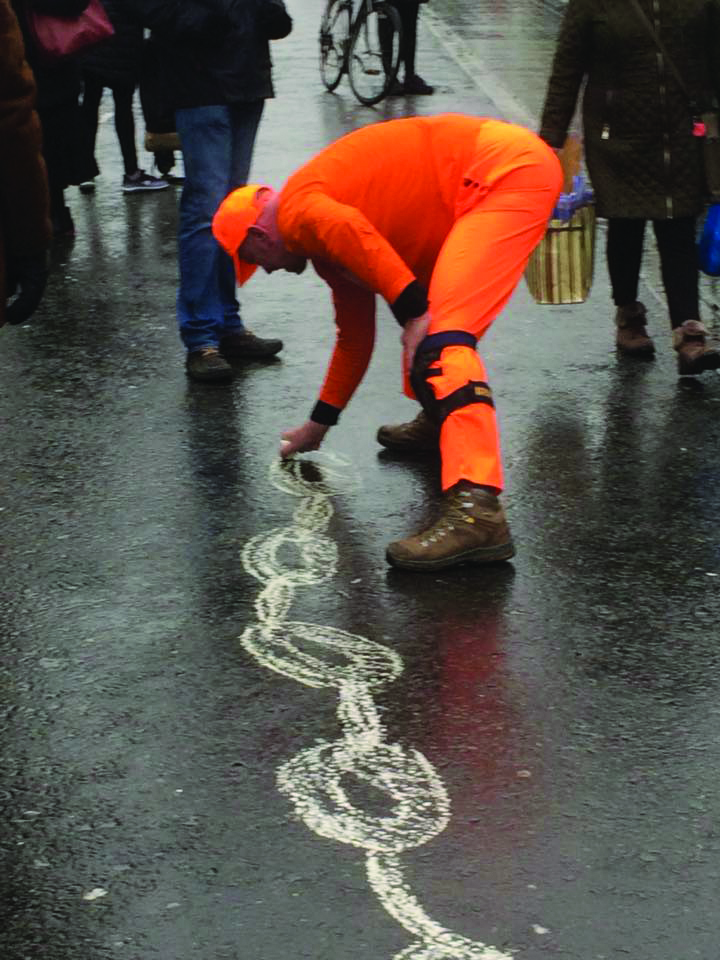 “The dockyard’s history now lies hidden beneath concrete, and the site, now known as Convoys Wharf, is owned by conglomerate Hutchison Whampoa who received planning permission in 2014 to build 3,500 mostly luxury homes there.

“An anchor means lots of different things to different people, but the Deptford Anchor as a landmark puts Deptford back on the map as something more distinctive and meaningful than just a an appendage to the City and the borough of Lewisham.”

Anchor is rooted in Deptford’s history

Enthusiastic residents have been hailing the return of the Deptford Anchor in style.

David Aylward, a Deptford resident his whole life, drummed his way up the high street rattling out a beat on everything that came in the path of his drum sticks.

On top of this he drew a mammoth anchor and chain along the street using chalk taken from the nearby Deptford Beach.

Mr Aylward, 56, is co-founded the Deptford Is Forever campaign group. He said: “The drumming was just an audio announcement of what we are doing. 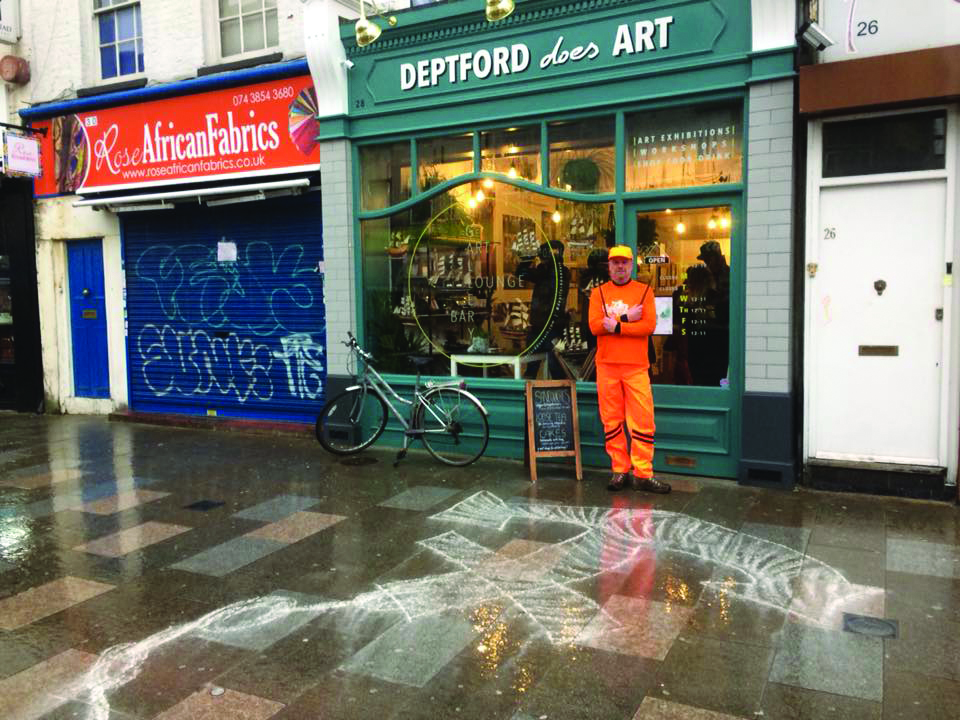 “I wanted to break the air, get people to look up. Everything thing we’ve done through the years, whether it’s the petition, exhibitions, processions, they’ve all been about engaging with the community and keeping the idea of the anchor alive.

“Now here it is back to reality. It feels excellent.”

Mr Aylward is a performance artist andhe has frequently integrated his art into the anchor campaign such as drawing replica anchors in chalk on the street through the years and dragging a giant wooden anchor up the high street.

He said: “The anchor became a symbol to rally around. It’s all tied up with the general regeneration schemes that are going on around the area.

“Regeneration is a reality and local people need to be kept in the frame and part of the decision-making.

“With projects like Convoys Wharf I feel we were being alienated from our homes.

“Then I watched the anchor disappear.

“To lose such an iconic symbol on the back of that was unfair. And that kind of kindled the flame to get the campaign up and running.”

Mr Aylward joined other campaigners on the street on Saturday to celebrate.

He said: “It’s very much about celebrating with the people rather than a ribbon council Mayor affair.

“One thing I love about Deptford is that there is so much people power.

“Everybody rallied round and the consistency of four years of campaigning has pulled it back.

“It’s a real celebratory moment of people having a say.”