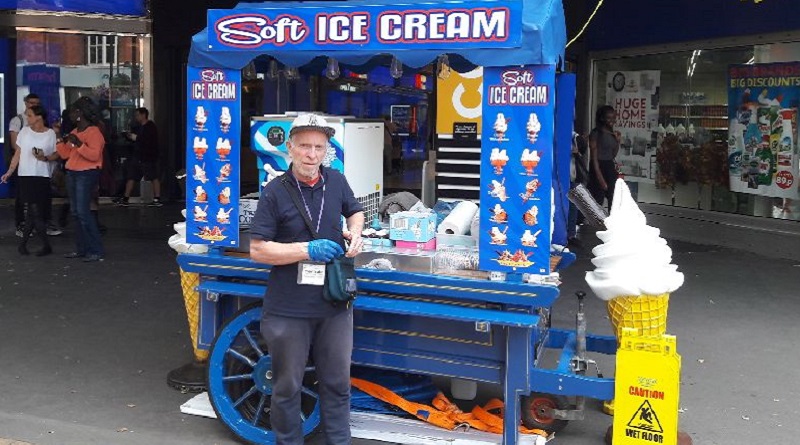 A family-run ice cream business has been forced to trade from a cart with one plug after being forced from its shop.

Patrick and Sarah Kirwan, from Purley, run Bellamy’s Ice Creams and were one of 21 businesses evicted from the Croydon Village Outlet with short notice when Croydon council officers placed locks on the doors more than two weeks ago.

The authority made a compulsory purchase order on the land, which is set to
become a Westfield centre, and decided to lock the business tenants out to
undertake a site survey.

This left 109 employees at the outlet in the lurch, and pandemonium took over when business owners and workers attempted to enter their businesses on July 16.

And the Kirwan family say they have been dealt a huge blow to their earnings during their peak season.

Patrick Kirwan, whose van was also repossessed by bailiffs on the day, said: “No warning was given at all, despite our efforts of trying to work with the council months before, so this situation did not occur.

Unlike other units, we make our profits purely in this weather. We specialise in ice cream, traditional soft ice cream, slushes, hard scooped ice cream, lollies and cold refreshments.

“We sell at cheap prices aimed at providing for local families. We make losses
during winter, but the heatwave summer period is where we earn our main yearly family income.

“We have been completely destroyed by the situation we are now in. We have had zero help from Croydon council.

“They have literally walked in and swiped our family business from beneath our feet.

We are not going to survive. We not only stand to lose our business, but even our family home.

“We have three young children and mortgages and bills to pay. We are struggling so badly financially and mentally and we so desperately need somebody to help us. We have lost thousands of pounds over the past week and we won’t be able to recover from another four weeks of closure.

“This is the minimum they have stated its closed for, but have said it could be longer or closed indefinitely.

“We work hard for the Croydon community and how we have been treated is
absolutely disgusting.”

Traders from the outlet have been offered six months’ free rent at Croydon’s
Centrale and Whitgift shopping centre, but Bellamy’s Ice Creams has had to secure an ice cream cart outside the centre as it cannot move its heavy machinery inside.

Patrick added: “We have managed to secure a cart with a single ice cream machine outside Centrale.

“The rent we are paying to trade with a single plug socket is very high.

“We are still hoping we can go back to the our unit, however surveys need to be completed which can still take another two to four weeks to complete.

Nobody really knows how long it could be closed for.”

The Kirwan family say they have been told by the council to take up any loss of earnings complaints with the new Westfield Centre.

A spokesman for Croydon council said: “Croydon council and Croydon Partnership (CLP), who are managing the former Allders building on our behalf, have been in continuous contact with the businesses affected by the council taking possession
and subsequent closure of the building.

“The closure has been required to enable CLP to undertake statutory surveys of the site.

“Affected traders have been given access to the site to collect equipment, stock and other belongings.

“The council and CLP have also offered all businesses support and advice, as well as the opportunity to relocate into the Whitgift Centre.

“Many of the businesses have taken this offer up and are in the process of relocating.

“This support is still on offer and we remain committed to getting all businesses trading again swiftly.”

There were also reports that council officials had pushed over an elderly man when he refused to hand over a remote control for a shutter though the council have denied this after reviewing their officer’s body cam footage.