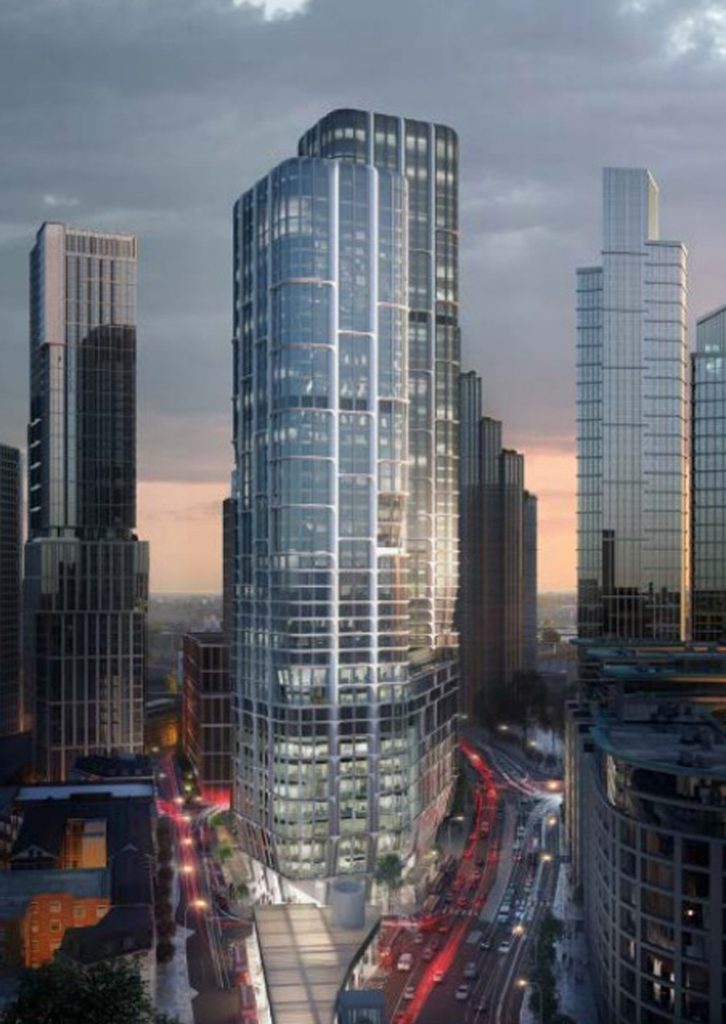 The demolition of a bus station will make way for one 53-storey and one 42-storey tower, both designed by the firm which created the 2012 Olympic swimming pool

Plans were revealed last month to flatten the terminal at Vauxhall, which has only been in existence for 13 years.

Owners VCI have now revealed they want to construct twin towers near the Tube station, and a short walk across the Thames from the House of Commons, and a new small park, between the towers and Vauxhall Tube station.

The office blocks and hotel on Vauxhall Cross Island – designed by Zaha Hadid Architects, creators of the London Aquatics Centre and the maths centre at the Science Museum — will be connected by a podium which is itself 10 storeys high.

The £600million complex is expected to make £47million for the developers, according to their own viability study, with the work being engineered by Buro Happold.

The project is being managed by Great Marlborough Estates (GME), which said its plans would provide “improved pedestrian environment and experience; helping to create a safer and more legible streetscape, accommodating the increasing pedestrian activity between Vauxhall Station and Nine Elms.

“The design responds to Lambeth council’s aspirations for a district centre for Vauxhall by creating a vibrant new public square adjacent to the busy rail, underground and bus interchange.

“The proposal also accommodates TfL’s existing plans to upgrade the traffic gyratory and bus station to provide greater accessibility and safety for all.

“This project will generate approximately 2,000 new jobs in the borough within a mixed-use design that includes a new public square, homes, offices, shops and a hotel – providing vital civic space, amenities and employment for the growing Vauxhall community.

“The new square creates a generous public space next to the primary pedestrian route from Vauxhall station to the south and next to TfL’s new bus stops located on Bondway, allowing the square to host a programme of community events throughout the year, from markets to street entertainment and performances.

“We want to work with the community to identify how the square can be used to provide the greatest benefit to Vauxhall and what types of activities or events can be held here.”

The site is within the Vauxhall/Nine Elms/Battersea Opportunity Area, which the London Plan zones for high-density development, jobs and homes – up to 20,000 homes are being built there as part of the Battersea Power Station development and other projects.

Previous owners Kylun Ltd was given permission to develop the plot in 2012 and VCI bought the site from the firm in the intervening period.

“Concreting over such a large amount of open space is in contravention of the council’s own policy of ‘depaving’ to mitigate flood risk.”

Residents complained about the loss of the bus station, which TfL has been planning for more than eight years.

One resident said: “This is a clear case of developer-rules-all. The bus station is a local asset and will be replaced by a lesser functioning less safe patchwork of stops in order to achieve the desired tower footprint. By all means remedy the gyratory, but keep the bus station as it is. Plan your ivory towers accordingly, but let people get to their homes and workplaces safely and happily.”

Another said: “The proposed development does not respect its surroundings – bland, imposing and overbearing and in breach of planning guidance re height and density, but this has now become almost commonplace.

“However, it does not even respect the most recent plans for a new bus station facility on which TfL had ‘extensively’ consulted (the consultation being widely regarded as highly manipulative).

“The proposed land swap means that rather than having a significant number of bus stops either side of Bondway, it now looks like the island site itself is to become a bus station of sorts, with the proposed development acting as a massive barrier between bus stops.

“It will also cut off the promised (much vaunted by TfL) road traffic free plaza linking the railway station with the bus station.”

Another person wrote to Lambeth council: “The proposed development is on a gargantuan sale, adding to the horror of the riverside developments that have been allowed in recent years. There is no need to add to those.

“There is evidence that many of the new flats in the various towers are not even occupied, but being used as savings funds for rich people, so offering nothing for local people. How can this proposal benefit Lambeth residents? Please have a serious rethink.”

But one person said: “When Trump made the ‘off-location’ comment, he was surely looking at a picture of the Vauxhall bus station and Vauxhall Cross.

“I strongly supporting this development, it will not only look fantastic, but will create the cluster needed to make other tall buildings in the area look right. I am also looking forward to go to that restaurant at the top of the building. Let’s build it and let’s do it quickly.”

And another said: “I strongly believe that taken together, all these plans will transform Vauxhall Cross into a far better environment for everyone than what it is today.”

A TfL spokeswoman said: “We are working closely with Lambeth council to re-introduce the safer two-way road system in place of the one way system at Vauxhall, which was supported in public consultation. The current bus station was created for the one-way road system so needs to be completely redesigned to allow buses to operate. These changes will enable us to create not only safer roads, but also new public spaces and improved cycle lanes and pedestrian facilities and more efficient bus routes.”

One thought on “Huge towers to replace Vauxhall bus station”