Crystal Palace once again had Wilfried Zaha to thank as they came away from Huddersfield with all three points.

It was the Eagles’ first Premier League victory since their opening day exploits over Fulham at Craven Cottage, where Zaha had proved to be their saviour.

Jordan Ayew was brought in for the injured Christian Benteke and made an impression on his full debut.

He found himself with the ball deep into Huddersfield’s half of the pitch and played in a ball wide on the left to Zaha who then stood up to his two markers, ran inside and fired in an unstoppable effort into the far corner of Jonas Lossl’s goal with 38 minutes on the clock.

It had not been a classic up until that point, nor would Zaha’s magic prevent the game from reverting to type.

The first opportunity of a testy opening 45 minutes arrived when Steve Mounie headed over a 17th minute cross from Chris Lowe.

Referee Lee Mason felt inclined to stop the game from flowing with his whistle constantly interrupting any attempt to bring some tempo to a dull game. It did a physical Huddersfield side more favours than the visitors, although Palace saw James McArthur booked early on. 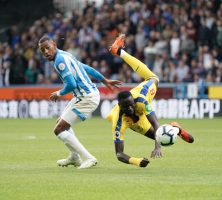 Zaha was frustrated at constant niggling tackles being ignored by Mason and took revenge on the hosts by charging in late down by his own corner flag. The hosts were baying for blood throughout, as many teams have, in an attempt to get him sent off.

Christopher Schindler wasted a half-chance as he attempted a spectacular overhead kick from Philip Billing’s knock down, only for it to fly over Wayne Hennessey’s crossbar.

Then came Zaha’s superb finish to relieve the Eagles’ tensions somewhat and put Palace 1-0 up late in the first half.

The second half began in much the same vein as the first. Huddersfield continued to probe with half-chances and the visitors struggled to create much themselves. Jordan Ayew was isolated in a fluid front three which regularly became a 4-5-1 formation, but Palace continued in their attempts to lump long balls for him to hold up. It rarely succeeded.

Aaron Mooy was desperately unlucky not to pull his side level on 58 minutes when his piledriver cannoned off the post and across the goal line and into the box but Palace scrambled clear eventually.

As the hosts sought to push forward in search of an equaliser, Palace’s gameplan became far more evident. Counter-attacking football under Roy Hodgson is not a new phenomenon, and it came alive towards the final third of the match.

Ayew excellently held up a long clearance for Townsend on 62 minutes and the winger duly returned the favour by squaring the ball, but his teammate shanked his effort, only for it to fall to Zaha who also failed miserably to convert a golden opportunity to put the game to bed against a Terriers’ side clearly lacking and semblance of a plan B.

Just three minutes later Mamadou Sakho had the ball in the back of the net, only for it to be disallowed for a foul.

Palace sat deep for the remainder of the game and Hodgson showed no sign of making a substitute to ease the pressure on his players.

With three minutes of normal time remaining Mooy once again smashed an effort from the edge of the box. His half-volley found Mounie who contrived to fire wide but was offside in any event.

But the Eagles held on to a precious victory which was scarcely deserved from a drab, physical match.